Shoal Creek Trail is one of Austin’s most historic trails. Constructed in 1970, this trail is 3.9 miles long and offers a pathway for runners, walkers, and bikers to casually traverse the city of Austin while still enjoying the natural landscape alongside Shoal Creek. Shoal Creek Trail passes through Pease Park and Duncan Park, stretching from the north shore of Lady Bird Lake to West 38 Street. Users of the trail will experience an abundance of wildlife underneath the canopies of the large oak trees that outline the trail and even the opportunity to visit a breathtaking passageway through a rocky canyon on the north end of the trail.

A couple walking along the paved trail with their pet. (September 2019) 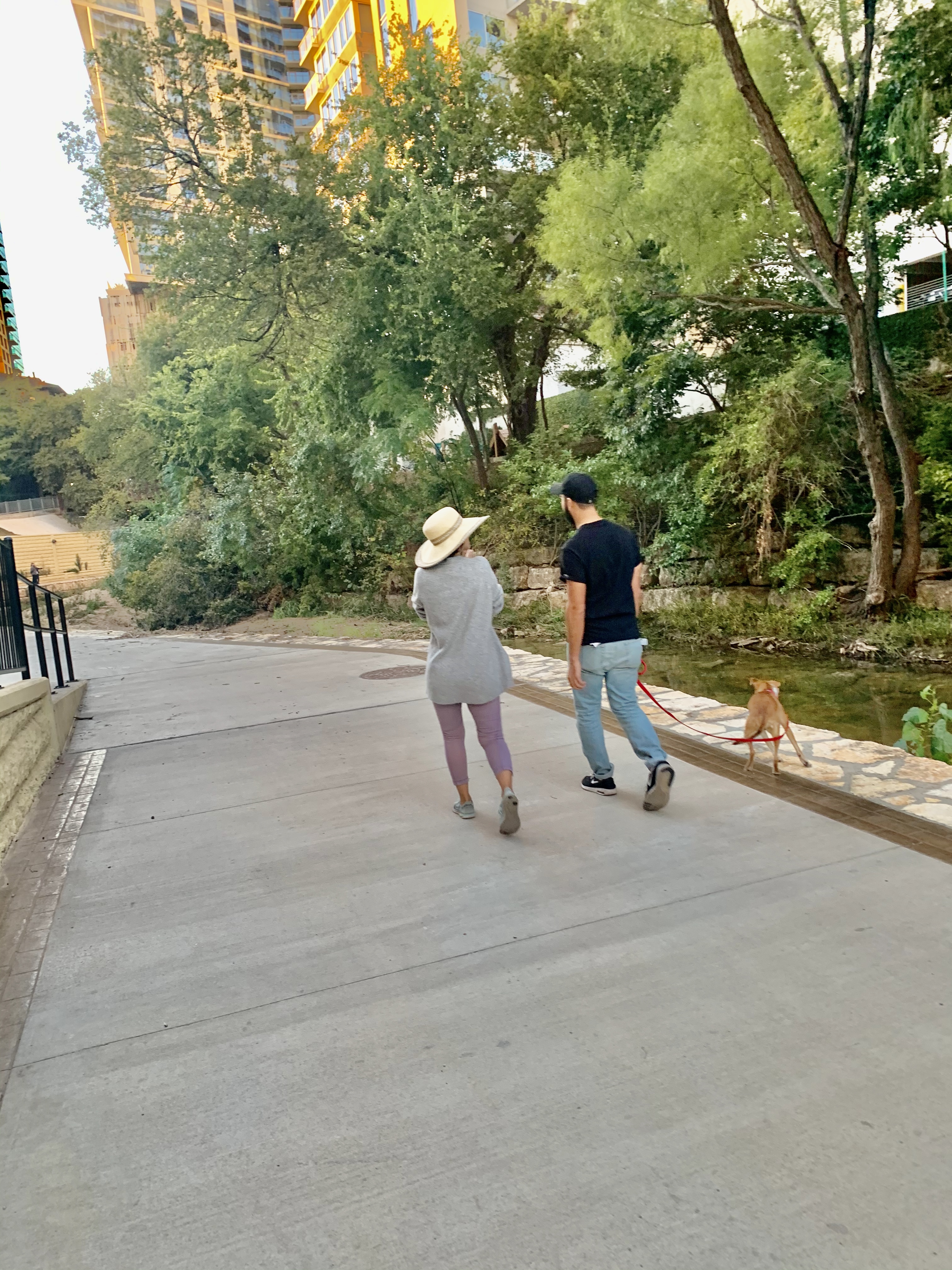 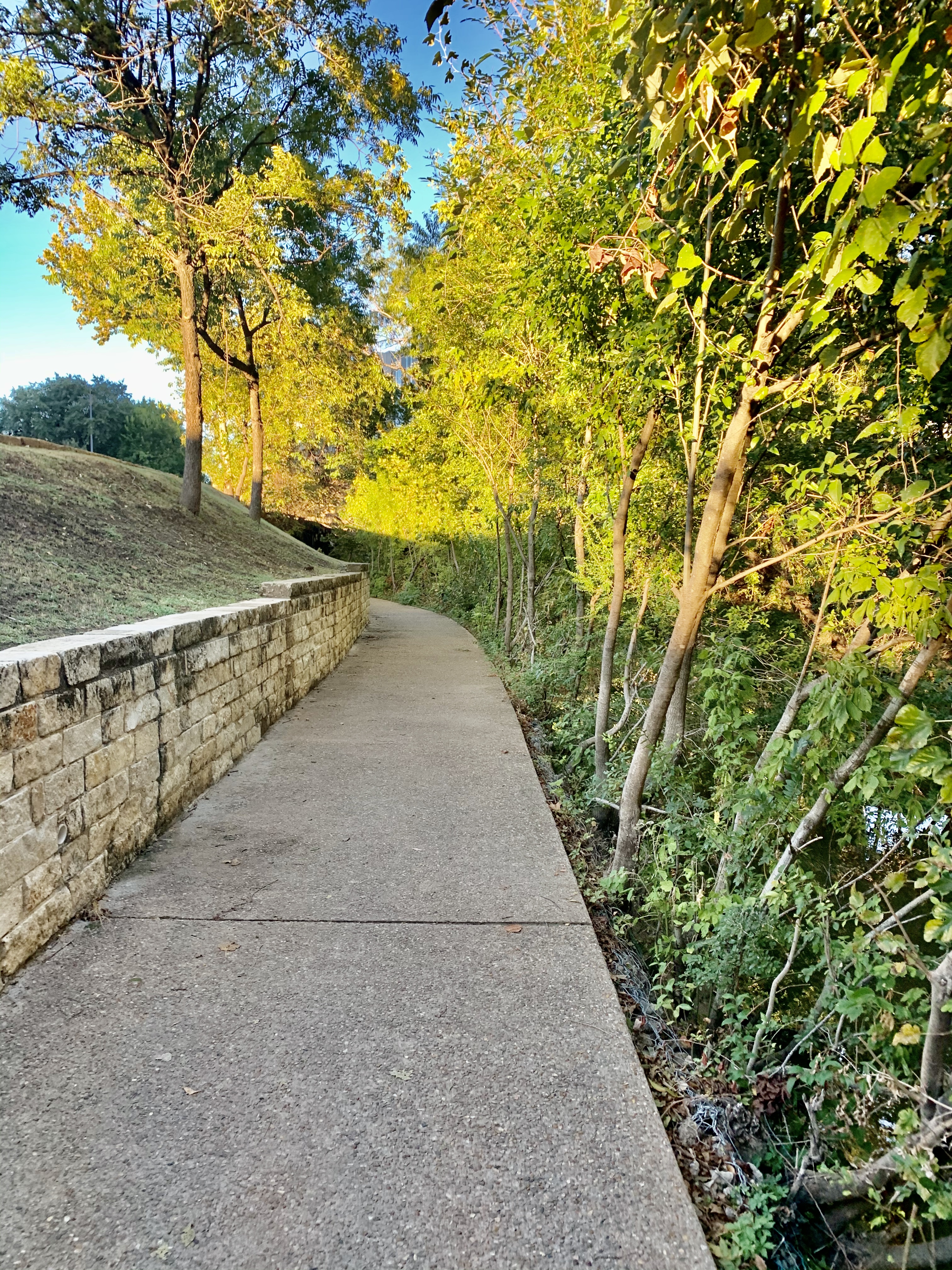 The trail intersecting with a stone staircase entrance. (September 2019) 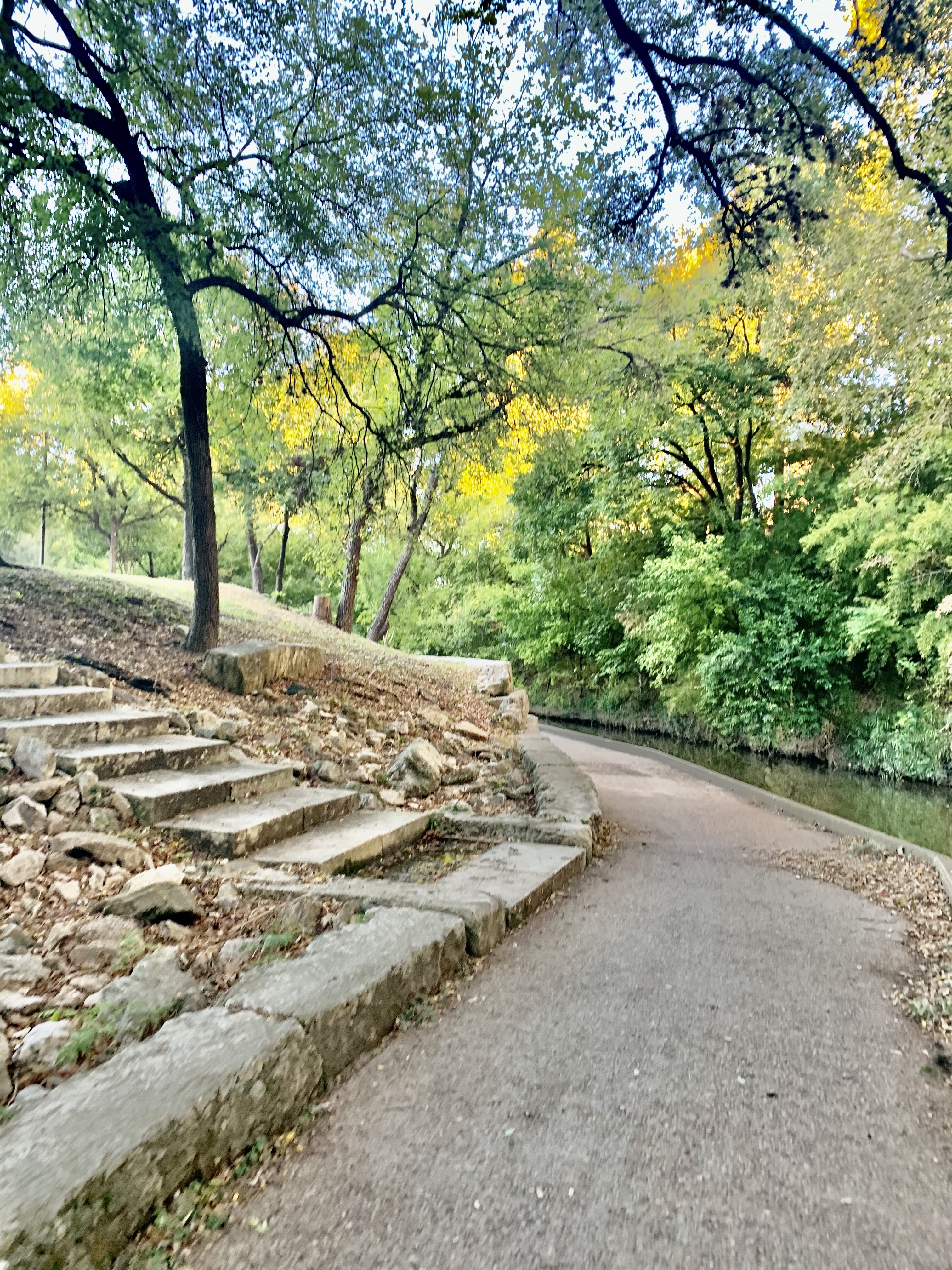 A current photograph of a section of Shoal Creek Trail. (September 2019) 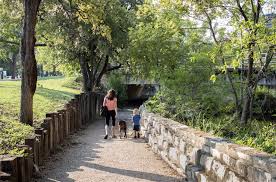 A clearing in the trail with a bench to rest on. (September 2019) 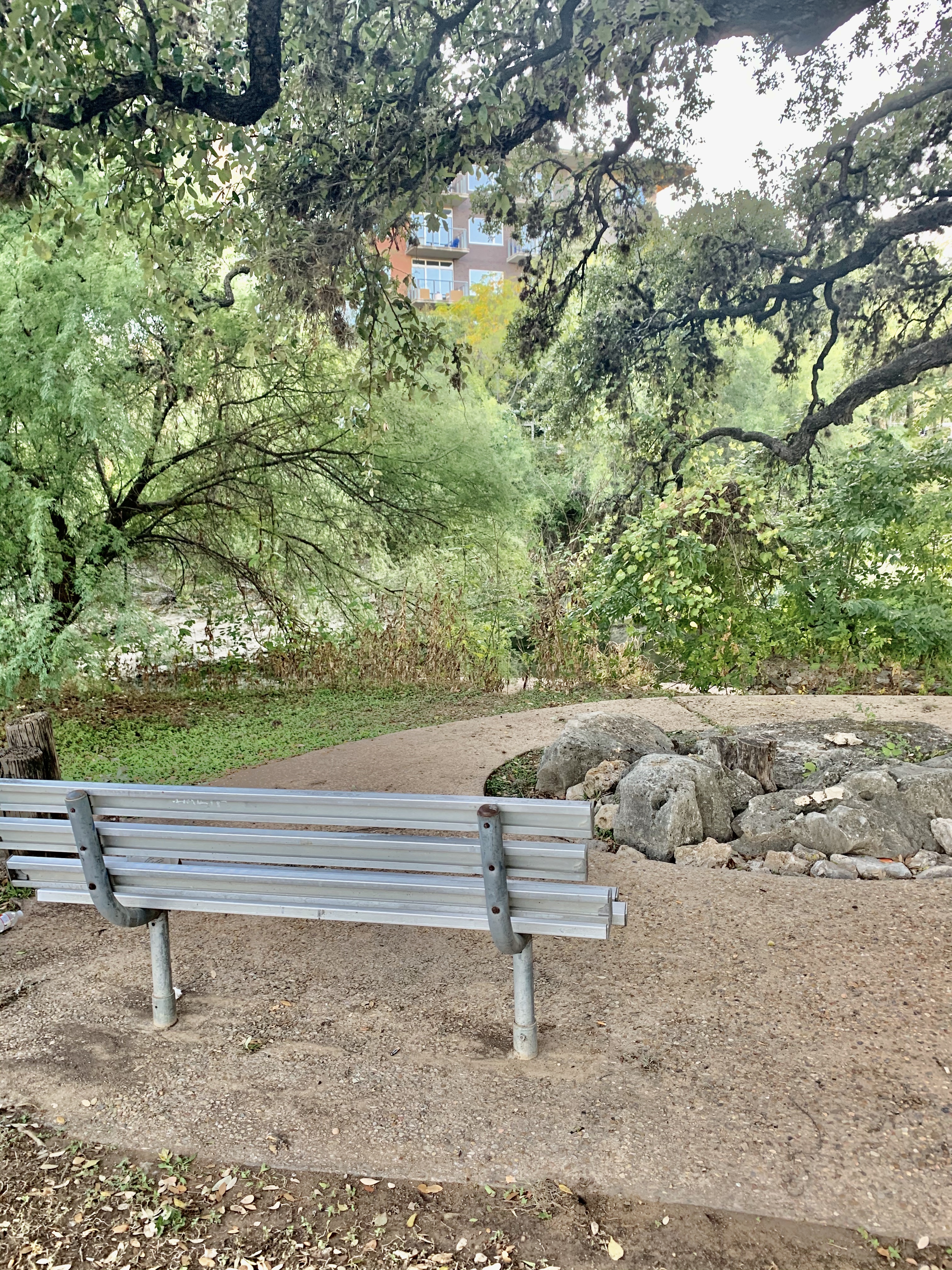 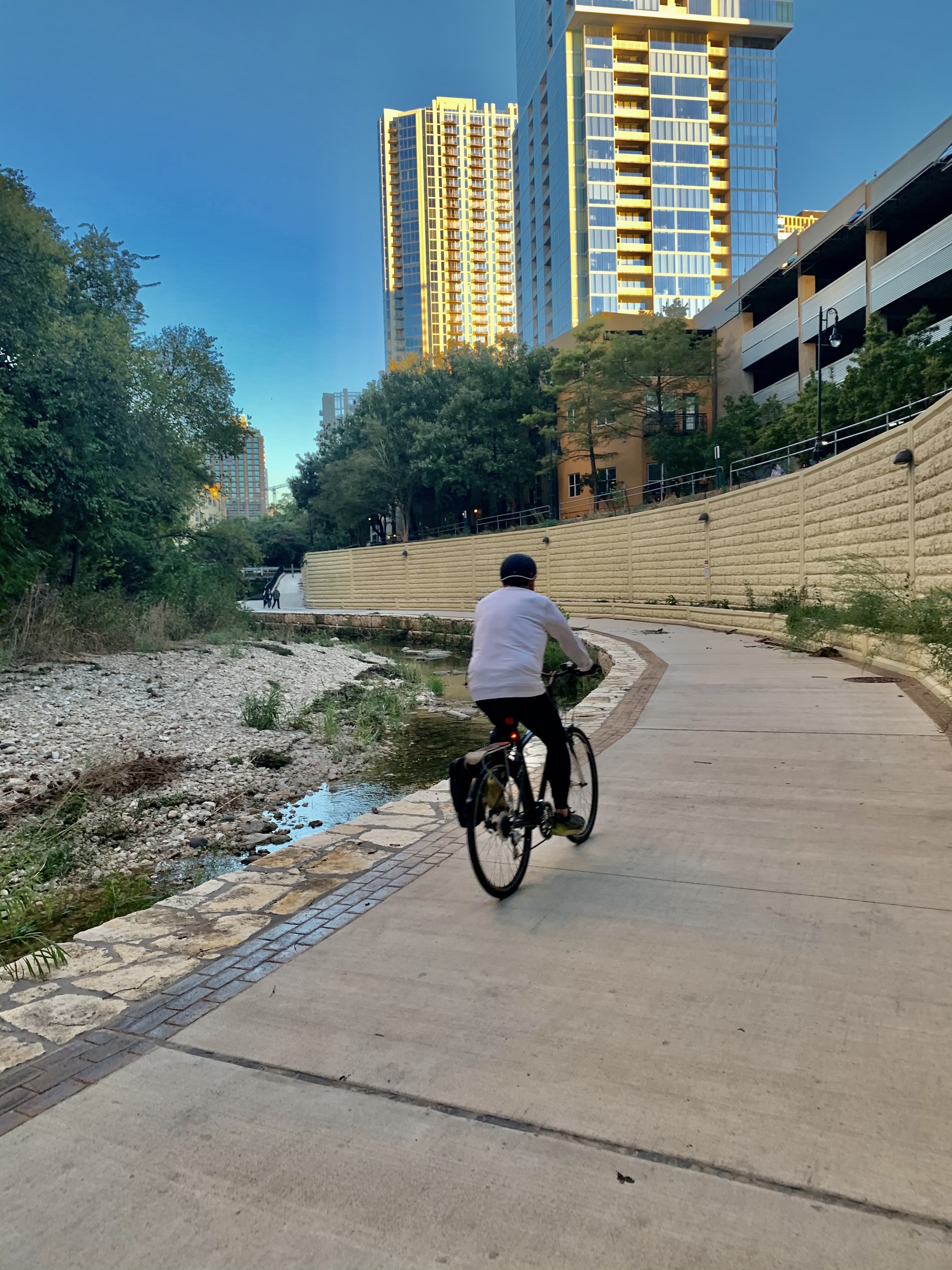 An illustration of what the proposed trail expansion would look like once connected to the existing trails, which will then be called the “Big Loop”. 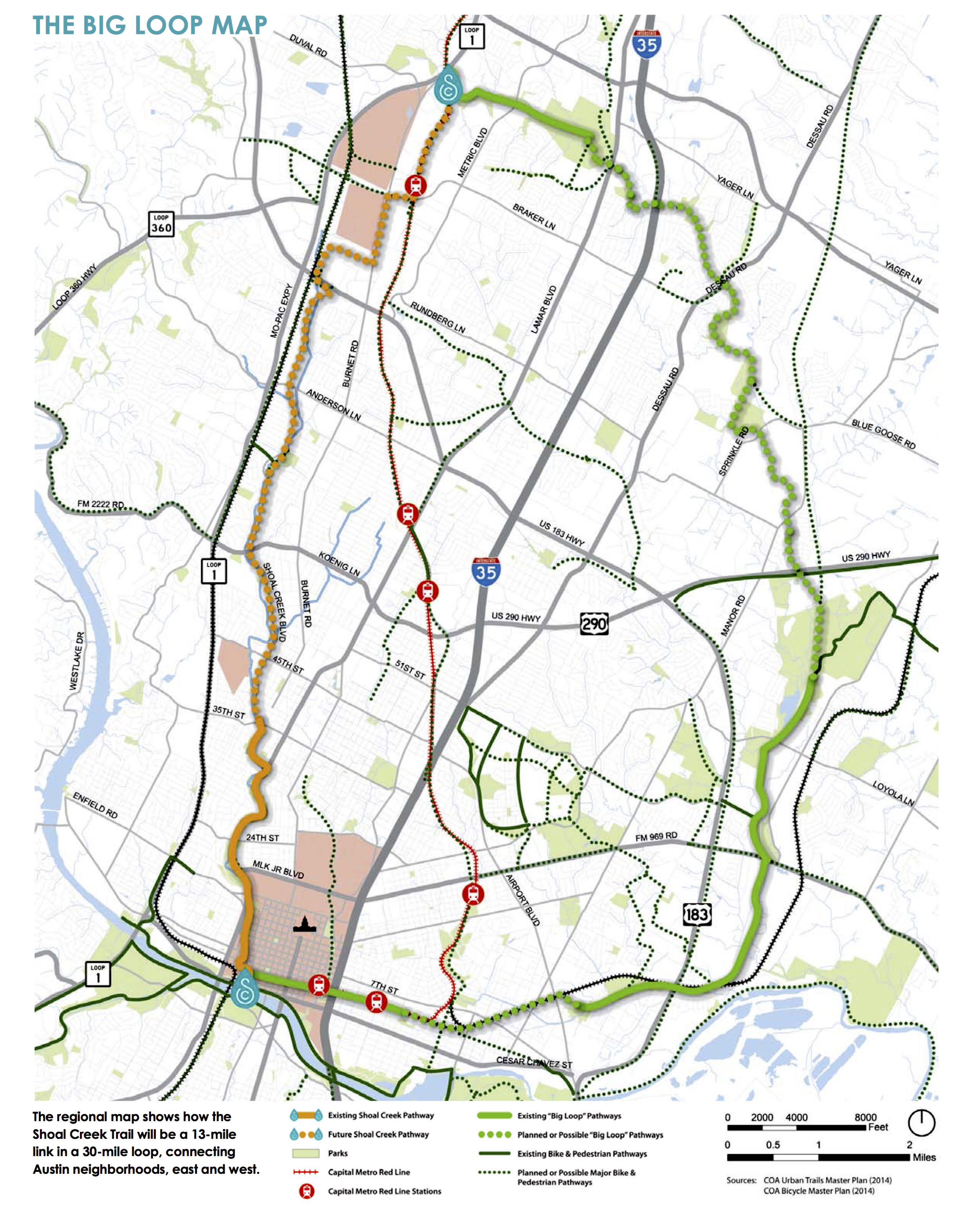 A photograph of the destruction caused by the 1981 Memorial Day Floods. 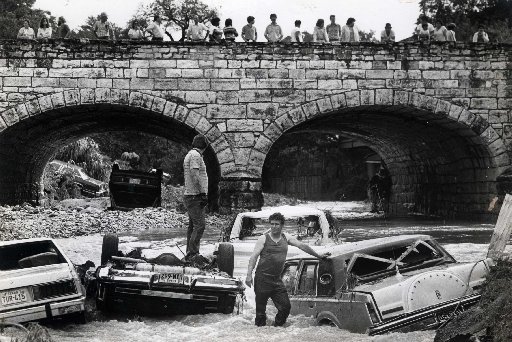 The destruction of the Memorial Day Floods of 2015, an entire football stadium is engulfed by flood water. 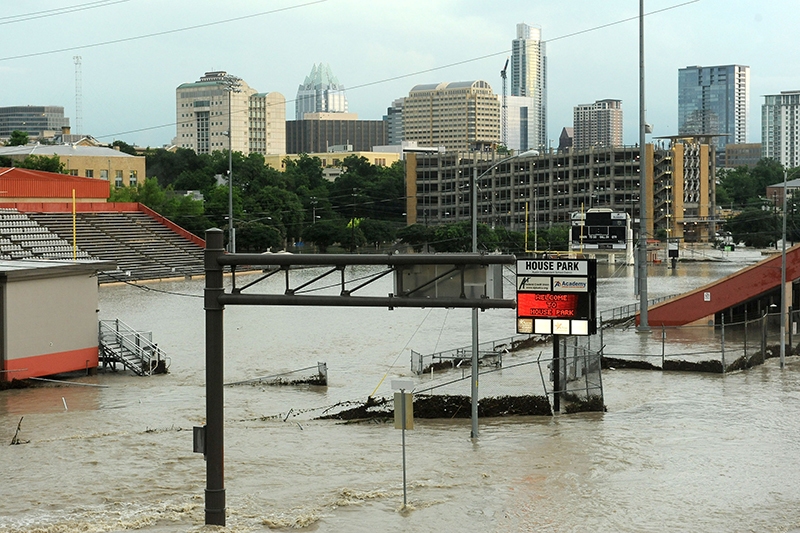 Running for sport has been around since as early as 1829 B.C. It was not until the 1960s, however, that running for recreation became popular in the U.S.1 This was not the traditional concept of running for sport or competition, it was running for the pure enjoyment of the outdoors with the attempt to live a healthier life. This fad was soon adopted as the new norm and since then, millions of miles of sidewalks, parks, and trails have been constructed to accommodate recreational running.2

Austin, Texas decided to hop on the trend shortly after it gained popularity and constructed what is now known as Shoal Creek Trail, in 1970.3 Austin took advantage of this trend and wanted to give its citizens a natural but appealing landscape to run and exercise outdoors. Shoal Creek Trail is 3.9 miles of running and biking surface that extends from the north shore of Lady Bird Lake to W 38th Street. Through the years since its construction, the trail has seen poor maintenance and has inconsistent paving types. Despite these negative aspects, the trail is still heavily used to this date.

Although this trail is now a beloved escape from the urban scene of Austin, the proposal of the construction of this trail was met with a strong opposition. The Austin American-Statesman reports that people were worried about the trespassing and crime that it may bring, and some were saying it would be an “invasion of privacy” for those who had grave plots in the proposed trail path. George Stanton, a resident in the nearby area, stated that the trail “will only invite trespassing and crime. I will fight as long and as hard as I need to in order to prevent this trail."4 Others voiced their worries that the construction was not necessary and would raise property taxes in the surrounding area. Although the voice of opposition was prevalent, there were a few who saw the positives of the construction of the trial stating, “Biking is an increasing mode of transportation, this is something we have got to realize and encourage."5

The Colorado River runs directly through the city of Austin. There are also many creeks and streams that branch from the river and extend throughout the city. This causes the Austin area to be very prone to flooding. In May 1981, more than 10 inches of rainfall fell in less than four hours.6 This caused Shoal Creek and a couple of others to rise out of its bank and flood the surrounding areas. The creek which is normally a foot deep was reportedly 15 feet deep at its peak. This flood caused $40 million in damages and the death of 13 people.

More recently Austin experienced what was later dubbed the “Memorial Day Floods of 2015.” In the same week of May of the 1981 floods just 34 years later, Austin once again experienced a substantial amount of rainfall in a relatively short amount of time. The Governor of Texas, Greg Abbott, called the 2015 floods “the highest flood we’ve ever had recorded in the history of the state of Texas."7 This flood caused massive destruction all over central Texas. There were a total of 14 casualties and over 2,100 homes were destroyed or severely damaged.8

There is no doubt that these floods have had a huge impact on the history of the people and the city of Austin. However, the floods also have a big impact on the future of the city as well. It is common knowledge to not build permanent structures in a flood-prone area. The issue with Austin is that, because the Colorado River runs right through the city with a couple of streams branching off, a large portion of the city is in flood-prone areas. This becomes a problem for people who are hoping to build large structures and buildings near some of these creeks and streams. Indirectly, this has allowed parts of the Austin landscape to remain relatively natural and untouched. Since people are avoiding the flood-prone areas, there is a lot of room for nature trails and parks to be built. These trails run right alongside the creeks and since the land remains untouched, these trails have been able to flourish and even be expanded to accommodate a higher demand for nature trails.

Shoal Creek Trail is one of the more prominent trails in the Austin area. It is a natural landscape that gives runners, walkers, and bikers room to traverse the city how they please. Despite the trail’s past poor maintenance, as previously explained, the trail has been and is still used extensively. The city of Austin has taken note of this, and now there is a plan called the “Shoal Creek Trail: Vision to Action Plan."9 This plan not only addresses the maintenance issues of the trail but also proposes a plan to extend the “Urban Nature Trail” by 9 miles. This extension would connect the Shoal Creek Trail with the existing “Big Loop” pathway. Connecting the Shoal Creek Trail with the “Big Loop” would create a 30 mile continuous Urban Nature Trail that covers the city from Lady Bird Lake (the part of the Colorado River that Austinites claim) to Walnut Creek Park. This major expansion is only possible because of the lack of desire to build in the flood-prone areas. This has created a rare occurrence and has allowed the city of Austin to maintain its natural landscape, accommodate nature enthusiasts, while in the midst of urban sprawl.

1. Peoples, Megan. The History of Running as a Sport and as Recreation, The Hub - Enmotive. Accessed October 16th 2019. https://hub.enmotive.com/post/history-running.

2. Peoples, Megan. The History of Running as a Sport and as Recreation, The Hub - Enmotive. Accessed October 16th 2019. https://hub.enmotive.com/post/history-running.