May 17, 1864 The largest engagement of the Civil War in Madison County was fought during a driving rainstorm here at the site of the railroad depot. Under the command of Col. Josiah Patterson, the Confederate forces (~1000 cavalry and a battery of artillery) crossed the Tennessee River near Triana and attacked a garrison of ~350 men of the 13th Illinois Infantry. Union forces fell back along the railroad toward Huntsville to Indian Creek. They counterattacked after being reinforced by infantry from Huntsville. Confederates were forced back across the river after burning equipment and cotton at the depot. Casualties were light on both sides. 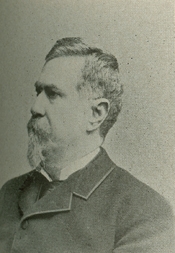 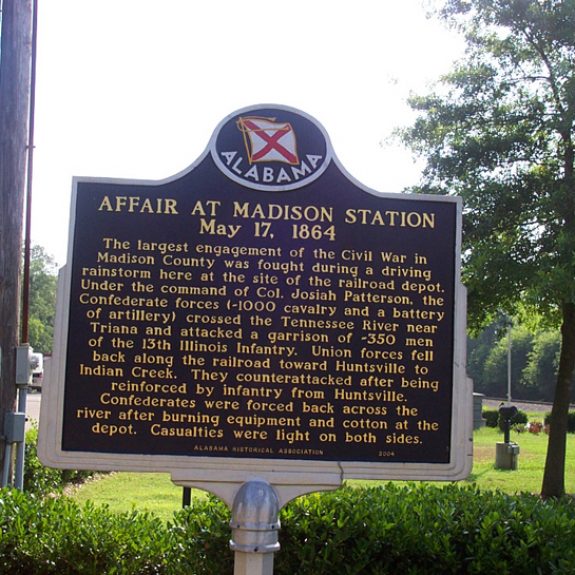 Confederate reports are sparse from those last months of the war, but there are numerous documents of the engagement preserved in Union accounts. The most descriptive Union reports were filed by Colonel Gorgas of the 13th Illinois Infantry. He first told that a cavalry force of about 1,000 with four artillery pieces attacked on May 17 about 8 o'clock in the morning. When General John Smith reported the engagement a day later, he stated that Madison Station had been attacked at 8 a.m. from all directions by a large force, numbering about 1,000 to 3,000 men with four pieces of artillery. Gorgas recounted that “...we were obliged to fall back, after a severe fight, and, being completely surrounded, we cut our way through their lines, and fell back to the bridge and water tank, about three miles east. We formed and returned to this place (Madison), and, after skirmishing, drove them from the town. They captured several of our men, what number we are not able to say. Our camp and garrison equipage, together with all the regimental and company papers, are either destroyed or carried off. The depot buildings are burned, together with about 50 bales of cotton. (He said 70 bales in a later report.) The railroad is all right, telegraph lines cut. We are left here without rations, and but little ammunition.”

A much more detailed account of the engagement was filed by Gorgas a day or so later. In it, he specified that the artillery consisted of “four 12-pounder howitzers”. He wrote that the attacking force was under the command of Colonel Josiah Patterson and included “two regiments of mounted infantry”. He blamed the successful surprise upon local citizens guiding the rebels to the locations of his five pickets, who were then overwhelmed before they could sound the alarm. In fact, subsequently the Union occupiers arrested Madison residents Dr. Richard Matthew Fletcher, Edward Betts, and James Harvey Pride. They were taken into Huntsville to be tried and hanged as spies for complicity in the event. After a gallows was constructed, a recently-transferred and remotely-located but friendly senior Union officer who knew that Dr. Fletcher had compassionately treated Federal soldiers during the occupation years came to Huntsville and had the men released.