The Big MTV Moon Man is an iconic landmark in the city of Sanford that catches people's attention on a frequent basis; it symbolizes the true American music culture and its growth over the years. The massive figure stands at 15-feet and can be seen at the Acme Industrial Surplus while driving by, but it can also be spotted from the I-4 Highway. 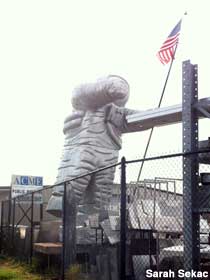 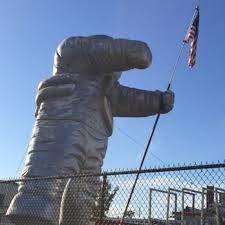 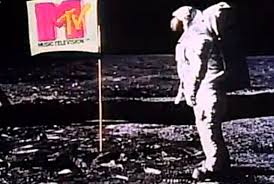 The Big MTV Moon Man, is a figure of a Moon man made of Styrofoam which stands 15-feet tall in 1461 Kastner Pl Sanford, FL; This giant, silver astronaut made of Styrofoam that is holding an American flag was built for MTV and is safely locked inside the back lot at Acme Industrial Surplus, also view-able from the I-4 West on-ramp from 17-92 by the Central Florida Zoo near Lake Monroe in Sanford.  The Acme Industrial Surplus is a company that has been open for over 20 years and has over 10,000 square feet of warehouse where they store materials including, brass, stainless steel, granite, copper, and pretty much anything else.

Acme Industrial Surplus acquired the MTV Moon Man to attract people to their  locally owned business, but why is the big statue a thing? MTV debuted in August 1 of 1981, following the radio’s top 40 format, MTV introduced music videos and music news in between those music videos which was revolutionary for cable television. MTV became increasingly relevant as it introduced some of the biggest artist to the music scene; the author stated “The network brought success to such newcomers as Madonna and new wave icons Duran Duran, who used increasingly sophisticated techniques to make the visual elements of the video as important as the music.” Such innovation brought MTV Cable Television Network great amounts of popularity. Today MTV is one of the biggest if not the biggest music network in the world.

The icon was created as MTV’s mascot/logo in 1981. The Moon Man’s first appearance was in the debut of MTV’s introduction video, where man in a spacesuit appears planting the MTV logo on the ground. In more specific detail, the creator of the Moon Man called Pat Gorman speaks about the subject and explains why the Moon Man is so important to MTV. In the article Gorman expresses “On August 1 of that year, MTV launched with footage of a literal launch. The video in question showed the Apollo 11 space shuttle firing off the ground, then segued into an astronaut planting a flag emblazoned with the MTV logo on the moon’s surface. A voice over proclaimed, “Ladies and gentlemen, rock and roll.” And thus, MTV was born” (Roth).

It wasn’t an easy job to come up with a final model for the Moon Man, the creators of the iconic figure explain how difficult it was to get the projected result right. Roth claims that there were 3 different models considered, those were a sneaker, a container of popcorn (which was later used as the MTV Movie Award statue) and lastly the Moonman. When the first MTV music awards were being organized, the directors of MTV were puzzled in the idea of creating a suitable trophy for the award ceremony. It was up to MTV’s creative director to come up with the trophy before the awards as Madeline Roth stated in the article, she stated, “The first design, Gorman says, was “horrible” and featured an astronaut wearing bell bottoms. The second design wasn’t right either: both the Moon man’s feet were planted firmly on the ground, something Gorman vehemently opposed. Frustrated and frantic, Gorman ended up sculpting the statue herself, but there was only time for five finished trophies to be made.” After the 5 trophies were done, MTV was able to conduct the first MTV music awards (VMA’S) in 1984.

Now that the history of the Moon Man was explained, the question is raised... How does an MTV Moon man end up in Sanford, Florida? Well to answer that question time one must go back in time to 2004. The big MTV Moon Man first appeared at the 2004 MTV Video Music Awards in Miami at the American Airlines Arena as Chad Gallivanter explains in the article  “The Story Behind Sanford’s MTV Moonman”, Gallivanter claims this event was relevant because it was the first time the MTV award ceremony was held outside of New York City and Los Angeles. After the award ceremony the Moon Man was acquired by Acme Industrial Surplus and has been there for several years, creating an interesting sight for people driving by and admiring the huge figure.