In 1906, William Arnett, a former slave from Kentucky, was hired to rebuild the Indian log chapel that had previously resided on the campus of Notre Dame University since 1831 after a massive fire broke out in 1856 that destroyed most of the property. Arnett was drafted to build the replica because he was the only man skilled enough to properly use a broad ax which was the tool used to construct the original cabin built by Reverend Stephen Badin upon his arrival from France during his mission at St. Mary's Lake. It is known as the first chapel to ever be built on the campus. Although the cabin was home to several missionaries throughout its' early years, today it is more commonly used as a place for University religious services, weddings, baptisms, and prayer services for students attending Notre Dame.

Father Sorin and his brothers arrived at the Log Chapel during what they described as "the worst winter." They claimed that the snow was completely covering the cabin making it almost impossible to see. 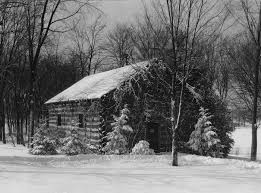 The Log Chapel is a favorite among students for Mass because of the secluded location. 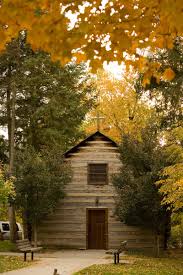 Although the Chapel is a small space, many students and faculty gather inside each morning to hold Mass and other religious ceremonies. 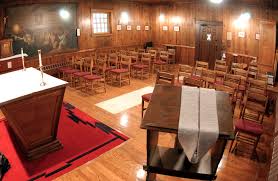 Wedding ceremonies in the Chapel are considered very popular and are held regularly throughout the year. 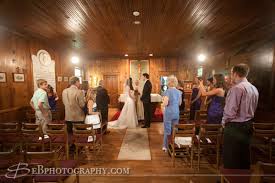 The beginning of the log chapel dates back to 1685 when French Jesuit Missionaries were traveling through northern Indiana. At this time France was sending over priests to attempt to convert the American Indians to their religious beliefs to make them more civilized. The first mission post was established along the St. Joseph River which was located south of the present-day city of Niles, Michigan. This mission post remained temporary and was eventually abandoned, however, until a few years later when Father Claude Allouez decided to make his journey to America after the previous missionaries had failed their tasks. Immediately Father Allouez became respected among the Indian tribes who lived on this land. The Indians helped Allouez become comfortable with the land and protected him, and in return, he held religious studies for them each evening. The mission post eventually became permanent and was known as the St. Joseph Mission. However, the post was abandoned once again after the British defeated the French in the French and Indian War.

After the mission site was abandoned, the Indians that lived around the lakes took over the land once again and claimed it as their own, establishing encampments until the arrival of Reverend Stephen Badin in 1830. Although Father Allouez died in 1689, the French stopped sending missionaries due to the conflicts that were occurring in America. After the War of 1812, Chief Leopold Pokagon, a leader of the Potawatomi tribe, traveled to Detroit to request that priests be sent back to the natives. It was considered tradition to send a missionary to America as part of the Holy Cross Congregation Mission, so Badin was next on the list when the time came to start sending missionaries again. When Badin did arrive, however, he decided to move the St. Joseph mission to the new center that had been formed between northern Indiana and Southern Michigan. He ended up purchasing the land on St. Mary's Lake and named the site St. Marie des lacs. Badin spent hours each day spending time with the Indians and often shared meals with them or stayed the night in their huts, but his main goal was to teach them about the saving message of God. After many years of missionary work, he decided to change the name of his mission site to Notre Dame du lac, to honor the Cathedral located back home in France. Soon after, he became the first priest ordained in the United States and served for sixty years.

On March 1, 1837, a meeting was held in Le Mans, France, among several priests who were teaching in schools around the area and were trying to decide who to send to America next. The leader of the group, Father Dujarie, was in terrible health and was not able to choose. He ended up signing over his role to Reverend Basil Moreau who ultimately decided to send Father Sorin and his seven brothers to America. On November 26, 1842, Sorin and his brothers reached the mission site that had once belonged to Reverend Badin, who was now dead and found it covered in snow. Before stepping foot in the chapel, they prayed to God for allowing them to arrive safely and for helping them find such a beautiful sight among them. Just as Badin had done, Sorin established a healthy relationship with the Indians which allowed him and his brothers to thrive tremendously in their new home. Eventually, they decided that it was not just enough to teach the natives, but that there should be an institution built to teach the younger population surrounding the area as well. It was in the wilderness that Reverend Sorin and his seven brothers established the University of Notre Dame. Sorin claimed that the idea to build the University came to him after a morning of service with the Indians. As he was looking out onto the lake he decided that such a beautiful place should be "secured for God." The cabin that had been the home of Reverend Badin was left respectfully by Sorin on the campus as a sign of good faith and a thank you to God for allowing the missionaries to be prosperous and do good deeds in America.

From 1987 to 1992 the Sacred Heart Church was renovated on campus. At the same time, it was decided that funds were to be given to the University to renovate the log chapel. Along with this decision, University President Father Hesburgh decided that it would be appropriate to move the body of Reverend Stephen Badin from the basement crypt in Sacred Heart Church to the cabin. His body remains there today, along with a marker on the wall discussing his significance. Today, the chapel is known as a place where Mass services are held for students and faculty of the University. Mass occurs Monday through Saturday starting at 8:00 AM and is considered a time to reflect not only on religion but the history of the University and the role religion played at the beginning of its' establishment as well. While there are other locations on campus to hold Mass, the log cabin is a favorite among the students because of the privacy that it provides. It is also a popular place for weddings which often leads to a long waitlist for those choosing to have their ceremony on campus. It is required that the bride or groom must be a Catholic and either a current student, alum, or Sacred Heart Parish member. The ceremony is 90 minutes long with a full Catholic Mass and follows the same procedures as a ceremony at the Basilica, another popular place on campus.