The triangle of hills between the towns of Jumbo and Grassy Creek in Webster County, West Virginia is home to the largest cluster of reported sightings of the “Blue Devil.” These sightings, which occurred in the winter of 1939-1940, described a bluish, doglike creature larger than a pony that prowled the area late at night and emitted a ghostly howl. According to many in Webster County, the animal was responsible for the deaths of a growing number of livestock over the period it stalked the land. Eventually the creature began making appearances in neighboring Randolph County, where residents joined the Valley Head Rod and Gun Club in offering a reward for its death totaling $400 (over $7200 today). Anyone interested in trying to catch a glimpse of the “Blue Devil” today may do so by traveling down scenic Grassy Creek Road in Webster County between Jumbo and Grassy Creek. 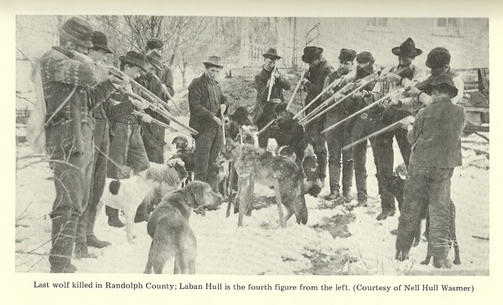 West Virginia Midland Railroad along Grassy Creek in the area of Diana, 1908. 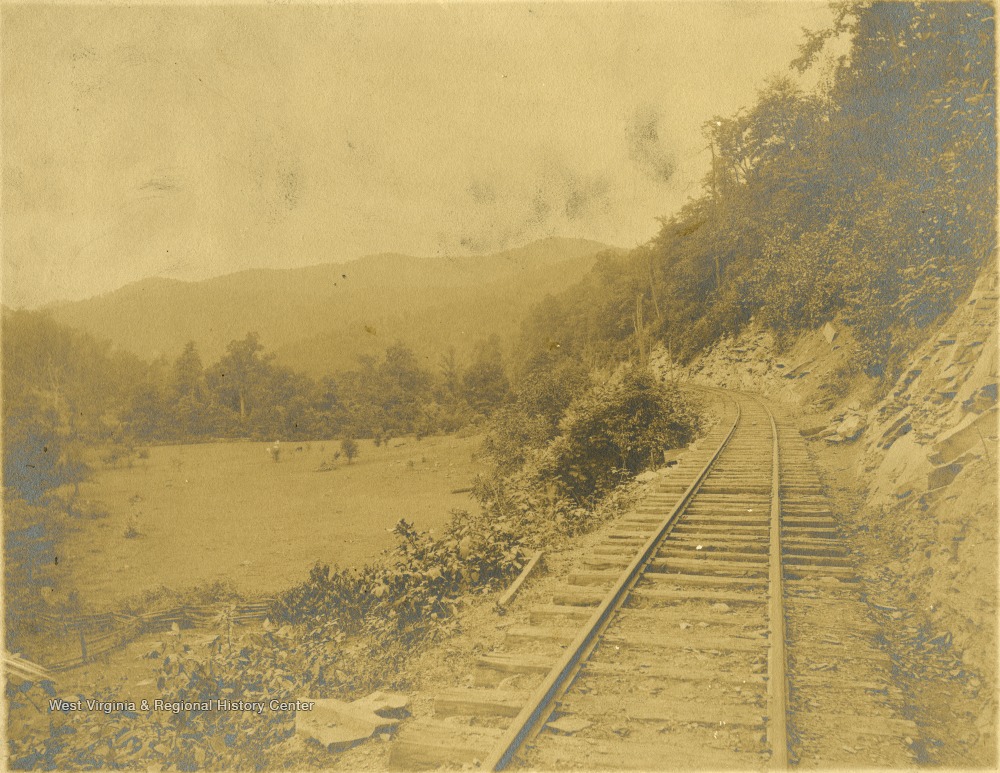 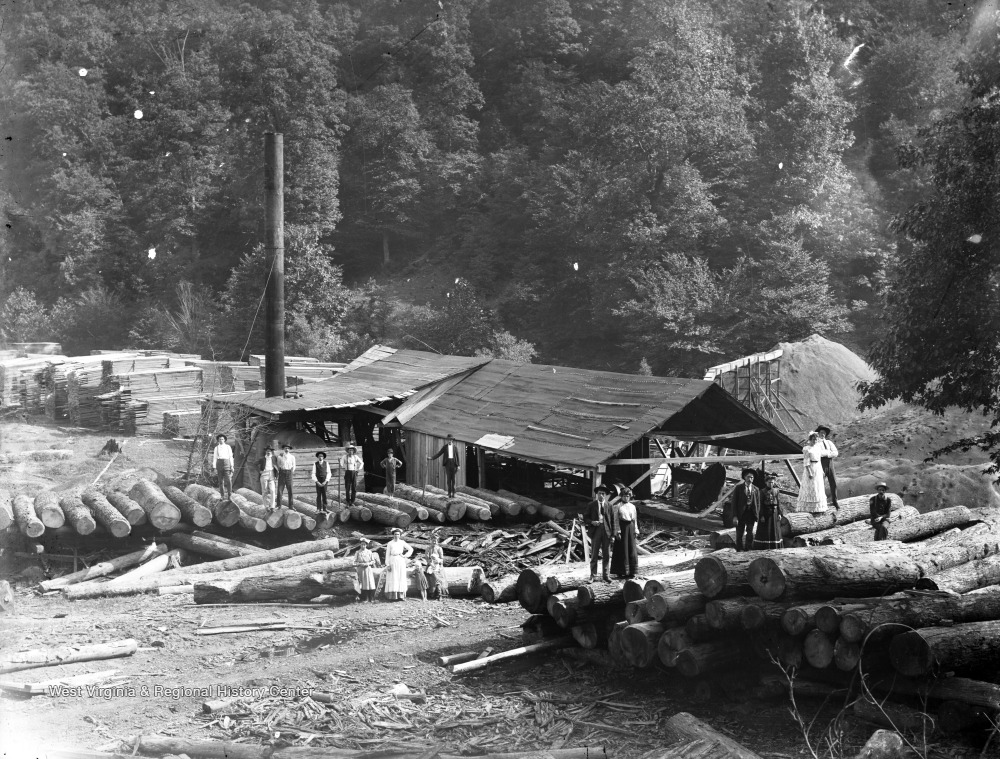 Like many West Virginia counties, Webster County saw a dramatic increase in industrial growth in the early twentieth century. Prior to that time lack of railroad access kept entrepreneurs from accessing and gathering the vast untapped natural resources of lumber and coal closer to the heart of the state. With the arrival of the Baltimore and Ohio Railroad and West Virginia Midland Railroad in the 1890s and early 1900s respectively, however, that began to change. Many of the forests in the Webster County area were “old growth” forests, meaning they had been largely undisturbed for well over a century, making them an ideal target for lumber companies. As a result, one of the county’s largest and fastest growing industries in the period was the timber industry and many of the county’s residents made their livelihoods harvesting local lumber. Within a few decades, however, overharvesting led to the industry’s collapse and many area residents were left unemployed. As with many cases of cryptid sightings economic insecurity fueled individual uncertainties and overactive imaginations, and the “Blue Devil” was born.

One of the first reported sightings of the “Blue Devil” was by Jumbo resident John Clevenger, a former lumber company employee and then farmer, who claimed in December of 1939 that his much-valued hunting dog had been attacked and killed by the beast. Another farmer, Ernest Cogar, reported that his livestock had been spooked for several nights and some wild animal had attacked and killed one of his cattle and a sheep. Mrs. V.S. Cunlip, meanwhile, reported hearing a “wild, inhuman scream” outside her home in Diana a few miles from Jumbo and H.A. Anderson heard something in Hacker Valley that “sounded like a panther.”[1] These reports quickly attracted outside attention, with hunters arriving from as close as the county seat of Webster Springs and Buckhannon in neighboring Upshur County and as far away as the state capital of Charleston and New York City. None of these hunters had any luck finding the beast that allegedly stalked the hills of Webster County, though the ones from New York City apparently had their hunting dogs on the trail of something but were forced to cut the chase short when their hounds refused to proceed any further.

Newspapers throughout the state, particularly in the state capital of Charleston, reported on the rising panic in the Webster County area with considerable amusement. When the sightings spread to Randolph County in January of 1940, the Charleston Gazette reprinted a story from the Elkins Inter-Mountain calling the beast a “varmint” and wishing it might represent proof positive that panthers still stalked the West Virginia heartlands.[2] Others particularly locals in Webster and Randolph County, however, were less cynical, and many took part in the growing search for the whatever was killing their livestock. Several claimed to have killed the beast, some seeking to collect the reward offered by the Valley Head Rod and Gun Club. The first, Glen Fisher of Bill Fisher Hollow, reported before the reward was offered that he had shot and killed the animal in December of 1939 but its body had vanished before he could inspect it in the morning. Another, coal miner Elmer Corley, killed something that Webster County game protector C.T. Whittaker characterized as not a coyote, but resembling one. After collecting the reward Corley assured area residents that the “Blue Devil” was dead, and no further reports were issued regarding the beast to belie his claim.

The following year, The Webster Republican published a story detailing a similar county-wide hunt four decades earlier. In 1897, the residents of Webster County had participated in the search for what the paper claimed was the last known gray wolf in West Virginia. On one night in January of 1895, it recounted, the wolf had killed twenty-seven lambs belonging to Jacob Hamrick in Randolph County. Shortly thereafter, the county courts of Randolph and Webster had offered a $100 reward (a little over $3000 today). Then, on New Years’ Eve, 1897, the wolf had killed five more sheep at John Hamrick’s farm near Whitaker’s Falls. Banding together, Hamrick and his neighbors set off a hunt for the animal in two feet of snow, stalking it over the course of several days before they finally brought it down. Publishing this account as it did just a short while after the “Blue Devil” sightings ended in 1940, The Webster Republican no doubt hoped its readers would come to the same conclusion it had: that the “Devil” was just one more wild beast like the last gray wolf in West Virginia, nothing supernatural to it. While the Republican might have dismissed the “Devil,” other haven’t and anyone interested in sighting it may hunt for it between on the road between Jumbo and Grassy Creek.