At this location Grafton Sentinel reporter Robert Cockrell made one of the first – and by far the best known – sightings of the alleged West Virginia cryptid known as the “Grafton Monster” or “Beast of Grafton.” Cockrell made the sighting on June 16, 1964 while driving home from work after 11 PM on Riverside Drive along the Tygart River, describing what he encountered as seven to nine feet tall, four feet wide, and white with seal-like skin. Though Cockrell’s editors at the Sentinel immediately dismissed reports of a “monster” in Grafton, the town’s residents quickly began a massive search of the area over the following weeks and the legend of a local “beast” soon spread across the state. Today the Grafton Monster is one of the most well-known West Virginia cryptids and cryptozoologists and enthusiasts frequent the town every year in their search for evidence of the beast’s existence. The town placed a sign at the site in 2018 to commemorate Cockrell’s 1964 sighting, but a theft of the sign shortly thereafter motivated its relocation to the downtown area upon its recovery.

Grafton Monster Sign erected at site of Cockrell's sighting in 1964. 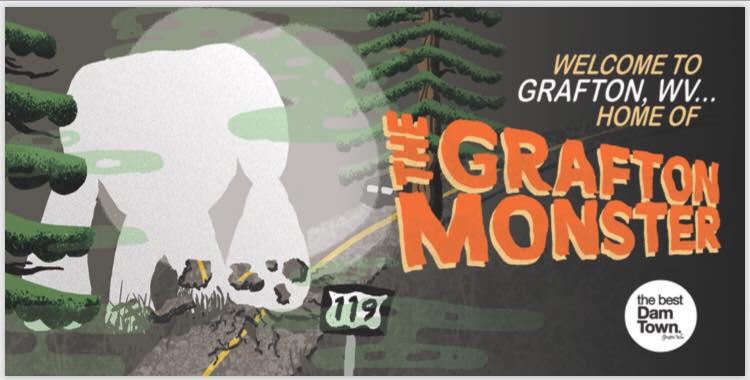 Grafton in 1960, four years before the Grafton Monster sightings began. 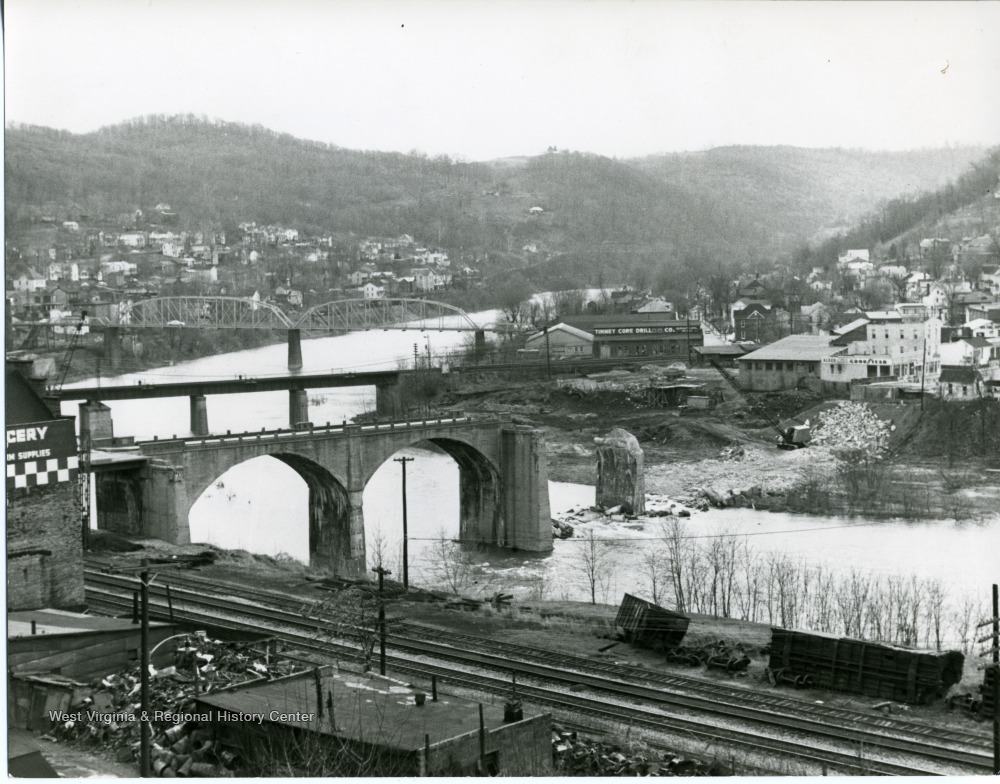 Although Grafton experienced significant economic and demographic growth after the American Civil War as a result of business brought to the town by the Baltimore and Ohio Railroad and local factories, the post-World War II period produced considerably different results. Indeed, as the twentieth century progressed, the same factors that had resulted in the community’s rapid expansion in the late nineteenth century complicated further development. Smoke from the extensive railroad and manufacturing activities in and around the town hindered its residents’ ability to live and conduct business there and later efforts to redirect railway traffic interfered with local manufacturing. The economic situation worsened further with the subsequent closure of the Carr China Plant and Hazel Atlas Glass Plant in the 1950s, leaving hundreds in Grafton without work. In the latter part of the decade, however, the community rallied to attract new industry to the town, and endeavor that was not only successful but earned Grafton the National Civic League’s All-America City Award in 1962.

In was within this context that the first sightings of what became known as the Grafton Monster were made. These sightings were the latest in a number of similar occurrences throughout the state, sightings that seem to have occurred with more frequency in the areas most impacted by West Virginia’s gradual deindustrialization in the second half of the twentieth century. This process, combined with the increasingly conspiratorial political atmosphere of Cold War America, made the Mountain State ripe for cryptid sightings in the 1950s and ‘60s. In 1952 local residents in Braxton County, West Virginia reported the first sighting of what became known as the Flatwoods Monster, while the citizens of Point Pleasant described their initial alleged encounters with the Mothman in 1966. Grafton’s own monster sighting is sandwiched firmly between the two.

The most famous of these sightings occurred after Robert Cockrell got off work at the Grafton Sentinel at 11 PM on June 16, 1964 and began his journey home down what is now Yates Avenue along the western banks of the Tygart River. Rounding a curve in the road, Cockrell’s headlights caught what the reporter described as a “huge white obstruction” with slick, white skin and no head.[1] Terrified by what he had seen Cockrell raced home, calling his friends Jerry Morse and Jim Mouser to ask them to accompany him in a return to the site for further investigation. Though they found nothing upon arriving there the grass where Cockrell had seen the “obstruction” standing had been trampled, and they heard a low whistling sound that seemed to follow them as they continued their search at the location. The next day Cockrell said nothing to his coworkers at the Sentinel, but upon hearing of other reporting sightings that matched his own he chose to speak up. His editors considerably censored the article he wrote on the subject, however, which appeared on June 18.

That article, titled “Teen-Age Monster Hunting Parties Latest Activity on Grafton Scene,” described an encounter with a group of Grafton youths searching for the monster on Riverside Drive with considerable skepticism. The “description of the alleged Grafton ‘monster’ sounds suspiciously like that of the recent reports of a “monster” in Michigan,” the article read, “except that Grafton’s seems to be a bit bigger in every respect.”[2] “One youth suggested that it might be an escaped Polar bear,” it further reported, “but offered no suggestions as to where such an animal could have escaped.”[3] The following day, the paper openly poked fun at the growing search for a monster in Grafton in an article entitled “Monster Result of Spring Fever, Wild Imagination.” “At approximately 10 p.m., it was reported that cars were almost bumper-to-bumper along the river drive,” it noted, and so “many teenagers and adults were roaming that section of the city” that “Grafton’s alleged ‘monster’ . . . “couldn’t have shown up in the Riverside drive area if it wanted to.”[4] A “combination of spring fever, lack of area recreation facilities, and recent publicity given a Michigan town which claims to have a “monster” which followed people are believed to have laid the basis for the wildly imaginative story about a Grafton ‘monster,’” it claimed, but a “routine check by The Sentinel showed that the “monster” may have resulted from the fact that an individual pushing a handcart loaded high with boxes, walked along Riverside drive on Tuesday night.”[5] For the Sentinel, at least, the matter had been settled. For everyone else, however, the legend of the Grafton Monster was just beginning.

Indeed, since the original sightings in 1964 the lore surrounding the “Grafton Monster” has spread across West Virginia and the nation. Gray Barker, the Clarksburg researcher who popularized tales of the Mothman, believed that the Grafton Monster was a lab animal left on Earth by extraterrestrials to test the planet’s livability, while others have suggested that it was an interdimensional traveler. Regardless, the Grafton Monster has brought considerable attention to its home town, most notably in recent memory as one of the West Virginia cryptids that appeared in Bethesda Studio’s Fallout 76. To capitalize on this attention, the town placed a sign commemorating Cockrell’s sighting at the location of his encounter along Riverside Drive. The sign was stolen by a West Virginia University student shortly thereafter, however, but just as quickly recovered. When it was, it was moved to a new location on Main Street.