Established circa 1905 by Louis Kauffeld, Sr., the Star Glass Company was once one of the most prominent manufacturing concerns in Monongalia County’s industrial district between the Monongahela River and the Baltimore and Ohio Railroad. Kauffeld was well known in the glass industry of the period, receiving national attention shortly before founding Star Glass for his claim that he had developed a formula for malleable glassware. After he brought his manufacturing concern to the Morgantown area Kauffeld began working to provide housing near the factory for his workers, efforts that culminated with the incorporation of Star City (named after Kauffeld’s company at his suggestion). A few years later Star City became one of only a handful of communities nationwide to elect a majority Socialist town council, a party that was supported heavily by the workers of Star Glass. The Star Glass Company suffered from a destructive fire on multiple occasions and did not recover following a 1921 conflagration. However, the site is still home to the Davis-Lynch Glass Company and is visible to the public from the Caperton Trail.

The Star Glass Company the year after its construction in 1905.

Undated photo of Star City from across the Monongahela River, with the Star Glass works to the left. 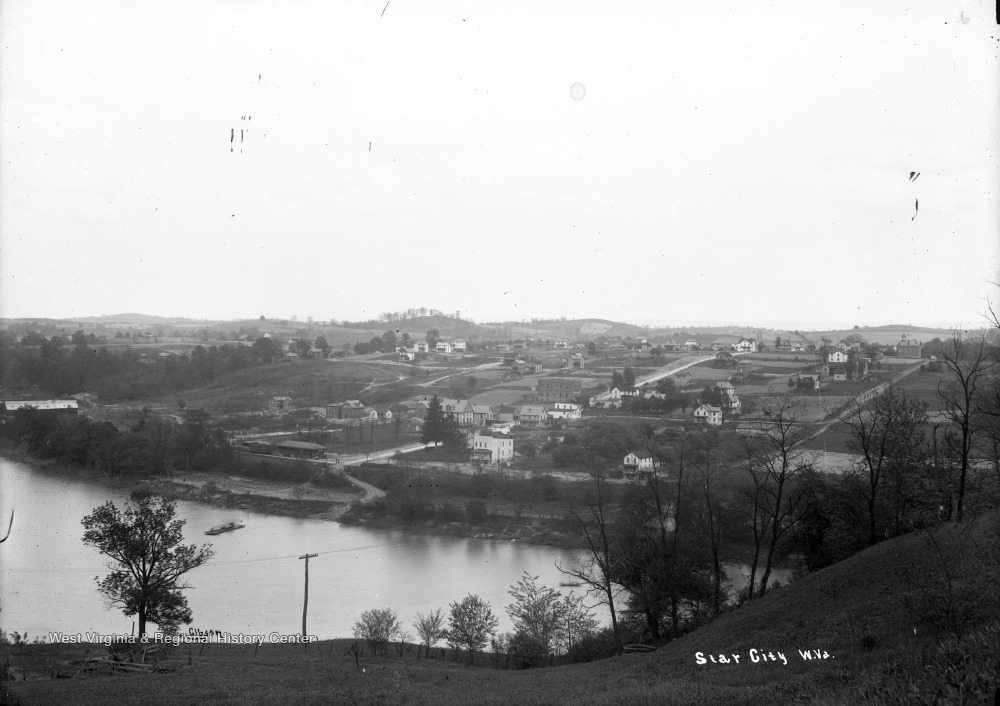 As with other industries, glass-making arrived in West Virginia as a result of a confluence of several processes. The first, statehood in 1863, opened the region to industrialists who had earlier been prevented from investing more heavily there by Virginia’s general failure to more heavily develop the western part of the commonwealth prior to the American Civil War. The second, the ingress of railroads to the new state, allowed manufacturers the means to transport goods and supplies to and from their factories. Next, the rise of the sand glass mining in Berkeley Springs, West Virginia in the 1890s, provided the raw material for glass makers interested in locating their factories in the Mountain State. Finally, the increase in natural gas production in Ohio and Pennsylvania gave those manufacturers the fuel they needed for glass melting.

By the time Louis Kauffeld set up shop in what was then known as the town of Randall, West Virginia, the glass industry had been well established in the Morgantown area for several years. The first company to arrive in the area was the Seneca Glass Company, which relocated from Fostoria, Ohio in 1896. By the time Star Glass opened for business in 1905 eleven other companies had followed Seneca to Morgantown, among them the Morgantown Glass Works, Mississippi Glass Company, and the Pressed Prism Plate Glass Company. Kauffeld was already well known in this industry after having demonstrated for reporters in 1902 his discovery of what he claimed was malleable glass. This glass, which Kauffeld had been using to make chimneys and globes to cover oil lamps for several years, could be boiled without cracking and used to hammer nails into wood (a feat the glass maker reportedly demonstrated to astonished onlookers to prove his claim). Though he refused to reveal his recipe for the glass Kauffeld did state that it used neither lead nor lime, the two most common ingredients in glass making at the time.

Kauffeld put this recipe to use once more in his new factory north of Morgantown just a few years later. Factory workers used what was known as the offhand process to manufacture the chimneys and globes at Star Glass, a process that required a particularly high level of skill. In this process, a gatherer, blower, and crimper work together to gather molten glass on the end of a pipe, blow through the pipe and swing the glass back and forth to achieve the requisite thinness and shape, and then (after the glass has cooled) reheat the end and crimp it to smooth the edges. Lamp chimneys required further skill to vary the thickness of the glass from one end to the other so that the areas closest to the lamp flame were better able to withstand the heat and those farther away allowed more light to shine through. As a result, the workforce at Star Glass and other lamp chimney factories like it were more highly skilled compared to those in industries where owners were able to shift more of the labor onto machines. The resistance to mechanization in the glass chimney industry was also complemented the shift nationwide toward electric light. With their profits decreasing dramatically in the face of that shift, many lamp chimney manufacturers like Kauffeld could not afford to buy the machines necessary for mechanization in their factories and so had to continue relying on skilled labor.

Because Kauffeld’s workers were so highly skilled, many of them supported the Socialist Party at its height in the early twentieth century. Socialists opposed mechanization in factories, which they argued allowed factory owners to make their employees expendable. If the majority of the labor in a factory was done by machines and the workers that serviced those machines needed less training, those workers could be paid less and more easily be fired. Realizing this, Kauffeld’s employees supported political candidates who would do their best to resist the mechanization of local plants. Since many of those employees lived in the immediate vicinity of their factory, a town that they named Star City after the company for which they worked in 1906 at their employer’s suggestion, the council that governed that town was made up of a Socialist majority. As that party’s popularity waned nationwide with the spread of “red scares” across the United States, however, its hold over Star City weakened as well. Within a few years Socialist candidates in the area had begun running on independent “citizens” tickets, a tactic that their compatriots elsewhere used frequently as well.

The Star Glass Company wasn’t around to see the party’s ultimate demise in the area, however. By then it had succumbed to a 1921 fire, the third such occurrence in the company’s history. With large vats of molten glass an ever-present necessity, glass-making was dangerous work. In November of 1906, the first fire destroyed the factory only a year after it had first opened for business. A little over ten years later, on December 11, 1917, another such fire destroyed the factory once more. The final fire, on July 16, 1921, caused $150,000 in damage ($2.1 million today) and nearly cost Kauffeld’s son Louis Kauffeld, Jr. his life (an incident that may have influenced his decision to help found the Star City Volunteer Fire Department the following decade). The next factory opened by a Kauffeld was the Kauffeld Illuminating Company, this time under the ownership of Louis, Jr., who followed his father into the glass-making business.