Opened in 1924, the Atlanta Biltmore Hotel and Biltmore Apartments was described as the "city's point of contact with the world beyond its own borders." It was built around the same time that grand, modern hotels were popping up around the country. William Candler, son of Coca-Cola magnate Asa Candler, was the local financier behind the Biltmore project, buying the land for the hotel in 1921. It was built in conjunction with Holland Ball Judkins and John McEntee Bowman of the New York-based Biltmore hotel chain, named after the Vanderbilt family estate in North Carolina. 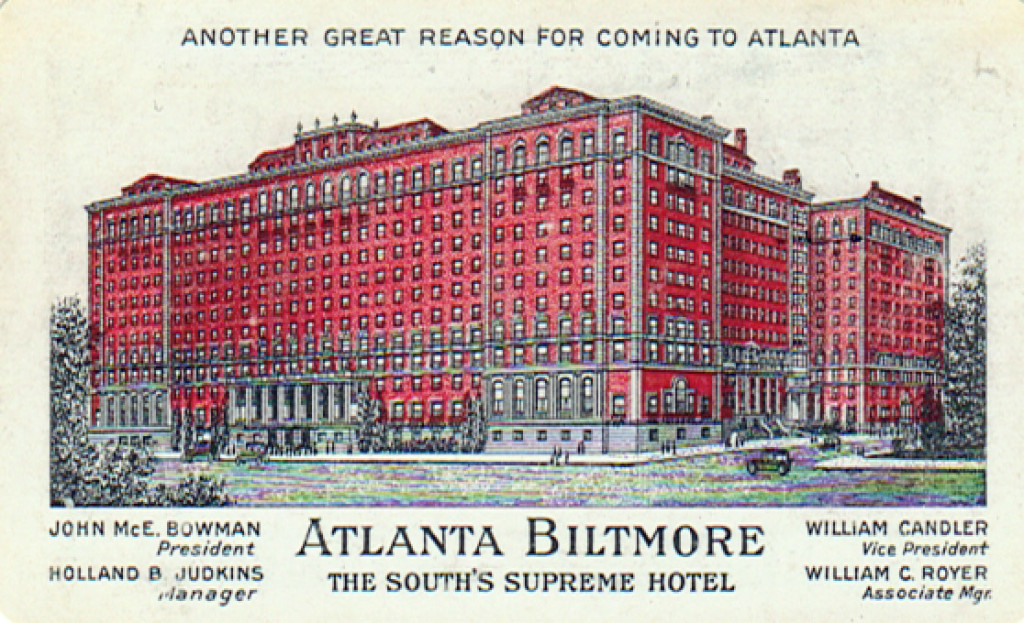 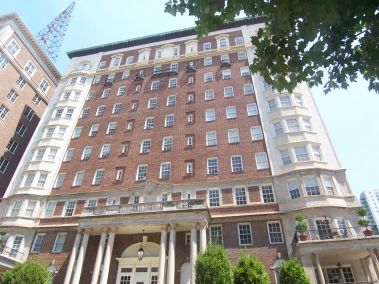 A type of "apartment hotel" popular during the 1920s, the Atlanta Biltmore Hotel and Biltmore Apartments opened in 1924 and was described as the "city's point of contact with the world beyond its own borders." The 11-story hotel and adjacent 10-story apartment building are an excellent example of the grand, modern hotels built across the country during this era.
The success of these monumental hotels was fostered by the combination of improved transportation, mass production of inexpensive Ford motor cars, financial speculation based on an attitude of unbounded prosperity, and newly enfranchised middle-class vacationers.
William Candler, son of Coca-Cola magnate Asa Candler, was the local financier behind the Biltmore project, purchasing the land for the hotel in 1921 and incorporating the Atlanta Biltmore Hotel Company in conjunction with Holland Ball Judkins and John McEntee Bowman of the New York-based Biltmore hotel chain. Bowman developed several Biltmore Hotels through the country during this period, all bearing the Biltmore name which was said to be drawn from the Vanderbilt family estate of the same name in North Carolina. The Atlanta Biltmore was designed by the New York firm of Schultze and Weaver, also responsible for the Biltmore hotels in Los Angeles and Havana.

The Atlanta Biltmore was located in an upper-class residential neighborhood, close to downtown but separated from the business district. Both its location and restrained exterior design, with Neo-Georgian detailing, was intended to appeal to the upper-class and was thought to reflect the refined grace of the New South. The six million dollar hotel opened with great fanfare, and a train was chartered from New York City to bring prominent Northern hotel men to Atlanta for the festivities. A dinner-dance at the hotel that evening was broadcast nationally over the radio, and during the opening weekend, 1,000 cars made the circular sweep through the hotel's gardens and terrace drive.
According to one reporter, Biltmore hotels, like that in Atlanta, provided "the background for a ceaseless pageant of human life, and even of human romance, and architecturally it is at its best when it dramatizes the people beneath its roof when it makes the life and spirit. within its walls transcend the routine and ordinary everyday trend of .existence."

The Atlanta Biltmore, once known as the South's signature hotel, staged galas, tea dances, debutante balls, and recitals by visiting Metropolitan Opera stars. It served celebrities such as Franklin D. Roosevelt, Dwight D. Eisenhower, Mary Pickford, Bette Davis, and Charles Lindbergh. The hotel was the initial home of the Atlanta Historical Society and the meeting place for many of the city's civic organizations.
For more than 30 years, WSB, the South's first radio station, broadcasted from its studios within the hotel and the radio tower on the hotel roof became a landmark on the city skyline. Facing increased competition from Atlanta's modern downtown hotels, the building was sold to a series of owners beginning in the 1960s who were unable to revitalize the business.
In 1997, a local real estate investment firm, The Novare Group, purchased the Biltmore property and renovated the hotel to offer a variety of uses. In the spring of 1999, the former Biltmore Hotel reopened for the first time in almost 20 years, and currently offers special event space for business and social functions.