The Nooherooka Monument commemorates the location of the final battle in the Tuscarora War in 1713. The Native American fort was besieged by colonists in the Eastern North Carolina region after an uprising by local tribes due to trade dispute, westward expansion, and alleged slave trade. The battle ended in the massacre of almost 1000 Native American men, women, and children. 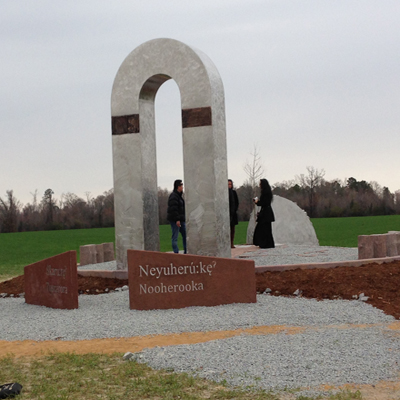 Placard near the Nooherooka monument on Rt. 58. 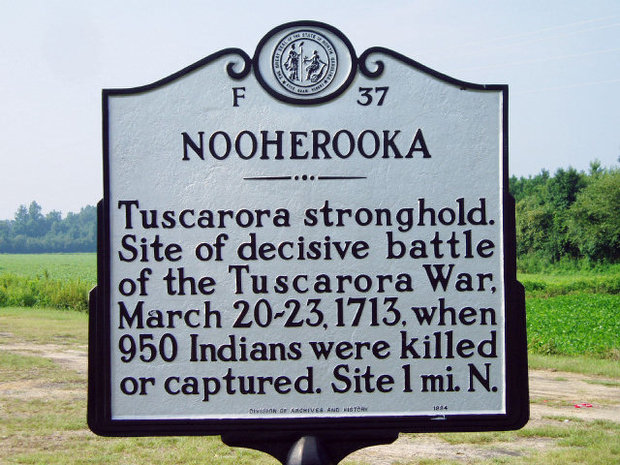 The Tuscarora were a powerful tribe that mainly lived in Eastern North Carolina on the Roanoke River. They spoke an Iroquoian-based dialect derived from the Native American tribes of the Great Lakes area. The Tuscarora had established their home in Eastern North Carolina after migrating from New York centuries before European colonists came to America.

In September of 1711, the Survey General of North Carolina John Lawson was captured and executed by Tuscarora tribal members because of a growing concern amongst themselves about the expansion of the colonists onto Tuscarora lands, growing trade disputes, and the kidnapping and enslavement of tribe members. Later than month, Chief Hancock led the Tuscarora against the colonists and killed 130 settlers who lived along the Pamlico, Neuse, and Trent River, which sparked outrage among survivors in the region.

Edward Hyde, governor of South Carolina, raised a militia of 600 settlers and 300 Native American allies to lead a raid against the Tuscarora. Over 300 of the Tuscarora are killed and about 100 are made prisoners, mostly women, who were then sold into slavery.

After a humongous invasion of their village by a force of 1000 colonists and Native American allies, Chief Hancock was captured by the settlers and executed. The Tuscarora, lacking effective leadership, began construction of the fort at Nooherooka. Colonel James Moore led a siege against the fort that lasted from March 1st until March 22nd, 1713. Approximately 170 Tuscarora died fighting, while an unknown number ranging in the hundreds died when the colonists set fire to the fort. The remaining 400 Tuscarora were sold into slavery in Southern Carolina.