Jones Hall was the first building constructed specifically for Youngstown State University. Jones Hall has not always been its name, it was originally known as the Youngstown Institute of Technology. Built on the location of the Wick family mansion the building was designed by local architect, Paul Boucherle and was completed in 1931.

Jones Hall as it looks now. 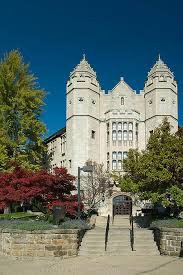 To understand the story of Jones Hall it is important to understand the story of Youngstown State University as a whole. Youngstown State University was originally known as Youngstown college and was established by the Y.M.C.A in 1908. The Y.M.C.A was pivotal at the time for the education of youth in America and the Youngstown College was their sixth biggest location at the time. The Y.M.C.A didn’t construct any new buildings for the college throughout the 1920’s despite the fact that the college was growing tremendously during this time period.

Jones Hall was constructed where the Wick family mansion once stood. The Wick family was one of the most prominent family’s in Youngstown’s history for instance Colonel Wick was a founding member of Youngstown Sheet and Tube. The Wick mansion was destroyed and in October of 1931 Jones Hall opened and had an opening enrollment of 1,132 students.

Jones Hall is now the location of various administrative offices for Youngstown State University. Such as the International Programs Office and Multicultural affairs and Payroll.