The Sphinx Tomb (1903), located on the campus of Dartmouth College, was designed by William M. Butterfield and reflects the Egyptian Revival architectural style. The windowless, concrete building serves as the home to the secret, all-male Sphinx society founded in 1885. Each year, 24 junior-class male students are selected by their senior class peers to join the organization; members do not reveal their place in the society until Commencement.

Photograph of the Sphinx at the campus of Dartmouth College in Hanover, New Hampshire. 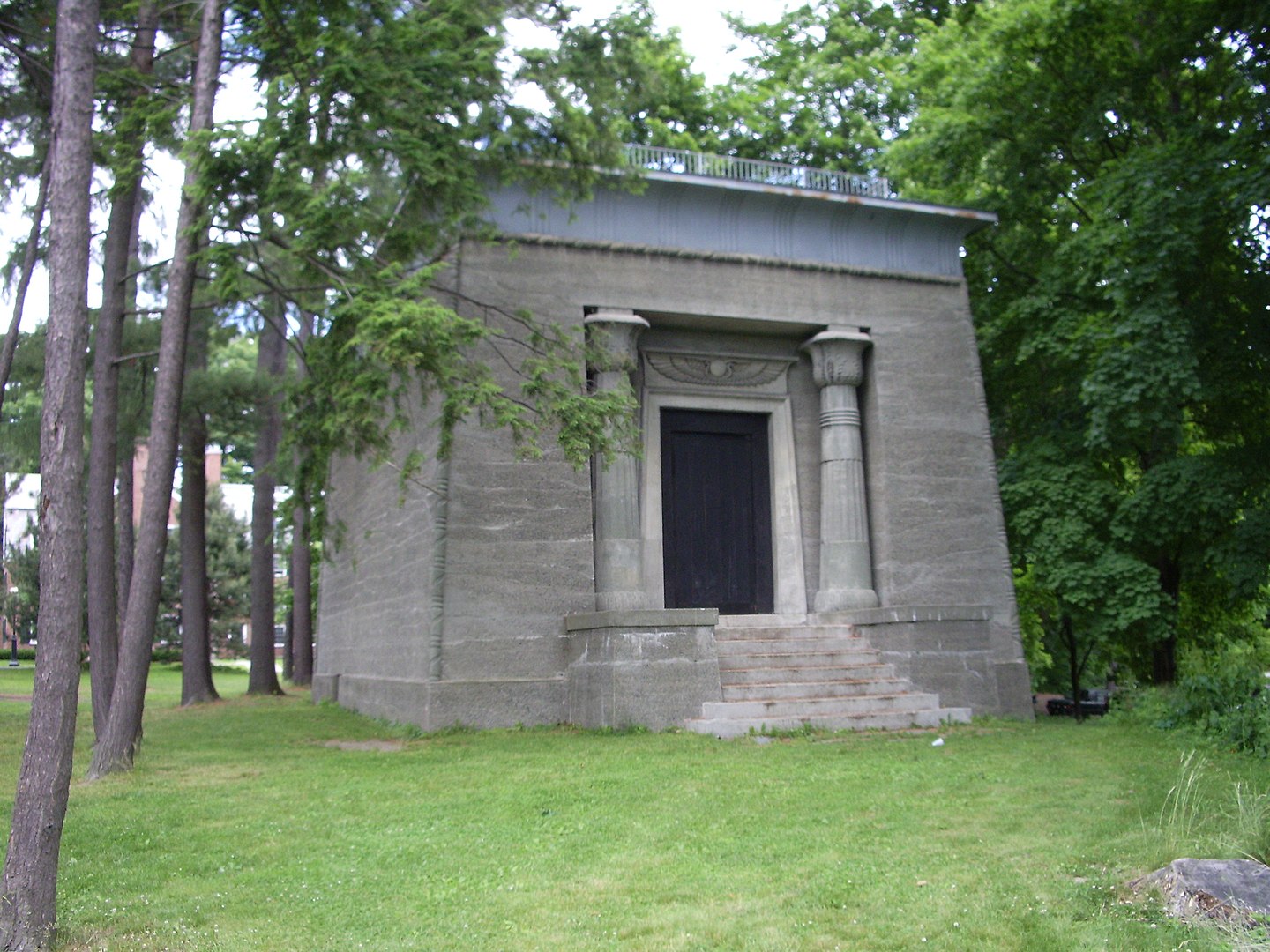 The Sphinx Society functions as one of several secret societies at Dartmouth, founded in 1885 by 14 male students (class of 1886). Its Sphinx Tomb ostensibly exists as the only non-secretive aspect of the organization. Manchester architect William M. Butterfield designed the building in the Egyptian Revival architectural style with construction finished in 1903.

Each year, during Dartmouth's annual Winter Carnival weekend, senior members of the Sphinx select twenty-four male students of the junior class to join the secret society in a process referred to as "tapping." The chosen members do not reveal their place in the society until Commencement when graduating members carry identifying canes. As well, the all-male organization does not disclose its purpose or mission, but many believe the members contribute to community-service needs.

Despite that believed purpose, the Sphinx got into trouble in 1989 when its members took part in a scavenger hunt that resulted in numerous thefts across campus. Stolen goods included paintings, photographs, mailboxes, and various items amounting to $12,000. The school offered to resolve the matter upon the goods being returned -- no questions asked. But, while most goods were returned within 24 hours, not everything found its way back to its rightful owner. As a result, the school conducted an investigation and discovered the Sphinx scavenger hunt led to the thefts. Thus, Dartmouth suspended several students and put others on probation while also refusing to recognize the Sphinx for one year. The school also fined the student organization $3,000 plus the cost of damages to the stolen goods.

Despite that black eye, the group remains a part of Dartmouth life, as it has for more than 130 years. Its purpose and rituals remain clouded in mystery, but that is what appears to be much of its charm.

The Sphinx Tomb, though not a secret, is not easy to locate because it sits amidst large trees and between a fraternity house and dormitory on the Dartmouth College campus. The windowless, one-story poured concrete tomb served as headquarters to the Sphinx Society; the Sphinx Alumni Corporation owns the building. William Butterfield designed the building in the Egyptian Revival architectural style, a popular design around the turn of the century. Butterfield drew inspiration from The Temple of Dendur, which had been moved from Egypt to the United States during the 1960s. The Temple of Dendur grew into a popular exhibit at the Metropolitan Museum of Art in New York City.

A noteworthy component of the Sphinx Tomb involves its entrance facade comprised of two columns and a stairway topped by a symbolic winged disk. Some people question if the entrance has ever been used because the wooden door has no handle, and both the door and stairs show no sign of wear. In contrast, a second entrance found on the east side at the basement level appears to function as its main entry. Plans for a sizable addition in 1923 never materialized. Instead, in 1926, the society added a smaller rear addition. Six years later, in 1932, the organization rebuilt the interior after a fire started in the building's furnace and damaged the interior of the building.

Peisch, Will. "Secrets of the Sphinx Uncovered in a Bathroom Stall." Dartbeat: The Dartmouth's Daily Blog. thedartmouth.com. May 5, 2015. https://www.thedartmouth.com/blog/dartbeat/2015/05/secrets-of-the-sphinx-uncovered-in-a-bathroom-stall.