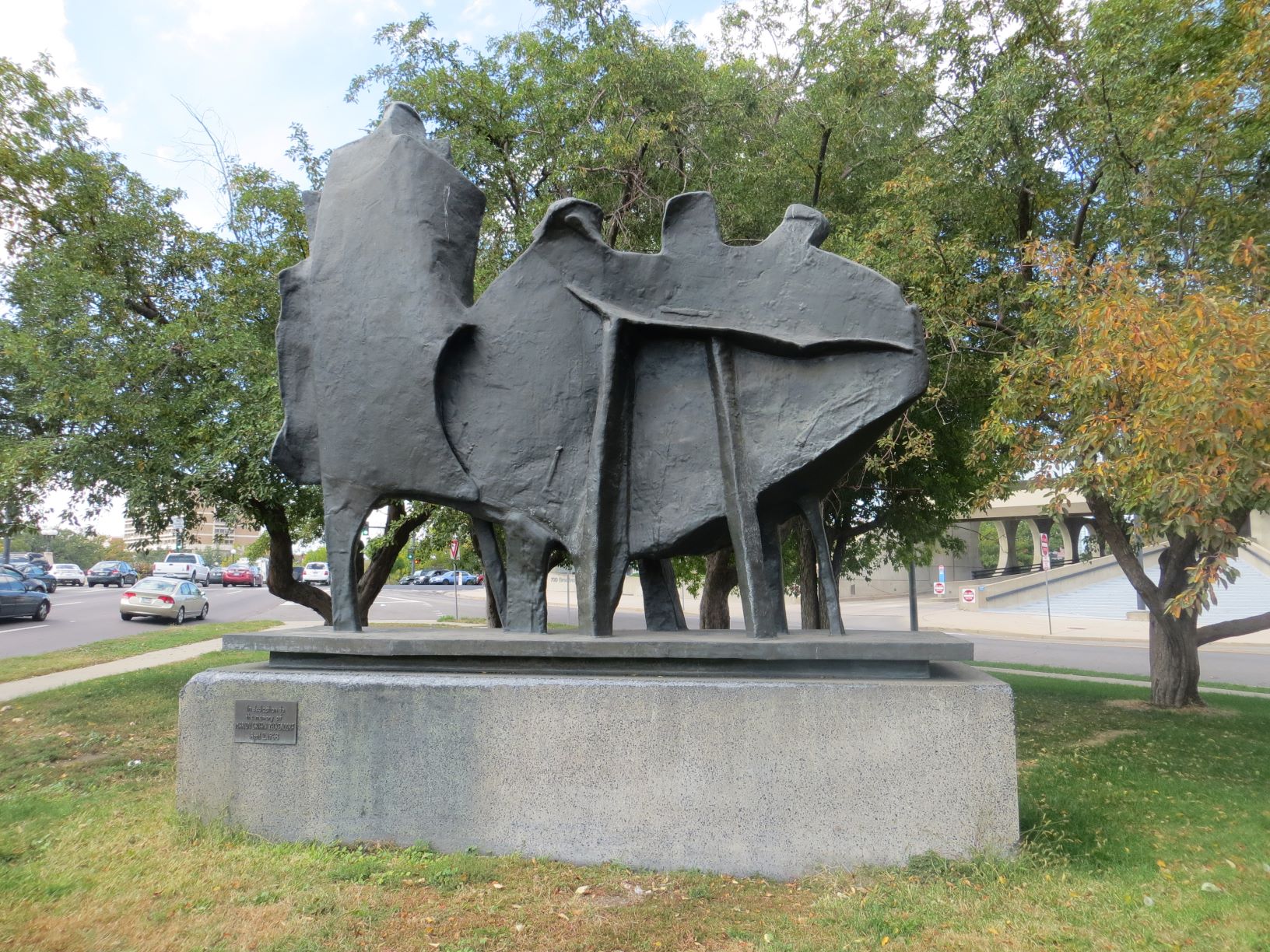 In the mid-1960s, Denver named this small triangular park after real estate developer William Zeckendorf. The honoree’s foundation offered a $5,000 prize for a sculpture for the park dedicated to Colorado pioneers and produced by a Colorado artist. The selection committee was not impressed by traditional designs for this new monument. Instead, they chose a design by a young local artist, Susan Pogzeba, who “refuse[d] to ascribe any particular meaning to” her abstract design. But she explained that “other people have tried to pin such meanings as ‘family’ on it.” The artist said that she “was just working with forms and this was the result.”1

Pogzeba’s forms echo the standing figures in Avard Fairbanks’ semicircular 1946 Pioneer Family Group on the North Dakota state capitol grounds in Bismarck. But Pogzeba’s abstract, flat shapes bore little resemblance to Fairbanks’ realist pioneer characters. That Pogzeba’s abstract figures also evoked the forms of the Rocky Mountains towering to the west of Denver may have increased the design’s appeal for the selection committee. The Minimalism of Pogzeba’s abstract metal forms appears to have made her entry stand out to the Zeckendorf monument’s selection committee, which awarded second prize to a series of engraved tablets, and third prize to a “stylized metal sculpture of tree forms.”2

Pogzeba’s design was far less warmly received by the general public. The Kenosha [Wisconsin] News printed a United Press International photo of its 1968 unveiling with three older women clad in wool coats and headscarves in the foreground with skeptical looks on their faces, under the title “’We don’t like it.’” Like those three women, most westerners still expected American pioneer monuments to embody traditional values rather than pioneering new artistic styles. Colorado residents rejected Denver’s fine arts establishment’s claim that Pogzeba’s abstract figures represented an Homage to the Pioneer. But the public’s objection appears to have been to the pioneer label that certain Denverites insisted on applying to Pogzeba’s design, more so than to the design itself. Indeed, it was widely enough appreciated to justify installing a fiberglass copy in Reverchon Park in Dallas in that same year under the more generic title of Family Group. There the copy remained until 1991, when it was destroyed by vandals. The original bronze work--displayed without its pioneer title--survived but gradually was forgotten as downtown Denver was redeveloped around it.