Growing out of a small company making steam boiler parts and stoves, the Marietta Manufacturing Company eventually built many ships for the Army and Navy during World War 2, the Korean War, and the Vietnam conflict, as well as many civilian craft that operated along the Ohio and Mississippi Rivers--perhaps totaling 800 vessels during its half-century of shipbuilding. Though originally founded in Ohio, the company relocated to Point Pleasant after a disastrous flood in 1913, remaining there until the facility's closure in 1984.

Marietta Manufacturing's primary facility on the banks of the Ohio River circa 1943. 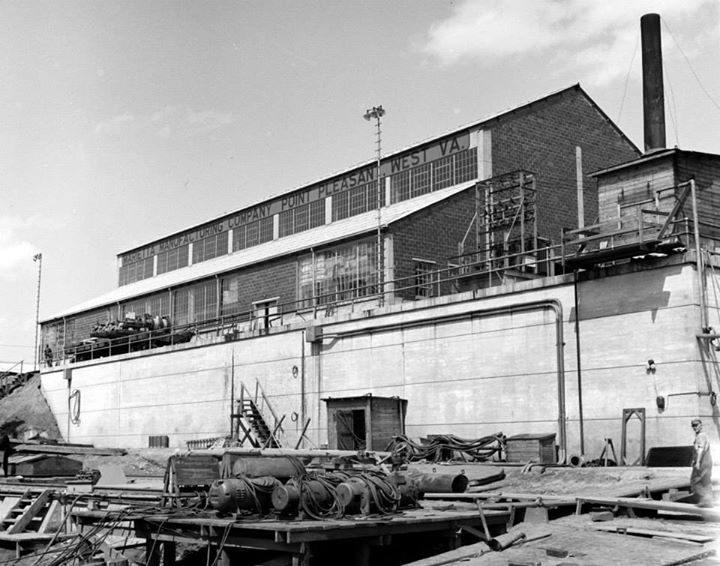 Fabrication of boat at Marietta Manufacturing during World War II. 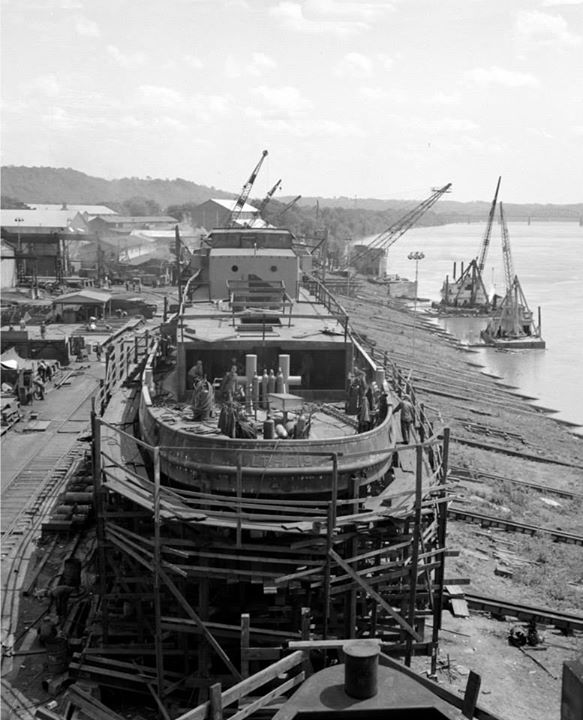 During World War II, U.S. Army LT boats were constructed high on the banks of the Ohio River and slid down into the water via the skids at right. (Library of Congress). 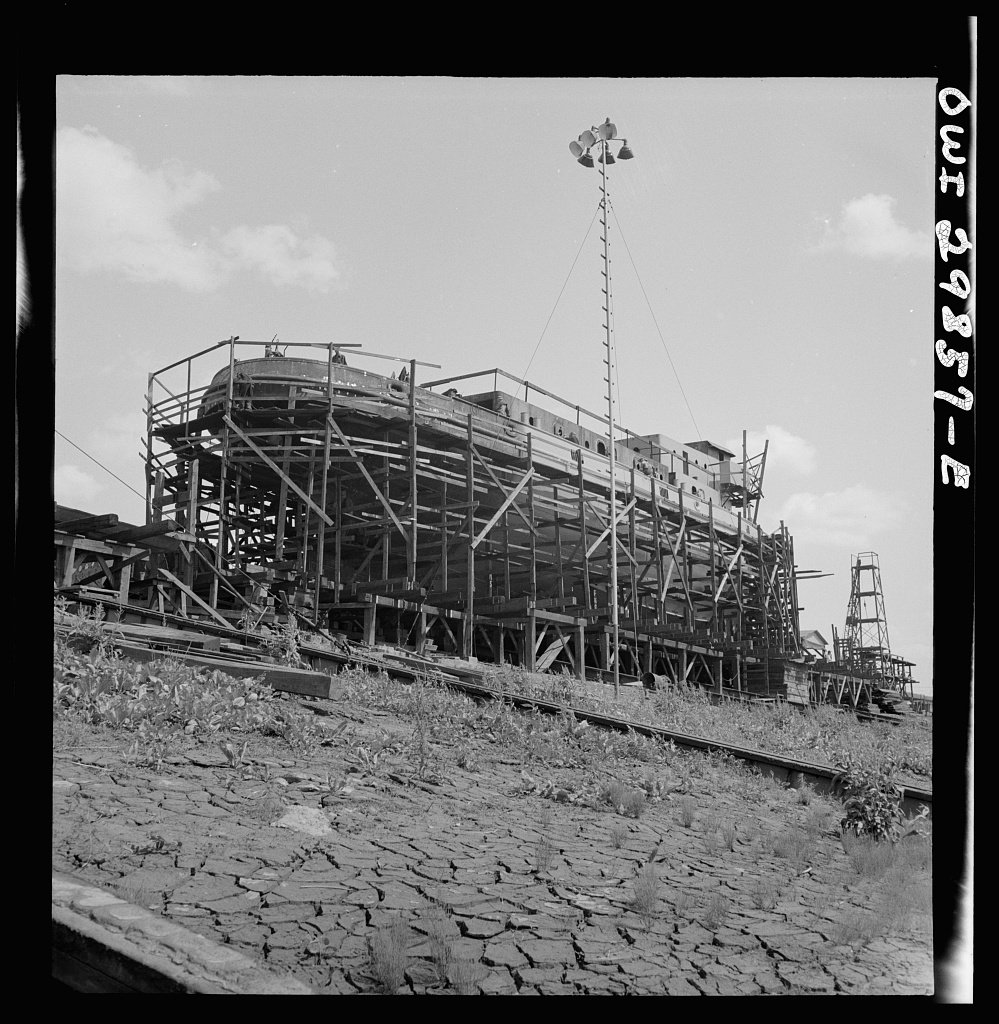 A view of the skids from the deck of a vessel under construction at Marietta. 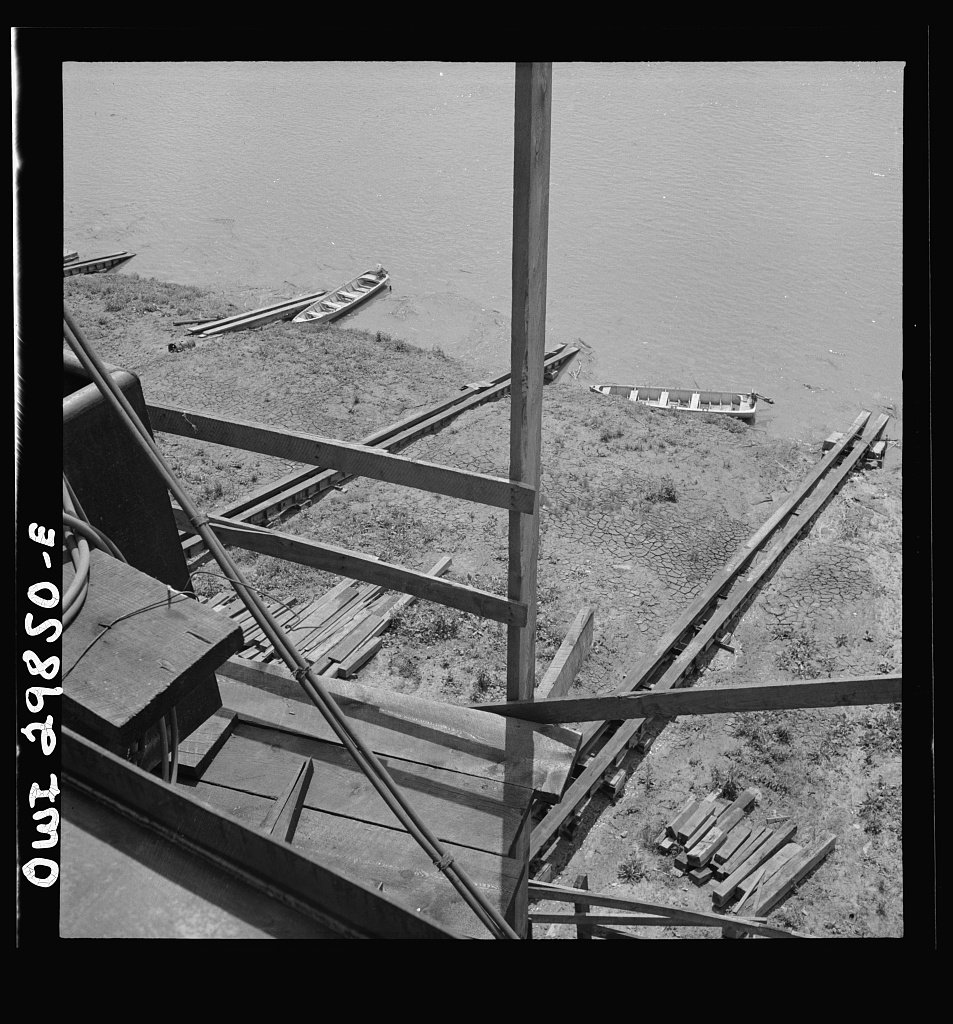 Workmen clamber over a U.S. Army boat (LT stands for "large tug") under construction at Marietta in 1943. Launched in August of that year, LT-218 was later sold to China in 1947. 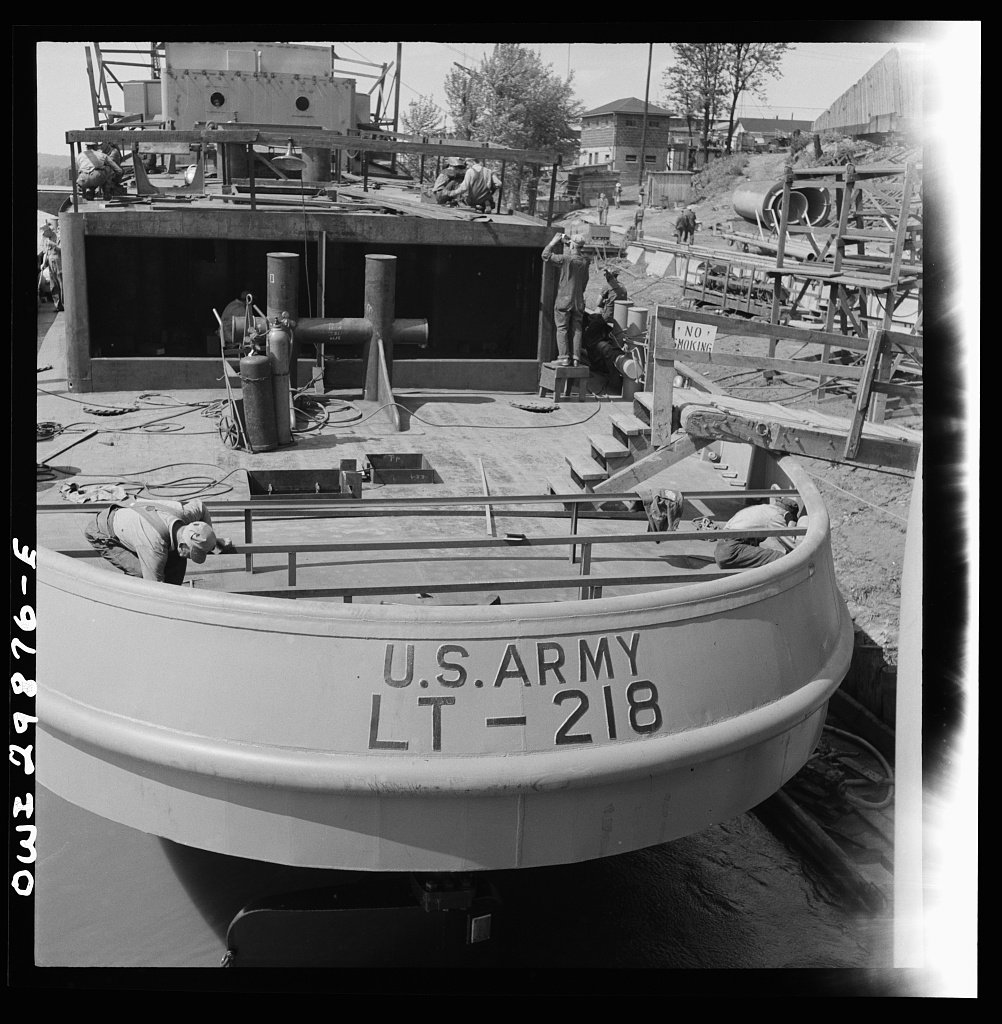 USS Barricade, a minelayer built at Point Pleasant for the Army and later converted for Navy use at Norfolk. She served in the Mediterranean and Atlantic during World War 2 (NavSource). 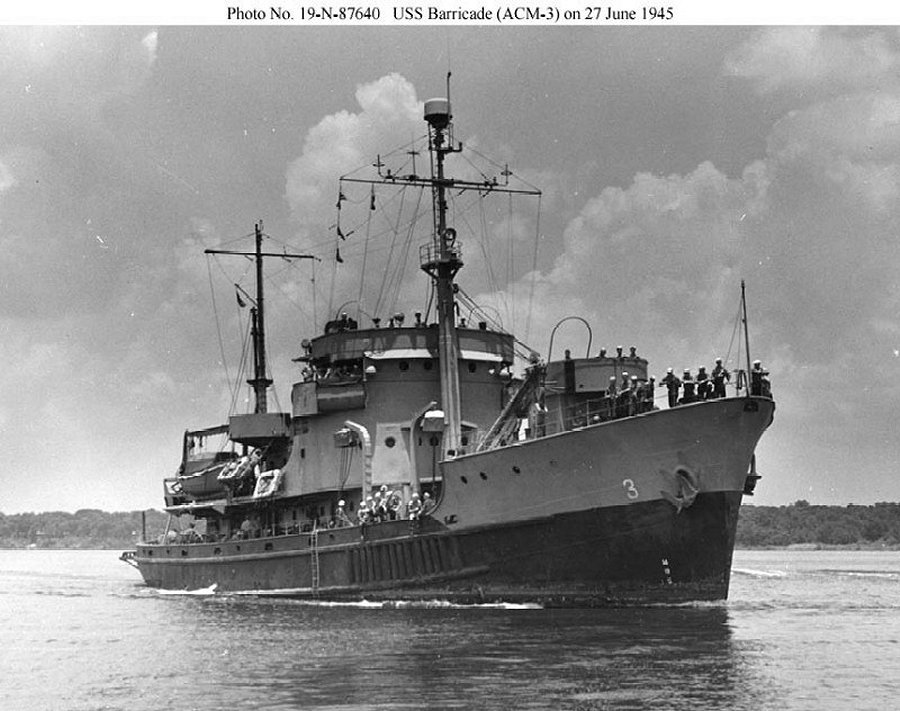 USS Chimo, another Marietta vessel, en route to the former Japanese stronghold of Saipan in 1945 (NavSource). 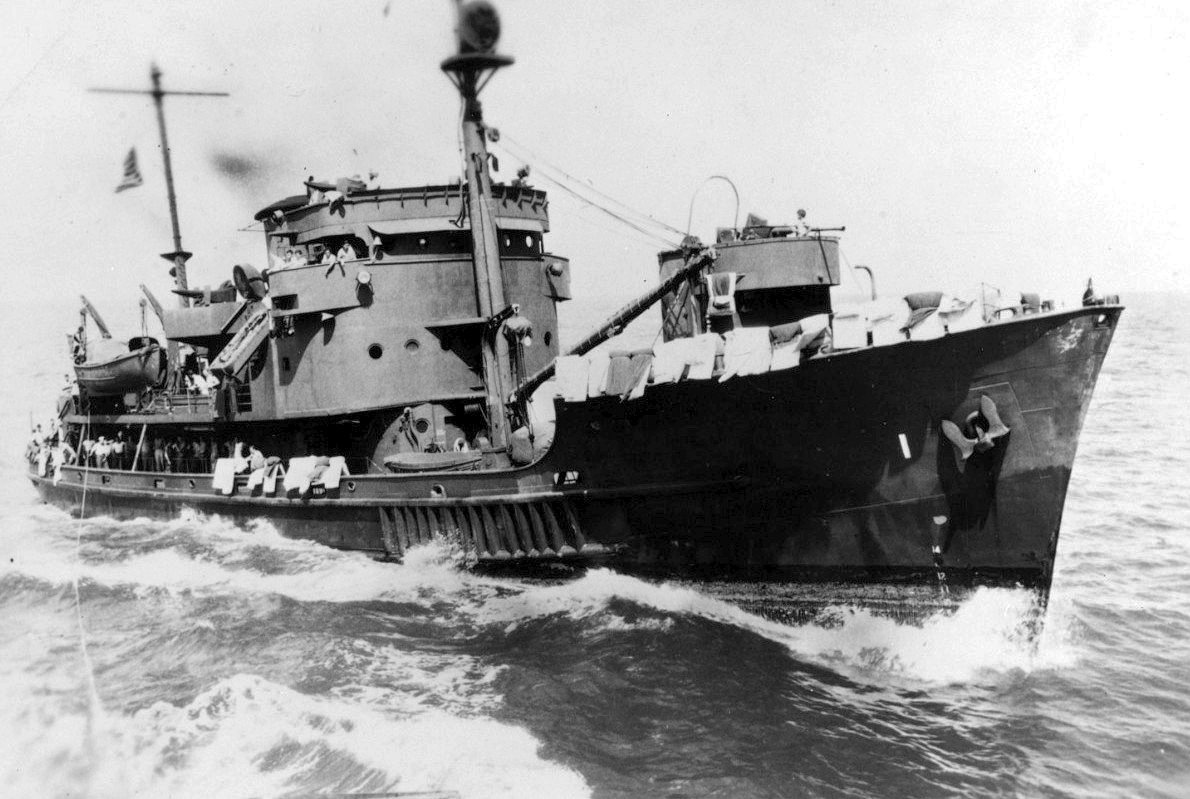 Originally built for the Army, this Marietta-built vessel became USS Bastion under Navy care. She was later transferred to the Coast Guard as USCGC Jonquil (NavSource). 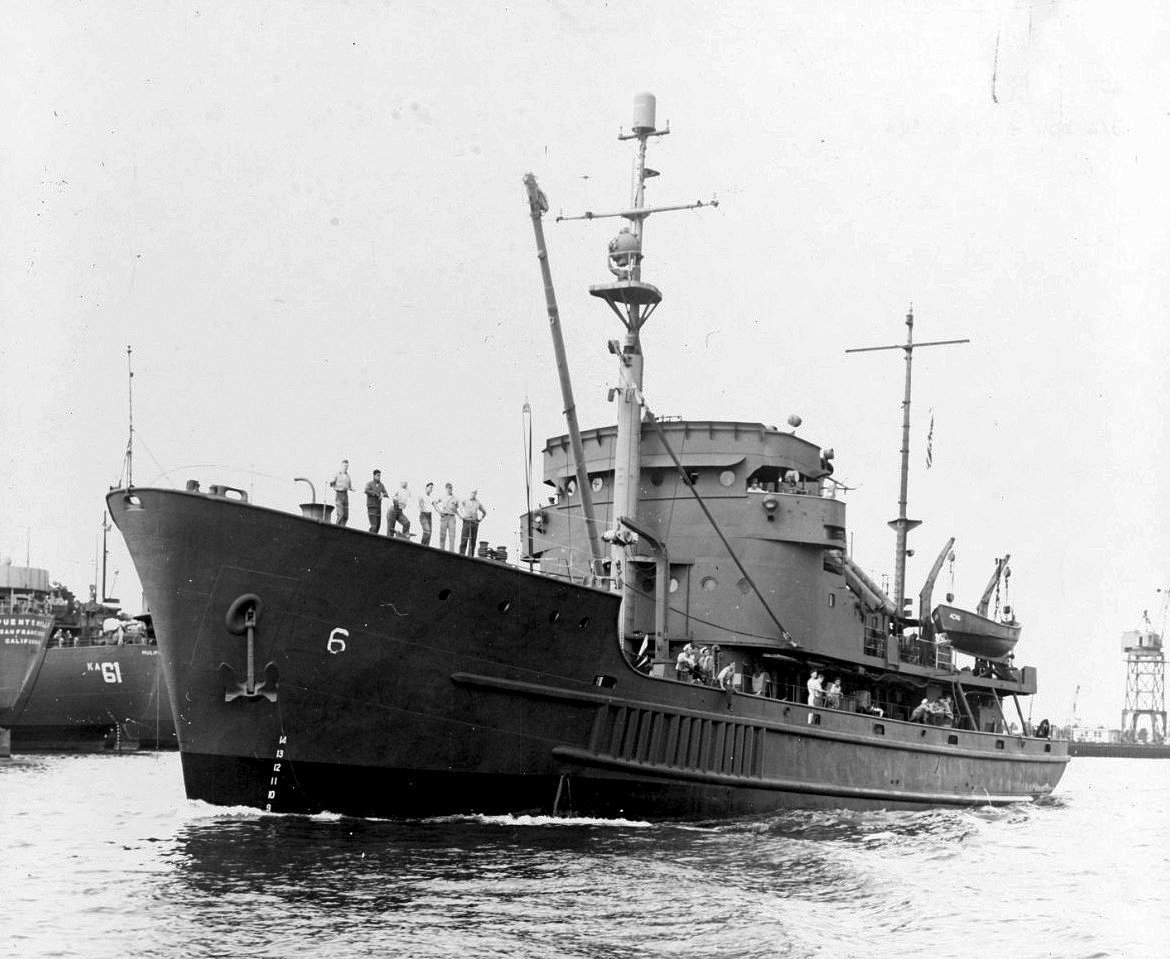 Following a fire in the 1870s, Robertson and Sons moved to Marietta, Ohio and in 1881 resumed business.  In 1892 the Robertsons sold the company to Alla Windsor, who changed its name to Marietta Manufacturing Company.The Windsors would lead the company for three generations and carry the company well into the 20th Century.

During one of the Ohio River's most catastrophic floods in 1913, the shipbuilding facilities were virtually destroyed. In the flood's aftermath, the nearbt city of Point Pleasant, West Virginia, also hit hard by the flood, set out to bring new businesses to the area.  Attracted by the West Virginia town's location on higher ground and its choice position at the confluence of the Ohio and Kanawha Rivers, the company moved to Point Pleasant in 1915. Marietta Manufacturing Company opened and began making steam engines for the government during World War I, but it would not venture into full-fledged ship production until 1918, when owner Walter Windsor moved cautiously into rivercraft manufacture. This new development led to explosive growth throughout the 1920s.

During World War II, the company built net tenders and mine planters for the U.S. Navy and steam tugs for the Army.  In 1944, the company received the "E" award for exceptional service in war time production.  Marietta would go on producing a wide variety of watercraft for the U.S. military, such as landing craft, patrol boats, and survey ships, throughout the war and the subsequent decades.

Due to an economic decline throughout the 1960s, however, Marietta ceased operations in 1970,  The facility was bought by Amherst Industries and became active again under the name Point Pleasant Marine Company.  The new company offered repair services and began building vessels a few years later.  The company shut its doors for good in 1984 after a strike by employees.