A A Cunningham Landmarker 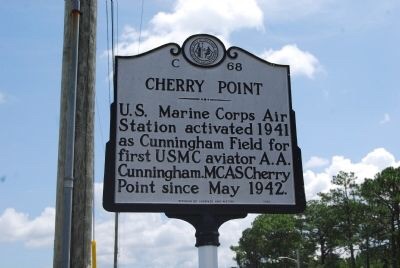 A A Cunningham was the first Marine Corps Aviator. He first accepted commission in the USMC as a 2nd LT in 1909.

During the summer of 1940 the Marine Corps conducted a search along the U.S. East Coast for a suitable site for an air station. The search brought them to an area in Craven County on the Neuse River between Hancock and Slocumb Creeks. There they created, in a matter of months, a self-contained city of 20,000. Rep. Graham Barden was the project's leading advocate in the Congress, which appropriated forty million dollars in 1941 for construction purposes. On September 4, 1941, the facility was designated “Cunningham Field at Cherry Point, North Carolina,” in honor of Lt. Col. Alfred A. Cunningham, the first Marine officer to become an aviator.