The southeastern corner of the intersection between High Street and Wall Street (formerly known as Maiden Alley) in downtown Morgantown, West Virginia has been a focus of community activity since the town’s inception in the eighteenth century. Originally listed as Lot 71 when Zackquill Morgan laid out his plan for the town between 1783 and 1785, the area has since served in a number of capacities, most notably as the site of the Jarrett Tavern, then the Wallace House, and later the Wiles Block Building. Over the course of this history, Lot 71 has played host to a number of prominent individuals and events, most notably welcoming Henry Ford, Thomas Edison, and Harvey Firestone during their brief visit to Morgantown in 1921 and serving as the backdrop of a 1926 murder that received nationwide attention. Through its association with these events and others Lot 71 represents a connection between the town and much broader processes, among them the histories of travel, technology, crime, and suburbanization. The site is currently occupied by a number of local businesses, all of which are open to the public.

Undated photo of the Wallace House, which once stood at the corner of Wall Street and High Street. 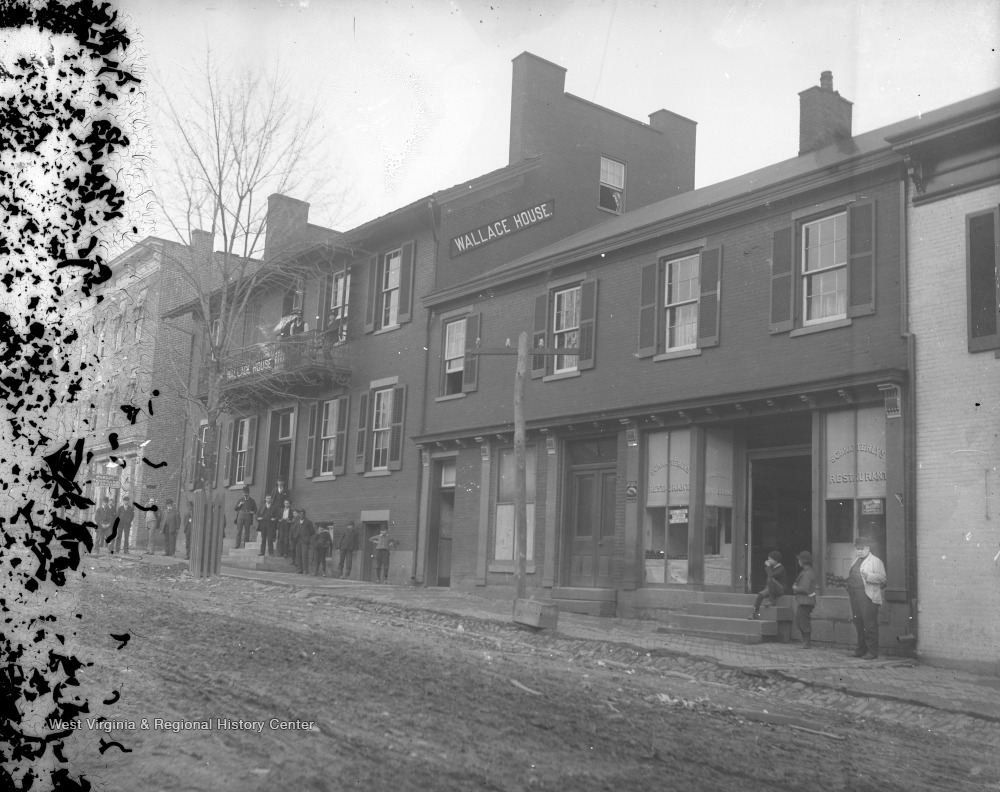 The Wiles Block building, which replaced the Wallace House. 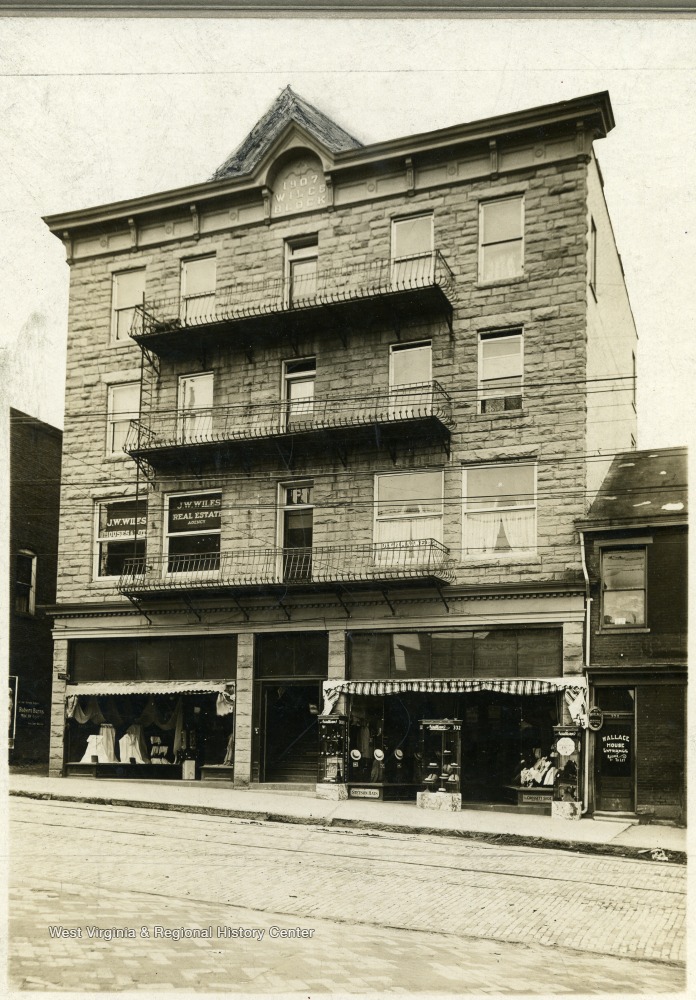 Undated photo of excavation at the former site of the Wallace House. 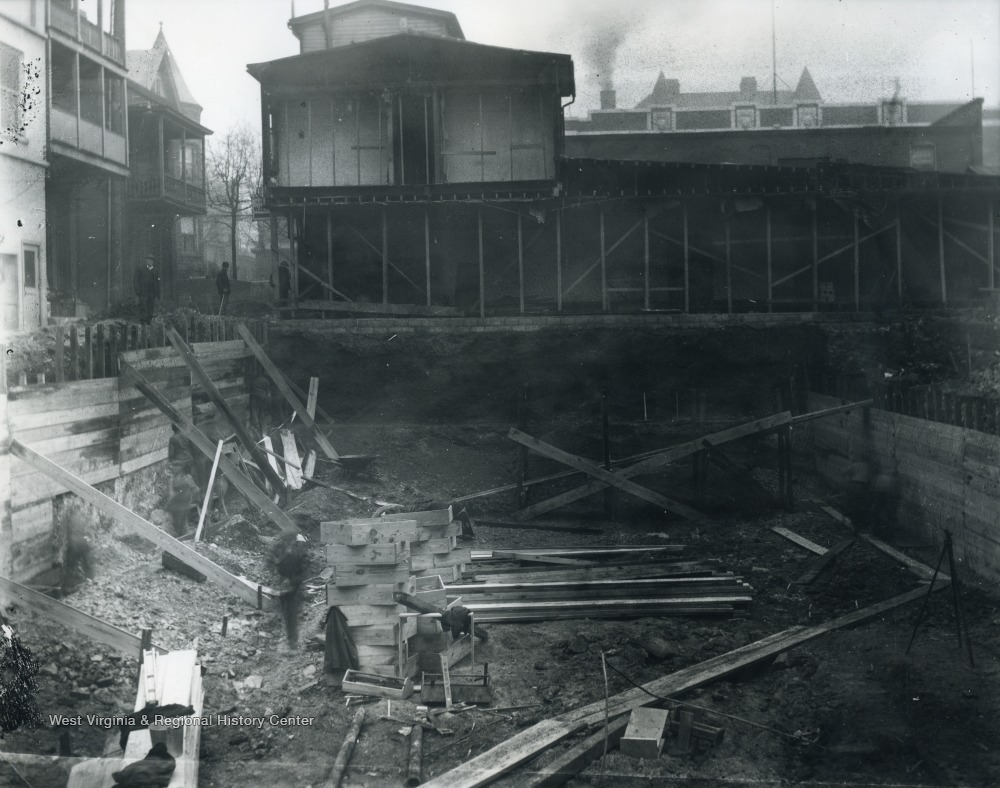 The original Four Vagabonds, three of whom visited Morgantown in 1921. 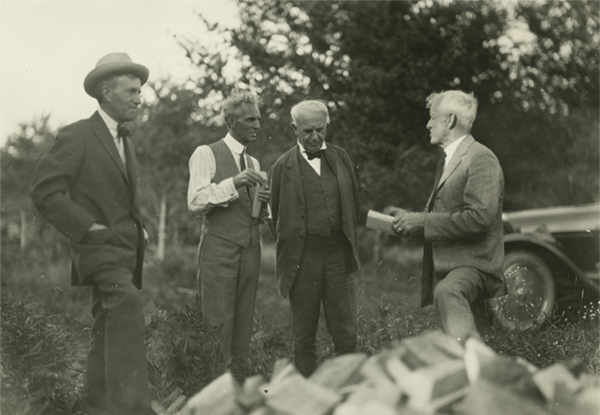 There were a number of prominent taverns scattered across Morgantown in the community’s early years but among the most prominent was that of Captain William N. Jarrett, who in 1805 took over Hugh McNeeley’s tavern after his death and subsequently married his widow Polly. Such establishments served a number of purposes during the era, attending not only to the demands of thirsty locals but to those of weary travelers looking for shelter on their way through town as well. They also often opened their doors to gambling, a choice that made them a frequent target for religious reformers but reliably attracted regular customers looking to strike it rich by fleecing their neighbors. Jarrett’s enterprise was no exception the games of whist, high end liquor, and lively conversation offered there brought in some of the area’s most prominent residents, among them town founder Zackquill Morgan (who, according to Jarrett’s accounts, drank only upon occasion and in moderation).

The site served in a similar capacity after the American Civil War, this time as the location of the Wallace House, a hotel and restaurant established by James C. Wallace in 1870 that continued in operation until the early twentieth century. The original Wallace House consisted of two adjoining red brick buildings, the slightly taller one to the north containing guest accommodations and the shorter one to the south holding the dining room. Wallace also owned and operated a livery stable where guests could house their horses on the corner of Maiden Alley (Wall Street) and Spruce Street where the Aull Center for Local History and Genealogy Research now stands. The first Wallace House (which came to be known by locals as the “Old” Wallace House) remained under Wallace’s control until 1898, when John G. Lantz purchased the property, refitted it with hot and cold running water, and reopened it as the “New” Wallace House. Lantz in turn sold the property in 1905, when C.D. Matthews purchased it and upgraded the facilities to include toilets. While the southern section of the Wallace House with the dining room (which could seat up to 150 people) continued in operation into the 1920s, the taller section to the north remained in its location for only two more years. Then, in 1907, local developer John Wiles purchased that section of what was once Lot 71 and constructed an office building there that came to be known as the Wiles Block Building. Wiles, who was responsible for much of Morgantown’s growth into the suburbs of South Park and Westover in the twentieth century, located his own office in the building and rented out the remainder of the space to a variety of other business establishments.

While the Wiles Block Building would have its fair share of excitement in the coming decades, the Wallace House next door was soon to entertain by far its most famous guests in the almost half a century in which it had existed. Those guests were Henry Ford, Thomas Edison, and Harvey Firestone, the famous “Vagabonds” who traveled the countryside of the United States on annual camping trips to advertise the utility of new technologies like the Ford automobile for long distance travel. From 1915 to 1920, the Vagabonds had been known as the “Four Vagabonds,” counting among their number the famous American naturalist John Burroughs. With Burroughs’ death in the spring of 1921, however, the Vagabonds sought a replacement, settling upon the current President of the United States, Warren G. Harding. Harding accompanied the Vagabonds for a portion of their trip through Maryland, but returned to Washington, D.C. prior to their arrival in Morgantown, an occurrence that took place by sheer happenstance. Once entering West Virginia, the Vagabonds’ plan had been to travel from Elkins to Fairmont before turning north toward Uniontown, Pennsylvania. Heavy rains made the roads in that direction impassable, however, and they chose instead to detour through Morgantown on August 2, 1921. Once there, the Vagabonds lunched at the Wallace House before touring the town and surrounding area. According to the Morgantown Post, when “questioned about the paucity of Fords” in the area by the Vagabonds locals responded that they had “too much respect for the flivver to use on West Virginia roads.”[1]

While the Vagabonds’ visit to Morgantown certainly brought the old Lot 71 a fair share of attention, it was an event next door at the Wiles Block Building that cemented it in local memory. Less than five years after the Vagabonds had come and gone, on April 15, 1926, the area’s residents once more crowded around the corner of High Street and Wall Street, this time to rubberneck at the scene of one of the town’s most notorious murders. That night, Georgia Ridgeway, nurse of local physician and Scotts Run coal mine company doctor William Bruce Borror, stabbed her employer with a butcher knife in the apartment of Borror’s secretary Rose Hastings. Hastings’ apartment, which adjoined Borror’s offices in the Wiles Block Building, was soon overrun by curious residents who ignored police instructions to cordon off the scene of the crime.

In the weeks and months that followed, the case received attention in local newspapers throughout the United States in areas as close as Pittsburgh and as distant as Utah and South Dakota. According to those outlets, which based their coverage on reports from local authorities, Ridgeway had attacked Borror out of jealousy after the doctor was visited by a female patient several times over the course of one day. Ridgeway herself appears to have remained relatively silent on the matter, and when Borror’s widow (and mother of his four children) visited her in jail shortly after the incident their conversation remained private. During the trial Ridgeway claimed as her defense that Borror was intoxicated on the night in question, had in fact regularly hosted drinking parties at his office in Morgantown and out at Scotts Run in defiance of nationwide Prohibition. According to Ridgeway Borror had in his state of inebriation attempted to disarm Ridgeway when she threatened with the butcher knife, and in the ensuing struggle fallen upon the blade by accident. Unconvinced, the jury found Ridgeway guilty and she was ultimately sentenced to twelve years in prison for second-degree murder. Eventually, she faded into obscurity. Borror’s funeral, on the other hand, had over a thousand attendees. Among them was an unnamed miner from Scotts Run who, according to the Charleston Daily Mail “sobbed” openly saying “I owe my life to him and would gladly have given it could he but have lived.”[2]

Through such events, the southeast corner of High Street and Wall Street shares connections to some of the most profound historical processes in the both the local and national pasts. Among them can be counted the history of travel in the United States over the course of two centuries, the expansion of Morgantown into the suburbs of South Park and Westover, and sensationalism of American media’s coverage of crime in the early twentieth century. These histories make the site a unique location in the area, despite the fact that no historic building remains there to be seen by passersby.

Guinn, Jeff. The Vagabonds: the Story of Henry Ford and Thomas Edisons Ten-Year Road Trip. Waterville, ME: Thorndike Press, a part of Gale, a Cengage Company, 2019.

“To Lodge Formal Charge Murder Against a Woman .” The Bluefield Daily Telegraph, April 16, 1926.