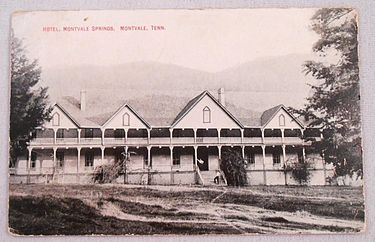 This hotel was not located downtown, but it was a key feature of Maryville. It was opened and operated in 1832 by Daniel Foute. At 1,500 feet above sea level, it was advertised as “free from flies, mosquitoes, and malaria.” The hotel featured 10 rooms, two stories, and a veranda. The name could have come from the Wallace Family, who found and named the area, or Sam Houston, who interacted with Native Americans in the area. William McTeer, in an advertisement, described the atmosphere as “pure and invigorating” and the scenery “romantic and picturesque.” In 1853, Asa Watson replaced the building with a three story, seven gabled building. It featured 125 rooms and 60 cottages on the lawn. It had many types of plants, and was considered the best hotel in the area. The nearby sulfurous spring had healing effects and is what drew many visitors. The spring would tranquilize all nerves and even cause people to involuntarily say “Peace on Earth and good will to man.” There were many other activities available, including hunting, music, croquet, fine dining, hiking, and ten pin. Some families stayed entire summers at the Montvale Springs Hotel. According to a newspaper from May 21, 1896, the hotel caught fire and burned down on May 15th. Everyone got out safely but damages were at least $45,000. At the time it burned in 1896, the resort had 100 beds, 12 large dining tables, 3 billiard tables, and 15 parlor chairs (among other things.) In 1904, Thomas Cooper modernized the hotel by adding a water tank that was run by gravity and running water, adding 4 water closets and 2 tub rooms. He then purchased an Edison DC generator, a steam engine, and electric carbon-filament light bulbs. Ludwig Phlanze purchased the hotel in 1911 and created a lake on the property by building a dam (Lake Sidney Lanier). The hotel burned again on November 21, 1933.