Situated at the corner of Vine Street and Riddle Alley on the eastern side of Conococheague Creek, Henninger Field was home to Chambersburg’s local baseball team from the field’s construction in 1895 to the team’s disbandment in 2010. The field is all that remains of a much larger complex known as Wolf Lake Park, an amusement park, manmade lake, and residential neighborhood built by local businessman Augustus Wolf for his employees at the turn of the twentieth century. Renamed in honor of longtime local baseball coach Clay Henninger in 1920, the field is notable as the site of an exhibition game between the New York Yankees and their Chambersburg feeder team in 1929 (during which Babe Ruth hit a home run over center field). As the only surviving remnant of August Wolf’s vision, Henninger Field stands as a testament to the lasting legacies of industrial paternalism’s rise and fall over the course of the early twentieth-century. As an athletic venue, it is a window into the ebb and flow of community pride and competitive recreation in the same period. Since spring 2019, the borough of Chambersburg and Wilson College have operated the field jointly as part of a contract in which they shared the renovation costs and agreed to use the facilities on a seasonal basis (Wilson in the spring and fall and the borough over the summer).

Henninger Field after the completion of Wilson College's renovations. 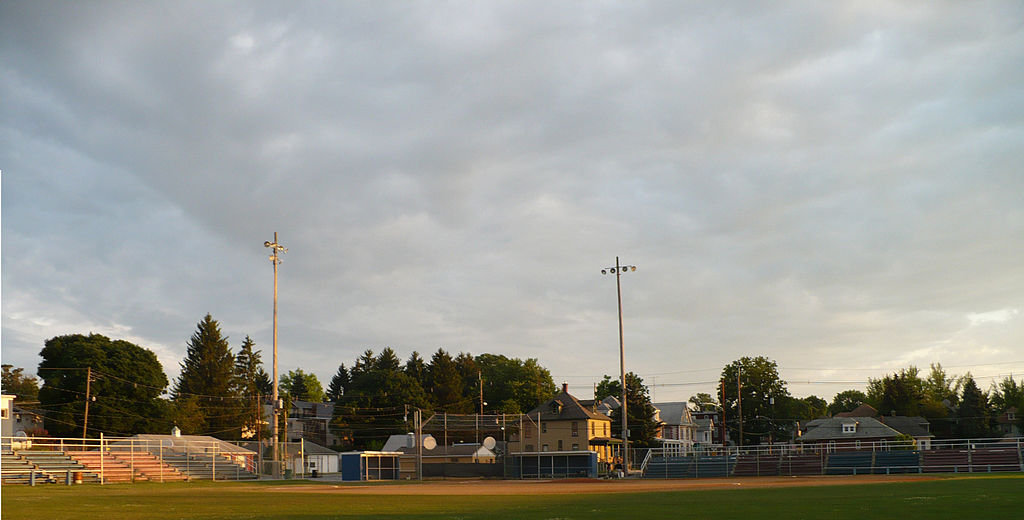 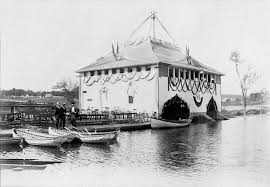 Chambersburg Maroons in 1915, with Clay Henninger in center 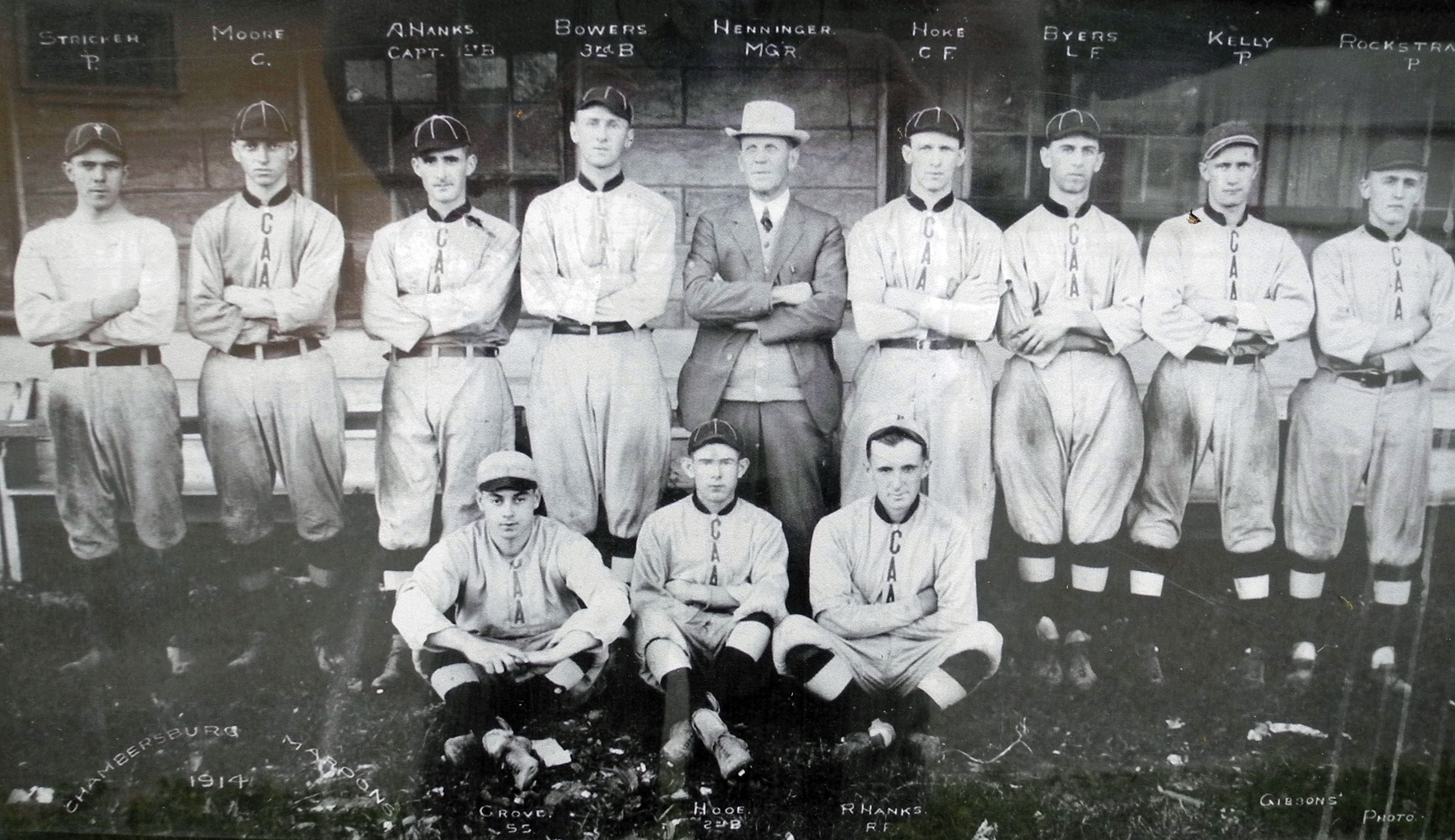 Built in 1895 as part of the residential and recreational complex Chambersburg manufacturer Augustus Wolf constructed for his employees on land adjacent to his factory on the Conococheague Creek, Henninger Field is central to the town’s economic and athletic history. This complex, named Wolf Lake Park after the half-mile-long artificial lake Wolf created by damming the upper Conococheague, featured a bathhouse, bowling alley, dancing pavilion, carousel, and boat tower and originally lay outside the town’s boundaries and jurisdiction. Two years after the park became fully operational in 1901, however, the borough made the decision to annex it, choosing to gradually demolish all but Henninger Field over the course of the twentieth century as attendance declined. Although the most notable occurrence at the site by far is the exhibition game between the World Series-champion New York Yankees and the Chambersburg Young Yanks on May 31, 1929, the field has hosted a wide array of events over the years. Not only did it serve for over a century as the home of the town’s local baseball team (known at various times as either the Maroons or Young Yanks), it also did likewise for local high school football, baseball, and soccer teams and the occasional traveling circus. After the disbandment of the Chambersburg Maroons in 2010, the field lay unused for several years before resuming operation under the joint control of the borough of Chambersburg and Wilson College. As part of an agreement by which they committed to sharing the costs renovating the field’s facilities, Henninger opened as the home of Wilson’s new baseball team in spring 2019 as part of the college’s sesquicentennial celebrations. As per Wilson’s agreement with the borough, the field is open for public use over the summer and reserved for college activities in the spring and fall.

Augustus Wolf came to Chambersburg in 1884 in the hopes of powering a factory using the current of the nearby Conococheague Creek, a lure that brought many such entrepreneurs to the area over the course of its history (including the town’s founder, Colonel Benjamin Chambers). Wolf ordered the construction of a 10-acre complex, which included a 250,000 square foot factory for the manufacture of milling equipment and a model mill where he displayed that equipment in operation. Several years later he arranged for the creek to be dammed to create Wolf Lake, which eventually became the crown jewel of the recreational and residential facilities he built at the site for the use of his employees. Those facilities included employee housing, a 100-foot tall boat tower, a bowling alley, a carousel, a dance hall, and dining room, all of which quickly became the hub of employee and community recreation in the early twentieth century. The baseball field (originally named Wolf Ball Park) was one of the first facilities Wolf built at the location and is the only one still standing today, in part as a result of its continuous use by Chambersburg’s local baseball team from 1895 to 2010. In 1920 a vote conducted by the town’s newspapers resulted in the field’s renaming in honor of Clay Henninger (the team’s first coach), a Chambersburg native known in his early years as “Scoop” for his abilities at second base and as “Pop” later on during his multi-decade career as a coach.

Originally playing as part of the amateur Cumberland Valley League, the Chambersburg Maroons joined the professional Blue Ridge League in 1914. This move gave the team the opportunity to establish a relationship with major league baseball, which relied on regional leagues like Blue Ridge to train and supply new talent. The Maroons’ efforts finally bore fruit after their 1927 championship season; the following year the New York Yankees chose to purchase the team, renaming it the Young Yanks prior to the start of the 1929 season. It was that team that faced the World Series-champion Yankees in an exhibition game on May 31st of that year, ultimately losing the game 8 to 1 and surrendering a three-run home run to Babe Ruth over center field in the fifth inning. It was the largest crowd the field had ever hosted, so large in fact that a set of bleachers collapsed under the weight of its occupants during the second inning, momentarily halting play. According to local newspaper accounts Ruth was particularly well-received by the town’s children, with whom he evidently exchanged a number of jokes and spare balls over the course of the game. Afterwards Ruth and teammate Lou Gehrig remained at the field to sign autographs, staying until every request for their signatures had been satisfied. The Yankees sold the Young Yanks the following year and withdrew from the Blue Ridge League, which ceased operations shortly thereafter. Chambersburg’s baseball team soon reverted to its former identity as the Maroons, playing under that moniker at Henninger Field in a series of semiprofessional leagues until its disbandment in 2010. The facility reopened in spring 2019 as the home of Wilson College’s new baseball team.

Henninger Field’s use by the athletic organizations of Chambersburg over the past century has ensured its centrality to the community both past and present. While its history as the home of Chambersburg’s sports teams might bring it more attention, however, Henninger Field’s origins as the brainchild of Augustus Wolf connect it to events on a much larger scale. Henninger and the other structures that once surrounded it at Wolf Lake Park are the products of an employment philosophy that emerged among manufacturing executives in the early twentieth century. This philosophy, known by historians as industrial paternalism, aimed to combat the conditions that encouraged labor unions and increase workers’ dependence upon employers by obviating their need for other forms of support like state welfare. The facilities automaker Henry Ford constructed for his employees in Dearborn, Michigan are perhaps the most famous expression of industrial paternalism, but the philosophy’s reach extended across the early twentieth century United States. Residential and recreational complexes sprung up next to factories in small towns across the nation, rising and falling in popularity just as Wolf Lake Park did. The structures that remain from these complexes, like Henninger Field, are a testament to the lasting legacies of US industrialization and its impact on the daily lives of the American citizens that drove it forward.

While the rest of Wolf Lake Park has disappeared over the years (most recently Wolf Lake itself, which a local contractor drained in 2006), Henninger Field has served in its original capacity as an athletic facility almost continuously since its construction in 1895. The only gap, between 2010 and 2019, occurred after the disbandment of the Chambersburg Maroons and continued until the field’s joint purchase under an agreement between the borough and Wilson College. Its longevity and survival are indicative not only of the site’s importance to local sports history, but of the centrality of sports to the community more generally as well. Anyone interested in experiencing a taste of that history for themselves can visit Henninger Field during community events in the summer or collegiate ones in the spring and fall.