The Vienna Presbyterian Church, established in 1805, is housed in the westernmost building on Vienna Township Green, located on the northwest corner of Vienna Center (the intersection of Warren-Sharon and Youngstown-Kingsville roads). The church building, constructed in Classical Revival style in 1853-1854, was dedicated on May 3, 1854. 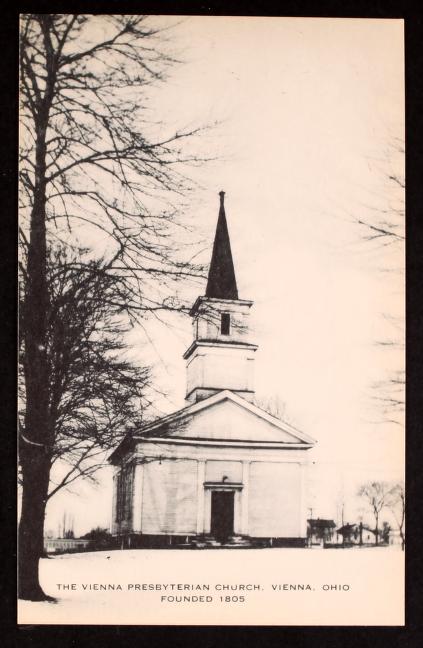 The church was originally organized as a Congregationalist Church of Christ. On September 22, 1805, thirteen persons met at the home of Samuel Clinton. With the help of the Reverend Thomas Robbins (1777-1856), an itinerant minister sent to the Western Reserve by the Connecticut Missionary Society, these individuals were formed into an ecclesiastical society, the legal body of Congregationalism that oversees the temporal concerns of a church.

Reverend Robbins wrote of this meeting in his diary:

[September] 22. Preached from Matt. xvii: 5 and Gen. v: 24. After sermon in the afternoon publicly organized thirteen persons--seven men and six women--as a church of Christ, charged them to keep covenant with God and one another, and endeavored to commit them to the care and grace of the great head of the Church. Several people attended from the neighboring towns. Rainy.

Though Reverend Robbins and Reverend Joseph Badger (1757-1846), who had preached at Vienna in 1800 and 1801, were Congregational ministers, they were united with Presbyterians in their efforts to bring organized religion to the Connecticut Western Reserve. As missionaries of the Connecticut Missionary Society they heeded what was called the Plan of Union, instituted in 1801. Some churches in the Western Reserve attempted to combine both denominations, but this practice was eventually abandoned.

According to a published history of the church, the Vienna congregation resolved on May 3, 1854, to adopt Presbyterianism, merely formalizing longstanding practice. Yet, according to an 1882 history, church members unanimously adopted a resolution to adopt “the Presbyterian form of government and discipline” on March 2, 1871.

On June 20, 1810, eight acres on the northwest corner of Vienna Center was purchased by the ecclesiastical society for $20.00. This is now Vienna Township Green. No permanent church building was constructed until 1837. From 1805 to 1837, church services were held in congregants' homes and in schoolhouses, including the Vienna Academy building constructed in 1825. This boys-only academy was established by the Church's minister, Reverend Nathan B. Derrow. The Academy building was moved in the early twentieth century and now serves as Vienna Township Hall.

The timber for the 1837 church building was cut from the land of George Alderman. On January 18, 1853, this building and all its contents were destroyed by fire. The new church building was dedicated on May 3, 1854, and is still in use today. In June 1963 the church was remodeled to enlarge the sanctuary and to add a vestibule. The mortgage was burned on June 24, 1973.