Church of the Holy Trinity

This historic Gothic Revival church, designed by Henry C. Dudley and constructed between 1870 and 1874, is located in downtown Middletown, Connecticut. The Holy Trinity parish has played an important role in the establishment and development of the Episcopal Church in Connecticut. The parish's origins stretch back to the 18th century. Construction of this church in the late 19th century was necessary due to the continued expansion of the parish. Located behind the church, the rectory was built in 1902 and is a prominent example of a Colonial Revival residence.

1910 postcard image of the church. 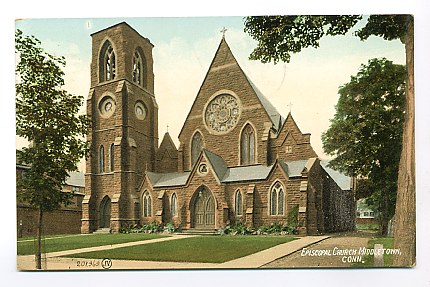 History of the Holy Trinity Parish
The Holy Trinity parish has origins stretching back to the 18th century. In 1724, an Anglican congregation was organized in Middletown, followed by the Parish of Christ Church, formed in 1750. This parish built its first church in 1755 under the leadership of the Reverend Abraham Jarvis.

Alongside nine other Connecticut clergy members, Jarvis worked to develop a distinctive American Church, separate from the Church of England, following the American Revolution. After his consecration by the Church of Scotland, Samuel Seabury was appointed the first bishop of this Church in America. Bishop Seabury ordained a number of Episcopalian clergy at the church in Middletown, helping establish the Protestant Episcopal Church in the newly formed United States. In 1788, the Episcopal Church gained official recognition. In 1797, Jarvis was chosen as Seabury's successor and became the second Bishop of Connecticut.

The Parish of Christ Church outgrew its original church and constructed a second one on Broad Street in 1834; this building is now the Russell Memorial Library. The original parish church was demolished. In 1857, the Society of Christ Church renamed itself the Society of the Parish of the Holy Trinity. During the latter half of the 19th century, Holy Trinity maintained close ties with Berkeley Divinity School, an Episcopal seminary which operated in Middletown from its 1854 foundation until its 1928 relocation to New Haven. During this time, the Church of the Holy Trinity became the cathedral of Connecticut's Episcopal Diocese.

The Current Church of the Holy Trinity, constructed 1870-74
Today, visitors to Middletown can see the third church constructed by the Holy Trinity parish. Located on Main Street, the church is a fine example of Gothic Revival architecture and was designed by Henry C. Dudley. It was built to suit the needs of the expanding parish, which had once again outgrown its previous church. This new Holy Trinity church served as the cathedral of the Diocese until 1899. Multiple other institutional buildings were constructed in the Gothic Revival style in Middletown during the latter half of the 19th century, a time of economic growth for the city.

The church features a brownstone exterior, slate shingled roof, gabled dormers, and buttresses. Inside, the church walls and ceilings are plastered and accented by wooden beams. Stained glass windows depict scenes from the Bible, saints, and decorative motifs. A rose window appears over the church's primary entrance.

The nearby rectory was designed by H. Hilliard Smith and built in 1902 in the Colonial Revival style, popular in Middletown in the early 20th century. The building was first inhabited by the Reverend Edward C. Acheson, who went on to become the sixth Bishop of Connecticut.

Working for the Greater Middletown Preservation Trust, Robert Svec prepared the nomination form for the inclusion of this property on the National Register of Historic Places. In his words,

The Church of the Holy Trinity, complemented by the rectory behind it, is one of the city's most prominent landmarks. These two buildings exemplify the heritage of the Episcopal Church in Middletown and its substantial religious contribution to the community. The interval between the construction of the structures was characterized by marked industrial and residential expansion in the city. The buildings, displaying sophisticated architecture, reflect the vitality of the parish and Middletown during this era.