The Woody Guthrie Center preserves and promotes the life and legacy of one of America's most influential singer-songwriters, Woody Guthrie (1912-1967). To center features an interactive museum with many of Guthrie's items on display including musical instruments, original artwork, and notebooks and lyrics. There are photographs and memorabilia on display as well, and visitors can also hear samples of his music and watch a short biographical film. The center also honors the legacy of Guthrie's son, Arlo, who became an internationally known songwriter and activist in his own right. Many of his items are on display including the guitar he played at Woodstock, original handwritten lyrics, and some of his photographs. Another highlight of the center is the archives, which contains the largest collection of Woody Guthrie primary materials in the world. The archives also contains materials of singer-songwriter Phil Ochs (1940-1976) who was known for music and social activism. The center also offers a variety of events and educational opportunities.

The Woody Guthrie Center honors the legacy of its namesake, Woody Guthrie (1912-1967), who was one of America's most influential singer-songwriters. 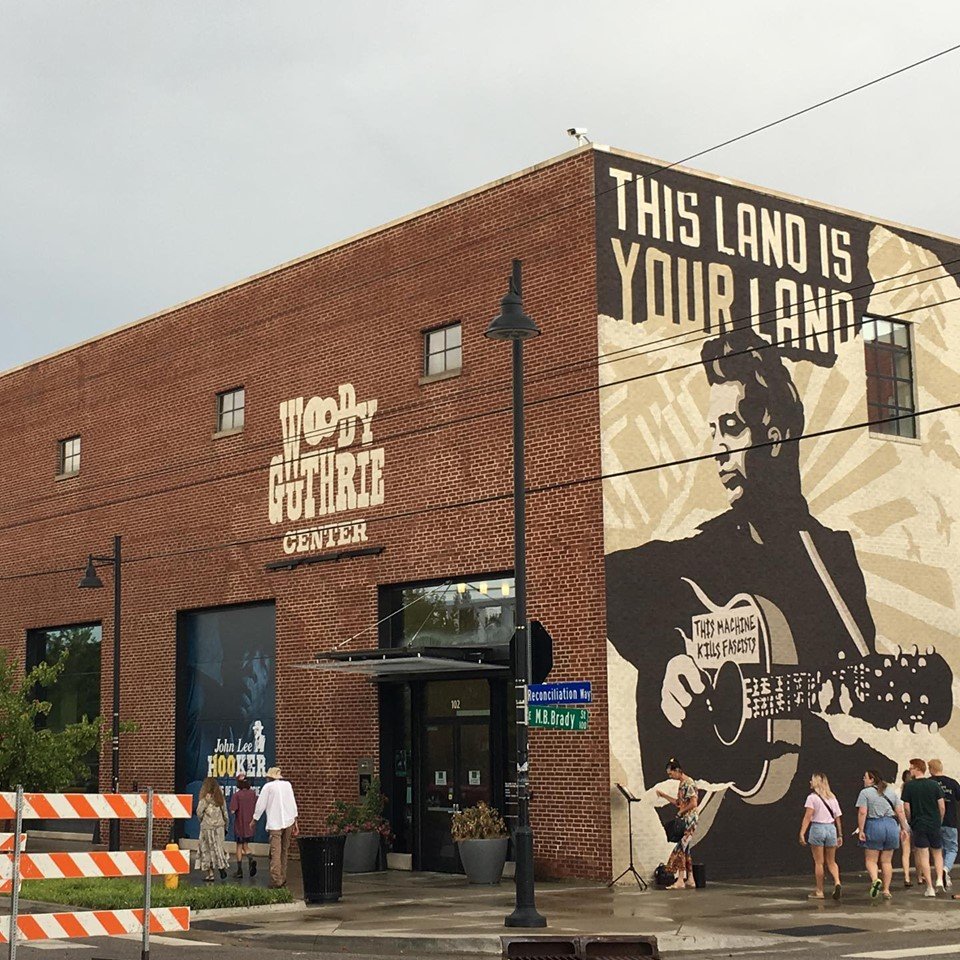 Woody Guthrie was born on July 14, 1912 in Okemah, Oklahoma. He was exposed to music at an early age as his father and mother were both interested in music. His father, who was a politician, cowboy, and land speculator, taught him Western and Indian songs as well as Scottish folk tunes. His mother knew many songs—Guthrie called her an "ear musician"—and she played the piano and sung to him. Through his parents, Guthrie developed a keen sense for music and stories, and he was always willing to learn about the world around him. He also learned to play the guitar and harmonica.

Unfortunately, Guthrie experienced tragic personal losses growing up, which influenced his songwriting. His sister, Clara, died in a fire that burned down the family house and his mother was placed in an insane asylum for Huntington's Disease when Guthrie was a young teenager. Additionally, his father ran into serious financial trouble after some of his real estate deals failed, which forced his father to find work in Texas. To earn money, Guthrie started to busk (perform on the streets); this enabled him to develop his musical skills and social views. He married his first wife, Mary Jennings, at the age of 19 in Texas (he moved there to live with his father) and they had three children together.

The Great Depression and the Dust Bowl forced Guthrie to leave his family in 1935 and head west to look for work. He traveled via hitchhiking and riding freight trains, and he would perform as often as he could, usually in homeless and migrant camps. Sometimes performing was the only way he could eat. It was through these experience that Guthrie gained a sense of solidarity for workers' rights and other liberal causes. He also developed a love for the road.

Guthrie's first big break came in 1937 in Los Angeles when he got a job as a radio performer singing Oklahoma ("Okie") folk songs with partner Maxine "Lefty Lou" Crissman. Over time, Guthrie incorporated his populist political and social views into his songs. This earned him increasing fame, especially in the migrant worker community.

He made his way to New York City in 1940 where he met and collaborated with other well-known musicians including Pete Seeger. Guthrie played a key role in pushing folk music as a social force during the early 1940s. As a result, his stature rose significantly around the country. In 1943, he wrote the iconic populist American song "This Land is Your Land." Guthrie also married his second wife, Marjorie; they had four children together.

Towards the end of the 1940s, Guthrie started to exhibit signs of the disease that killed his mother. He decided to go on the road and traveled to California again, where he met and married his third wife, Anneke (they had a daughter, his eighth child). The disease became worse by the end of the 1950s and Guthrie had to be hospitalized for the rest of his life. He passed away on October 3, 1967.