The House Behind the Cedars

The likely location of the childhood home of Charles W. Chesnutt and the inspiration for the home in his novel "The House Behind the Cedars."

One Acre: the image shows part of the GIS Map for Cumberland County. The area highlighted consists of exactly one-acre split across three lots. 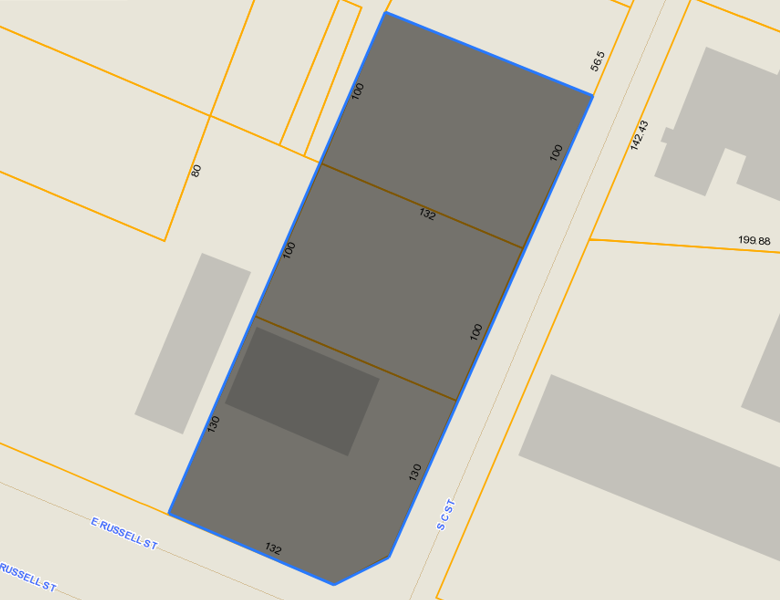 Two Acres: the map shows two acres, with the bottom half (one acre) being the land that was given to Andrew Jackson Chesnutt and his brother, George Washington Chesnutt. 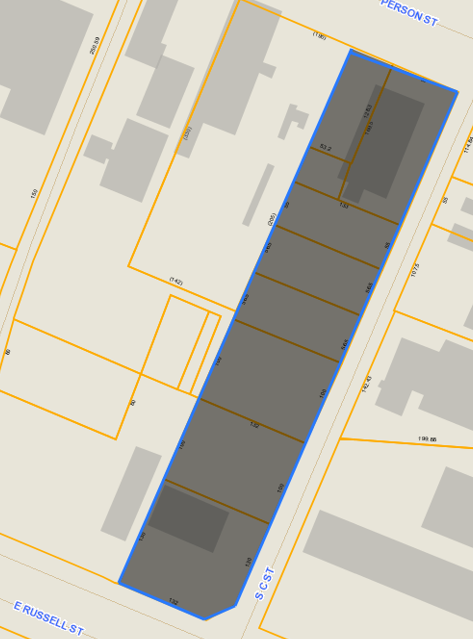 House Behind the Cedars: looking west from C Street, at or about the boundary line between the upper two lots.

The location of the famous House Behind the Cedars has long been uncertain.

Some sources place the home near the corner of C and Person Streets.

According to Jon Young, "In an article in the July 1949 issue of Crisis magazine, John W. Parker, a former English professor at Fayetteville State University, states that the real 'house behind the cedars' stood on this site [corner of C and Person] until 1948, when it was torn down for commercial reasons."
However, in his will, Andrew Jackson Chesnutt mentioned two properties: the home in which he was living at the time of his death and the land on which it stood, and the home and land adjoining which was given to him by his father.
The land given Andrew by his father (one acre) was shared between himself and his brother, George Washington Chesnutt, according to the deed from 1836.
This one-acre was divided from a two-acre plot that was originally part of the estate of Dolphin Davis (CCROD Book 41, Page 398).
In 1870, George Washington Chesnutt, then living in Kentucky, sold the rights to the acre to Andrew (CCROD Book 59, Page 116).
Upon Andrew's death in 1920, the home and land given to him by his father went to his wife, Mary.
Upon her death in 1926, according to the instructions in Andrew's will, the home and land went to his daughter Sara Chesnutt.
On Sara's death in 1969, the land was willed to Evans Metropolitan A.M.E. Zion Church.
The church then sold this land, along with the lot on Russell Street, to Tommy West in 1987 (CCROD Book 3297, Page 230).
In 2006, this lot was sold to Charles McPhail and Danny Fann of Roseboro, North Carolina, who hold it to this day (CCROD Book 7142, Page 350).
It seems safe to assume that the upper two lots are the former location of the "House Behind the Cedars."
-----------------------------
Full image descriptions for acreage maps:

One Acre: the image shows part of the GIS Map for Cumberland County. The area highlighted consists of exactly one-acre split across three lots. The top lot is owned by Evans Metropolitan A.M.E. Zion Church. The middle lot is currently owned by Charles McPhail and Danny Fann, while the lower lot is owned by Tommy West (CCROD Book 7142 Page 350 and Book 3297 Page 230).

Two Acres: the map shows two acres, with the bottom half (one acre) being the land that was given to Andrew Jackson Chesnutt and his brother, George Washington Chesnutt. The two acres were originally a part of the Dolphin Davis estate, being split in half during the division of that estate according to CCROD Book 41, Page 398. This means that to place the House Behind the Cedars along Person Street would be incorrect. It almost certainly occupied the area above the southernmost lot, perhaps on the boundary between the two.