Constructed as a headquarters building for the Illinois Central Railroad as well as a public train station for the fledgling city of Amboy in 1876. It was designed by railroad staff architect James Nocquet after a fire destroyed the original Illinois Central offices on the site. The building was added to the U.S. National Register of Historic Places in 1992. The rectangular, Italianate building operated as Illinois Central Railroad's Northern Division headquarters until 1894. After 1894 the rail line through Amboy was downgraded in importance by the railroad and the division headquarters moved elsewhere. Today the depot is operated as a public museum. The museum grounds include the depot, which houses artifacts and exhibits and several outbuildings. Also on the property is a steam locomotive which, in 1976, was the last steam engine in the United States to be commissioned for regular freight service. 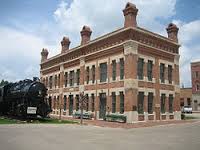