The Bristol Virginia-Tennessee slogan sign is located on State Street along the officially-recognized border of the two states. Initially constructed atop a hardware store in 1910, the sign was moved to its current location five years later, in 1915. The initial slogan of the sign said, “PUSH! – THAT’S BRISTOL,” but since 1921, and still today, its slogan is, “A GOOD PLACE TO LIVE.” The current slogan came as a result of a new slogan contest in 1921. The Bristol slogan sign was added to the National Register of Historic Places in 1988 as “the most identifiable landmark of the twin cities of Bristol, Tennessee and Virginia.” ^(2) 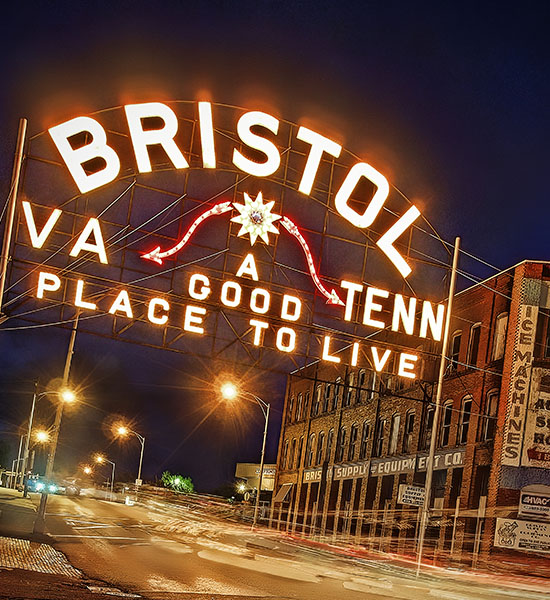 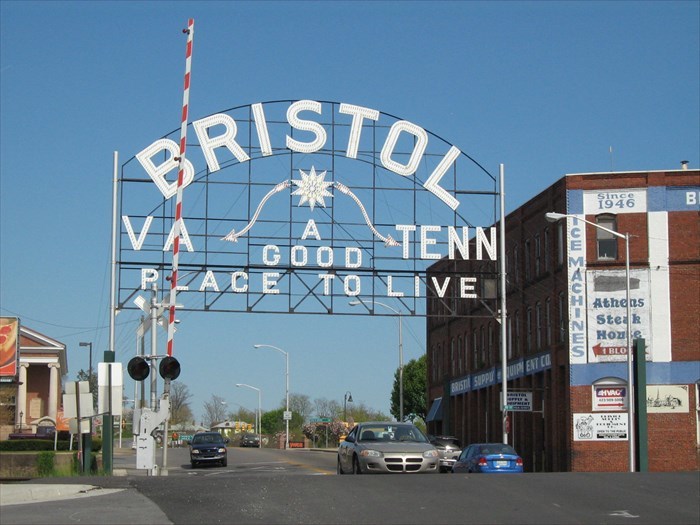 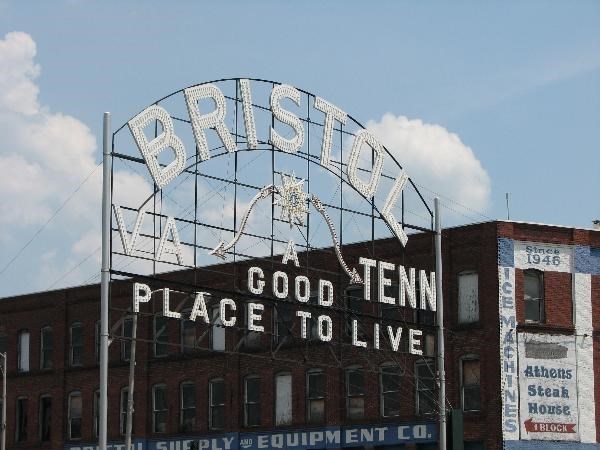 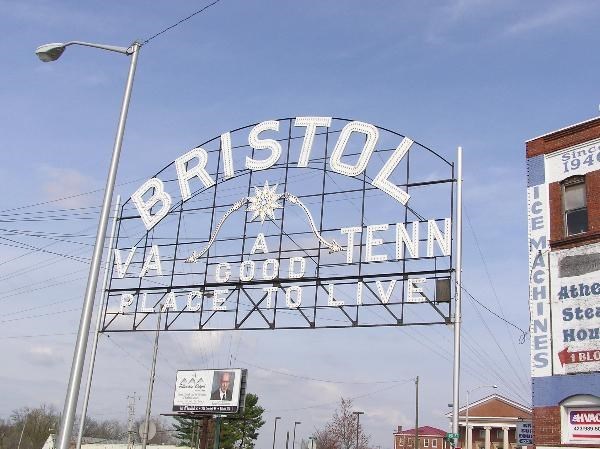 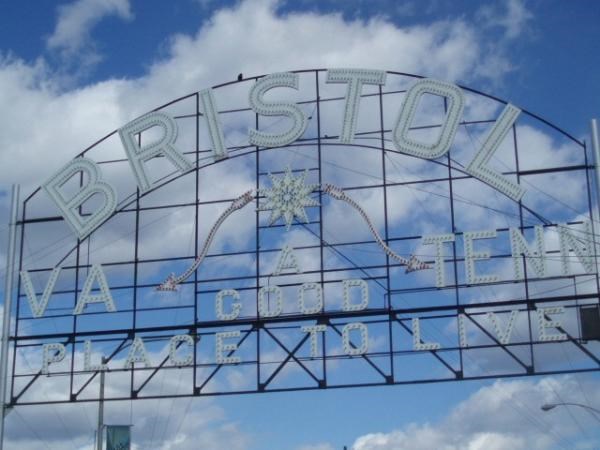 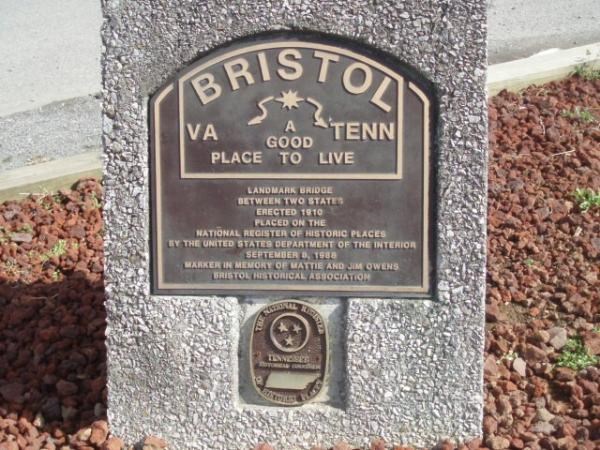 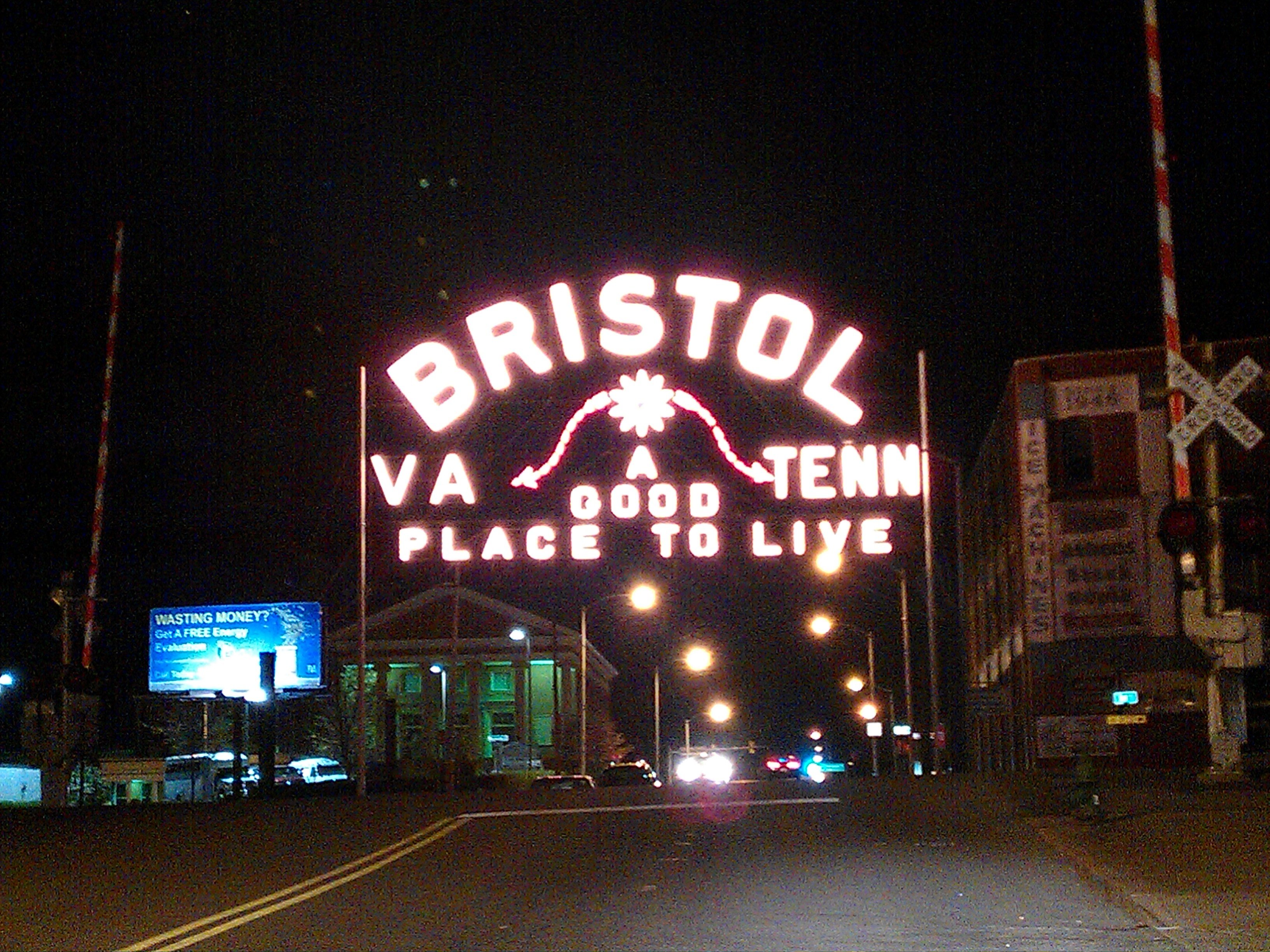 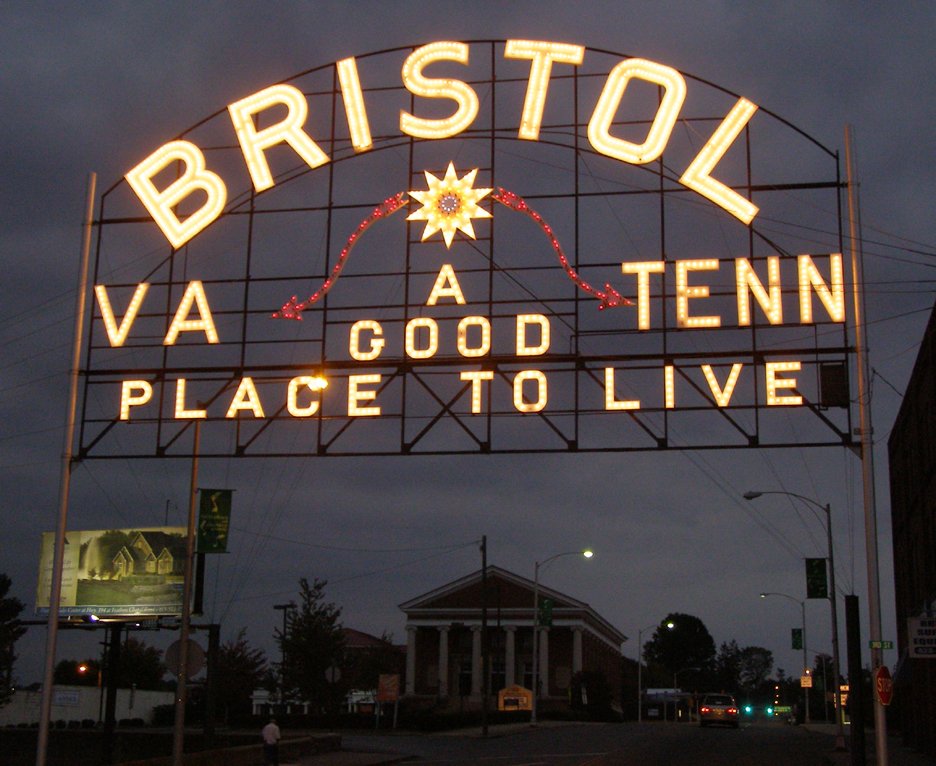 The sign’s initial location at the time of its construction beginning on June 28, 1910, and for five years following, was atop the Virginia-Tennessee Hardware Company building on Third and State Streets. Though the sign was initially erected on June 28, its steel frame was not completely constructed until July 1st. On the 2nd, its letters were hung and essentially completed. The sign was not actually lighted for the first time until the 4th of July that year as part of a presentation ceremony by the Bristol Gas and Electric Company.

Three years after the construction of the sign, in 1913, the owners of the hardware store where the sign was located requested it be removed due to damages it was causing to the building’s structure. In 1915, the sign was removed from the Interstate Hardware Company building, formerly the Virginia-Tennessee Hardware Company. After some maintenance, it was slightly remodeled for proper fitting and moved to its new location on East State Street at Washington and Second Streets, where it remains today. The sign was erected at its current location in April that year, its base twenty-five feet above the street, and its top about fifty-three feet high.

In 1917, the sign became the subject of much public criticism as a result of its many failing lightbulbs. As a result of the failing bulbs, the sign would often visually appear to read, “PU… THAT’S BRISTOL” or “..SH… THAT’S BRISTOL.” Although new green and red lightbulbs were then installed, several white lightbulbs still rarely functioned properly, and the Bristol public was unsatisfied. By 1921, an official campaign for a new slogan was established and had gained considerable support from the public.

Following a competition for a new slogan resulting from the public pressure to update the sign, a new slogan was officially announced on April 30, 1921. The new, and current slogan, reads: “BRISTOL… A GOOD PLACE TO LIVE.” Though the slogan on the bottom line of the sign was entirely changed, the structure of the sign itself was ostensibly unaltered. The exact date of the replacing of slogans on the sign remains unclear.

For decades, the sign was essentially unaltered, only occasionally undergoing very minimal maintenance procedures. In 1969, a campaign with considerable public support was started to entirely remove the sign from Bristol due to deterioration and rusting. Despite the movement gaining significant momentum, the sign was never removed. Sometime during the 1970s, the sign was repainted, but did not prevent another movement to remove the sign in 1982. Following the second movement to remove the sign, a Save our Sign campaign began refurbishing the sign significantly, including applying new angle irons, bolts, aluminum support poles, paint, and a synchronizer for flashing lights and arrows.

Earlier this year, after a long period of essentially no major work being done to the historic sign, the Bristol Herald Courier reported the twin cities had agreed to split the cost of restoring, renovating, repairing, and repainting it. In addition, the sign’s current 1,330 conventional lightbulbs were to be replaced with LED bulbs for higher sustainability and lower electricity costs. The total cost of the restorations to be completed by Reed Painting was reportedly around $24,000.

In 2010, the twin cities of Bristol, Virginia and Tennessee hosted a celebration at the Bristol Train Station honoring the 100th anniversary of the Bristol slogan sign on State Street. At the event, as reported by the Bristol Herald Courier, Tod Swormstedt, founder of Cincinnati’s American Sign Museum, said, “There’s not a lot of signs around that are 100 years old, and the ones that are certainly aren’t in as good shape as this one.” 1