Named in honor of former UC Berkeley President Robert Sproul, this campus plaza has long been the center of campus activism. The plaza was the site of many anti-Vietnam protests and the location of nationally-significant speeches such as Stokely Carmichael's Black Power Speech in 1966. The steps of the plaza are named in honor of activist Mario Savio who spoke from those steps during the 1964 Free Speech Movement. A small marker on the concrete commemorates Savio who likened society as a machine and called on listeners to "put your bodies upon the gears."

Mario Savio on Sproul Hall steps at UC Berkeley in 1966 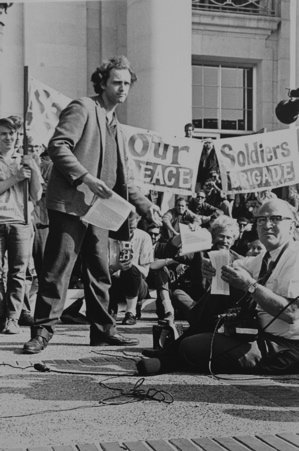 At the age of twenty-four, Stokely Carmichael walked out a Mississippi prison in 1966 and told a crowd of supporters “We want Black Power!” This phrase would come to mean many things to different people, from African Americans who recognized the need for autonomy and power to those who opposed racial equality and saw Carmichael as a direct threat.

By the time Carmichael gave his famous speech on the Berkeley campus at the SDS-sponsored Black Power Conference in October 1966, he had already been arrested twenty-seven times for participating in sit-ins and other protests in the South. While he supported non-violent protest, his own personal accounts and experiences of injustice convinced him that radical change was needed to reform the political system of the United States.

Carmichael was put under FBI surveillance after his speeches in Detroit and California urging African Americans to refuse military induction in protest of the Vietnam War. In New York City on April 15, 1967, Carmichael gave a speech connecting Black Power to the war in Vietnam and linked poverty to racial oppression.