Sand Fork High/ Elementary School served students from the southern portion of Gilmer County, West Virginia for many decades. The school was known for its prominent location within the community as it was located at the top of a large hill overlooking a vast area of land within Sand Fork. The school was the home of the Lions for decades before the school finally closed its doors in 2016 in the wake of the county's school consolidation plan. The school is now home to a local restaurant, School House Café, which is owned by Bobbi and Scotty Nicholson. The café is part of Thomas Center, which is a non-profit organization. All proceeds from the café stay within the center, which allows the organization the ability to give to youth sports teams and the community.

This building was a main component of Sand Fork High and Elementary School. Both the high and elementary school featured other buildings not featured in this picture. 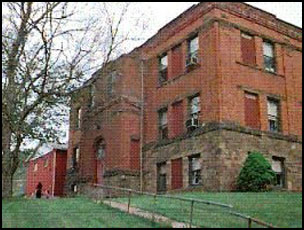 This is a sketch of the main school building. 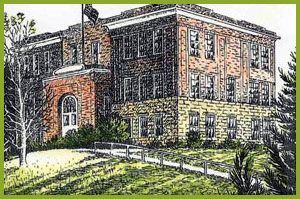 —- The smallest Sand Fork High School graduating class was the 1924 class of four members; the largest was the 32-member class of 1966.

—- The school song, which begins “Proudly stands our schoolhouse on the hill”, was written by Mr. Roland Butcher. Mr. Walker Bailey, ’40, wrote the school hymn, “Look for the Right.”

—- The evergreen shrubbery near the front south corner of the high school building was a gift to the school from Mr. Ford Lowe, ’35, owner of Lowe’s Nursery in Parkersburg.