After spending 41 years in Gregorytown, Texas, the congregation in 1922 moved to it current site in East Austin, with the larger chapel having been built during the 1950s. East Austin grew as an African American community mostly be design (tied to segregation). As such, the Simpson Methodist fellowship has not only served as a popular church, but also played a significant role in the development of Austin's black community for more than a century, serving as a center for politics, social activism, and education.

Classical Facade of Simpson Memorial Methodist Church, which dates from 1952. 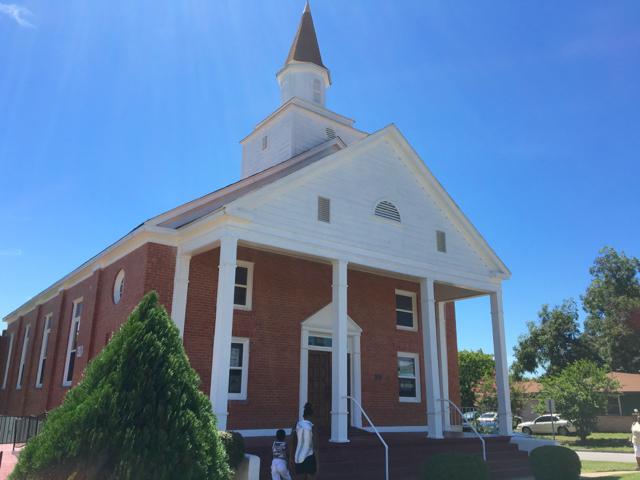 Simpson Memorial Methodist Church (now known as Simpson United Methodist Church) is a mainly African American church located in the historically segregated neighborhood of East Austin. Though the congregation dates from 1880, the historic church building opened its doors with a small tabernacle in the 1920s and then a much larger facility in 1952. The church proved significant and influential during the height of the civil rights movement, both nationally and locally.  In short, Simpson Memorial functioned more than solely as a church; it served the local African American community socially, educationally, and politically.
East Austin originally lay outside the city limits, but a population boom after the Civil War coupled with the arrival of the railroad in East Austin precipitated its addition to Austin. European immigration largely dominated East Austin's original demographic makeup from the 1870s through the early twentieth century, comprised of Swedes, Germans, Italians, African Americans, and Hispanics settled mostly in ethnic enclaves.
However, by the 1920s, the East Austin demographic composition changed mainly due to a practice of "redlining," a common real-estate strategy conducted by city officials throughout the country that segregated African Americans. As African American populations skyrocketed in distinct portions of urban communities, whites commonly fled -- referred to as white flight -- those communities. As a result, redlining resulted in the almost complete segregation of African Americans, which in Austin occurred in East Austin. In fact, an Austin city plan arose in 1927 that made segregation an official policy so that by the 1930s, parks, libraries and public schools intended for African Americans were relocated to the east side of Austin. As well, African Americans in Austin were denied access to those same facilities in "white" portions of the city and were not allowed to buy property most other Austin neighborhoods. The resulting segregation helped produce a notable, urban African American culture, and churches were often a significant part of that trend including the Simpson Memorial Methodist Church in East Austin.
The history of Simpson dates back to 1880 when Simpson Mission Methodist Episcopal Church was founded in the mostly African American Gregorytown community, established by freedmen shortly after Emancipation.  The church, which operated in Gregorytown for 41 years, owes its name to  Bishop Matthew Simpson, a pioneer Methodist leader who also actively participated in politics and abolition campaigns.  The church moved to East Austin in 1921, but did not enjoy the use of a permanent structure, so they worshiped under a tent until construction of a permanent tabernacle took place one year later.
Many ex-slaves and their families helped build the new church (finished in 1925) with most of the work occurring at night without blueprints and in poor lighting. The project came to be known as the tabernacle basement because it sank about three feet below grade, and it remains in place today and functions as the church's Fellowship Hall.  The new structure helped the church gain increased membership -- more than 500 by 1926, eventually growing to become a centerpiece of East Austin's religious, cultural, educational, and political life.  As it grew, an even larger building proved necessary, which manifest itself in the form of the historic church that now stands in East Austin.
Architects used the original "basement tabernacle" as a foundation for which to build the new church, a process that began in 1952. It's completion occurred just as the civil rights movements gained momentum in Austin and the nation.  The new Simpson building included spacious rooms that operated as classrooms and meeting halls, thus offering the community a safe space for which to conduct political and activist-spirited meetings. (The Austin branch of the NAACP held regular meetings at the church.)  As well, The Voting Rights Act of 1965 sought to overcome laws that prevented African Americans from practicing their right to vote, and the church served as a hall for which bidding African American politicians came to speak.
In the end, the church stands as a monument both to the population rise of Austin after the Civil War, and the plans that help segregate African Americans to East Austin. Though a vibrant African American culture emerged, with churches like Simpson Memorial -- built in part by former slaves --- serving as a centerpiece, it also spoke to the challenges African Americans faced in that era (and still do, one can argue).  The church offered a place for the community to educate their youth and to assemble for matters of both faith and politics, including organizing grassroots movements attached to gaining civil rights for minorities.