Once the administrative headquarters of brewing giant Blatz, this building is one of the only remaining Milwaukee examples of the late Romanesque Revival architectural style. The original section of the building was erected in 1890, with additional structures constructed on the property in 1920 and 1945. The architect for the 1890 section, a two-story building with attic, was Herman Paul Schnetzky who also designed other significant German-style structures including the Standard Paper Co. (1914), and the Manufacturers' Home Building (1909). Today the building makes up part of the Milwaukee School of Engineering campus. 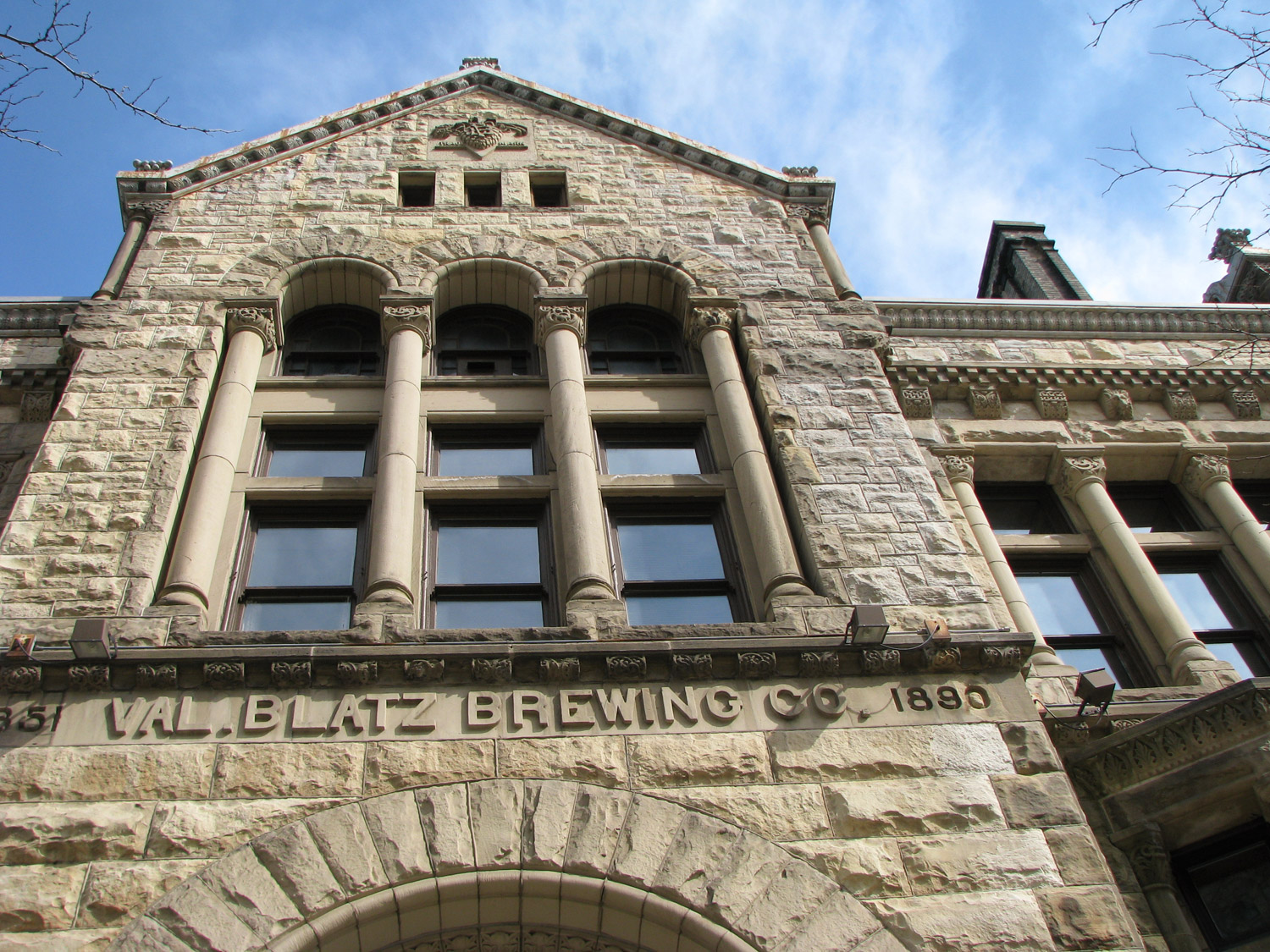 The Blatz office building in 1983, when it was named to the National Register of Historic Places. Photo credit: Wisconsin Historical Society 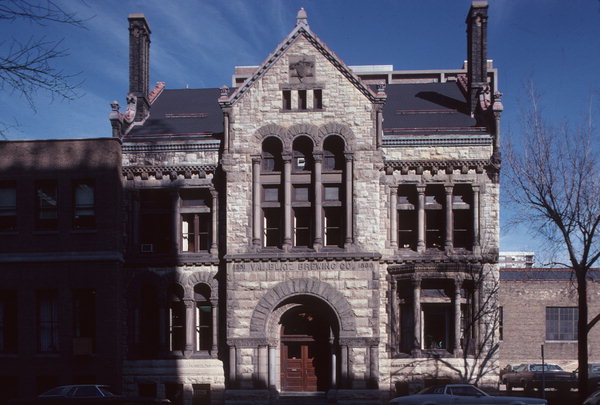 Side angle of the building in 1983. Photo credit: Wisconsin Historical Society 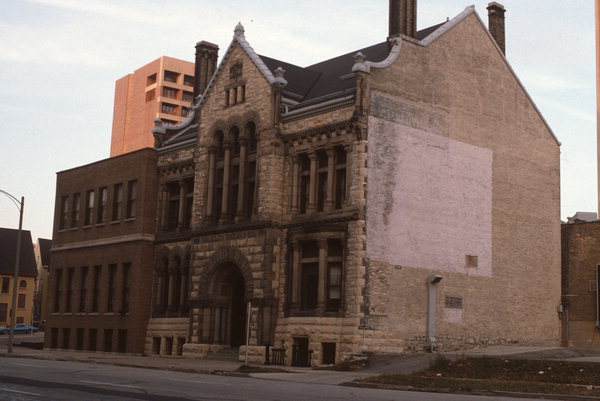 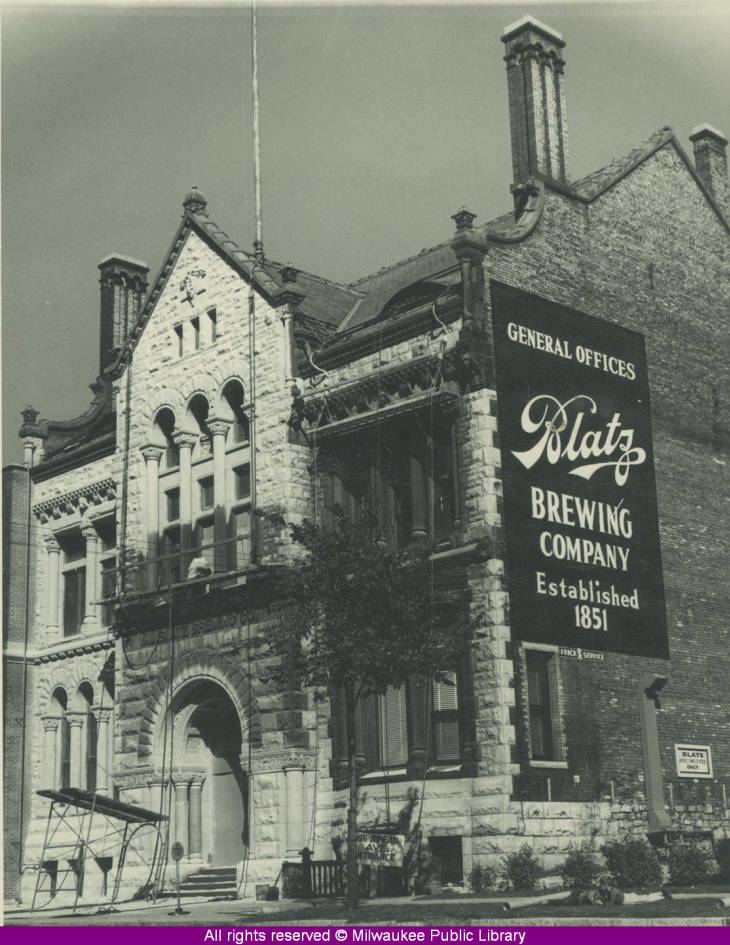 In 1890 the Blatz brewing company was in full swing. Valentin Blatz had brought the brewery from humble beginnings to a major operation, which included the first Milwaukee bottling center for national, and later international, distribution. By 1880 production was up to more than 125,000 barrels a year. It was at this high point that the aging Valentin Blatz sold his company to a group of English investors while maintaining his role as President until his death the following year. His son took over the presidency in 1891.
The office building created during this period of change in the brewery's leadership was consistent with other parts of the brewery in exemplifying a heavily German-influenced style. Architect Herman Paul Schnetzky chose the late Romanesque Revival architectural design, incorporating both local cream city brick and a facade using Wauwatosa limestone. The main entrance has a gabled roof and an arched doorway with long windows in between. A frieze carved with "1851 - Val. Blatz Brewing Co. - 1890" also marks the entrance.
Inside the building is a wide entrance hall with a large staircase leading to the upper floor, and brass light fixtures on the walls. The hall is decorated with dark oak wainscotting. The arched doorway leads to the main salon, which is decorated with two nine-light brass chandeliers hanging from a skylight.
In 1920 an addition was constructed in red brick to expand office space, but the one-story building was intended to be more functional than architecturally significant and does not match the 1890 original building. A second story was added to the red brick addition in 1945.
When Blatz was acquired by Pabst in 1958, the new owners occupied the building for their own offices until the early 1980s. It was then renovated and became the Beer Baron restaurant for five years. In 1989 the building was purchased by the Milwaukee School of Engineering (MSOE), becoming its Alumni Partnership Center and the offices for Development and Alumni Affairs. According to MSOE, "Great care has been taken to preserve the unique features of this building, which include hand-carved fireplace mantels, hardwood floors and oak beams."1 Other tenants have included the Goethe House, a Non-Profit German-American Cultural Institute serving Wisconsin since 1958 before they recently relocated to Wauwatosa.