A portion of the Big Creek Hydroelectric System East-West Transmission Line intersects State Route 138 near the Southern California Edison Bailey Substation. The Big Creek Transmission Line is a primary component of a hydroelectric system where electricity is generated using water flow to power turbines to power generators. The resulting hydroelectric system is a significant assemblage of interconnected electric transmission towers and lines, water tunnels, reservoirs, diversion dams and power plants that originates in the upper San Joaquin River watershed and terminated in the Los Angeles and Long Beach areas. The state of California was an advocate and an early developer of long distance power transmission generated by those harnessed watersheds. The complex system was conceived by and is owned by Southern California Edison (SCE), an electric and natural gas utility. Its forerunner, Pacific Light and Power was established in 1908 by financier Henry Huntington with John S. Eastwood as the engineer. 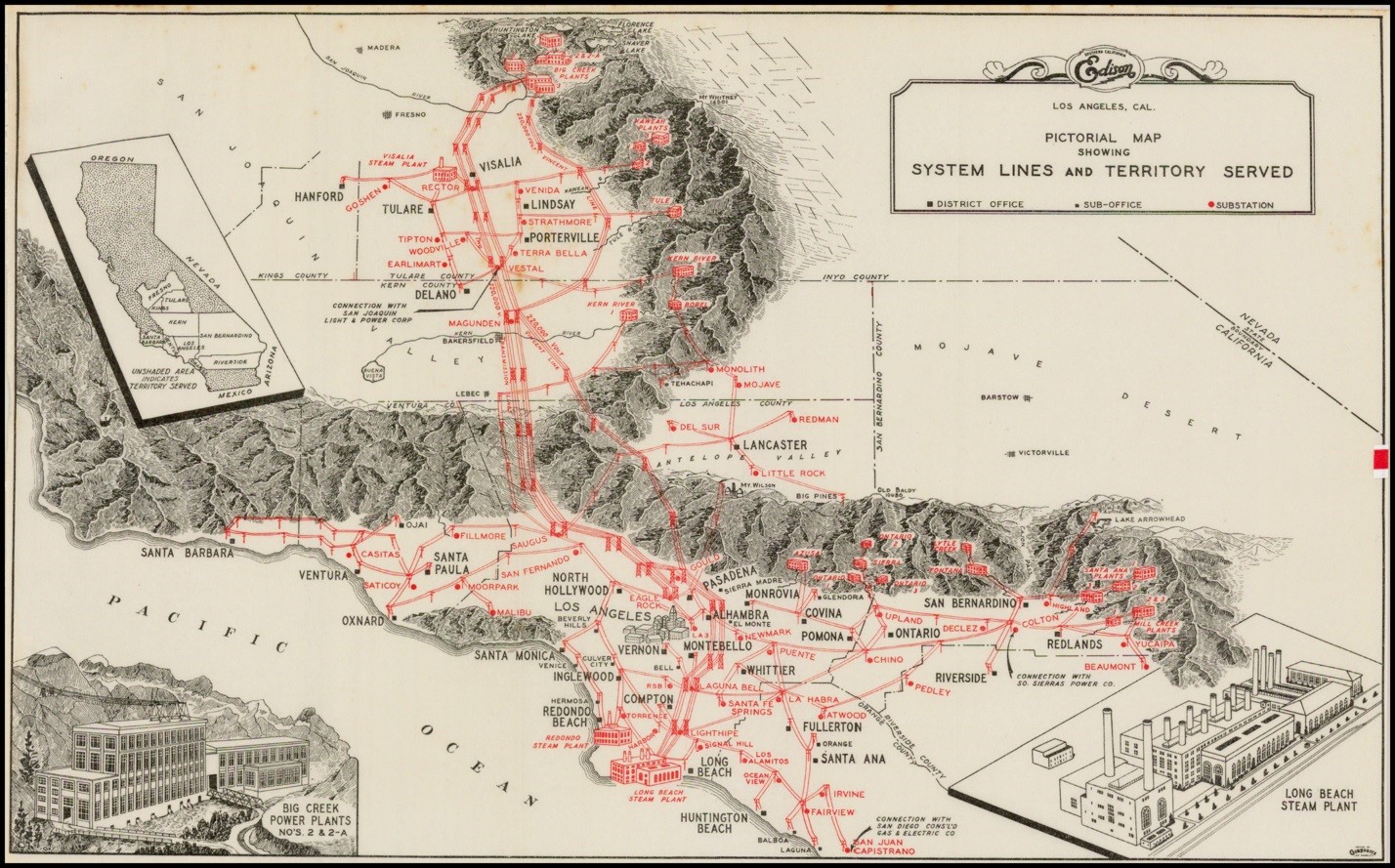 The construction of this transmission line commenced in 1913 connecting the Big Creek Hydroelectric System in the Sierra Nevada National Forest with the Eagle Rock Substation in Los Angeles.  The 241-mile transmission line was designed to convey electricity from the powerhouses at Big Creek, the entire distance to Los Angeles for distribution to various Southern California Edison service territories.  The system began service over the decade after 1913, carrying 150 kilovolts (kV, one kV is 1,000 volts of electrical power) and upgraded to 220 kV in 1923.  This linear resource was the primary line transmitting electricity to the Los Angeles region and its individual modern-day segments are contributing elements to the Big Creek Hydroelectric System Historic District.  The historic transmission line is substantially intact along the entire 241-mile length, and although modifications have occurred in the past century, these changes have not diminished the integrity of the linear resource, or the ability to convey its significance.

The Big Creek Hydroelectric System East-West Transmission Line was determined eligible for listing in the National Register of Historic Places at the state and national levels of significance for its association with the rise in regional suburban development, for its direct connection with persons important in our past and for its complex hydroelectric engineering system.  Its period of significance began in 1911 when building commenced and ended in 1929.

The larger, Big Creek Transmission Line Historic District is significant for its contribution to the events that included construction and operation of the large, complex, and interrelated power system which partially enabled development of the Los Angeles metropolitan area.  The Big Creek Transmission Line is also important for its direct association with the achievements of its principal designer, John S. Eastwood (1857-1924), with Henry E. Huntington (1850-1927), who initially funded the enormous project and Edison president, George C. Ward (1863-1933). The Big Creek Transmission Line Historic District is noteworthy for its engineering as an early illustration of a hydroelectric system and because it retains the construction materials, workmanship and design of the innovative system.

Character-defining features of this transmission line are its linear corridor and the steel lattice towers.  The shape of the tower narrows at the connections of the pylon body and pylon tops,” so this form is called a waist tower type.  Their odd shapes are entirely practical Each tower is steel construction set on concrete bases or “stubs.”  Each tower has a single beam atop the upper cage or “K fork” which support phase conductors or insulators on each side.  Inside of the forks there are conductor bundles.  Single sets of cross arms make each a single circuit system.  The insulators each support paired conductor wires.  One set of electrical grounding wires are strung on either side across the peaks of each tower.  Non-contributing elements include the conductor wire and insulators, which are routinely repaired and replaced.  The Big Creek East-West Transmission Line is a contributor to the larger Big Creek Hydroelectric System Historic District which was determined eligible for listing in the National Register.