Brooklyn’s Erasmus Hall has the distinction of being one of the oldest secondary schools in the United States. The school began in 1786 with funding from Alexander Hamilton, John Jay, Aaron Burr, and Robert Livingston. In 1896, became the property of the city and was used as a public school. Gradually, a larger campus grew up around the original building, which sat empty for a time after Erasmus Hall High School closed in the 1990s. The original building is a New York City Landmark and is also listed on the National Register of Historic Places. 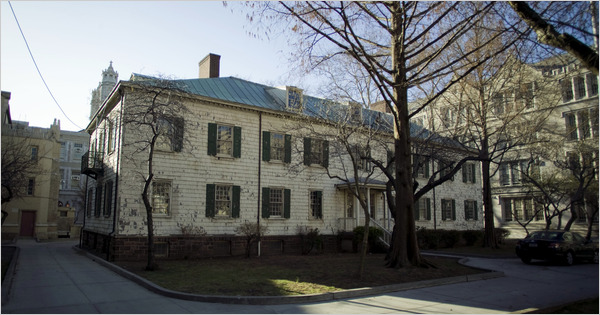 Part of the later, Gothic additions 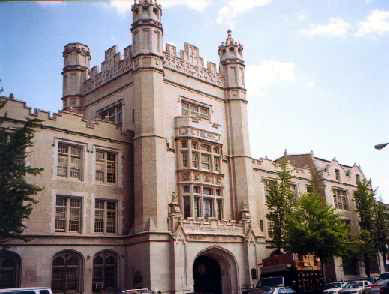 There are few schools in the United States that can claim to predate the signing of the Constitution. But Erasmus Hall Academy in Brooklyn traces its history back to 1786. Not only does the school have a long history, it also has a distinguished one. Among the men who provided funding to found the school were a number of the Founding Fathers: Alexander Hamilton, Chief Justice John Jay, Aaron Burr, and Robert Livingston.

The school, which began as a private school for young men, is the oldest secondary school in the state of New York. The first students at Erasmus Hall lived in the building in addition to attending classes there. The school began to admit girls in 1801. Until well into the twentieth century, Erasmus was one of the country’s most prestigious secondary schools.

Though the building was added to the National Register of Historic Places in 1976 and was named a city landmark in 1966, it fell into neglect and was in danger of being condemned or demolished after the school’s closure in 1994. The public rallied to save the building, however, and enough funds were raised to repair the damage. Currently, the campus, now known as Erasmus Hall Educational Campus, has reopened and is home to five separate small schools. The fate of the original building is uncertain, although a number of people would like to see it restored and to see its history promoted.

Erasmus Hall produced a number of acclaimed graduates over the years, including Clive Davis, Barbra Streisand, Eli Wallach and Mae West, among many others.

Start in downtown Flatbush on Flatbush Ave. and walk through over 200 years of history, from a reborn theater to the former Town Hall, Erasmus Academy, and Reformed Church. Next, walk west to the Prospect Park South Historic District, a mainly residential subdivision from the early 20th century. Last, head south to a similar subdivision in Flatbush, the Ditmas Park Historic District, west of Ocean Avenue.