Brooklyn's Sunset Park neighborhood was transformed in the first half of the twentieth century by large numbers of Finnish immigrants who settled in the area. Unlike immigrants of other nationalities in different parts of the city, who often rented tenements, a number of Finnish families established a housing cooperative. The cooperative built two buildings, Alku ("beginning") and Alku Toinen (Alku II) in 1916. The buildings, which are listed on the National Register off Historic Places, were the first purpose-built housing cooperatives in the state. 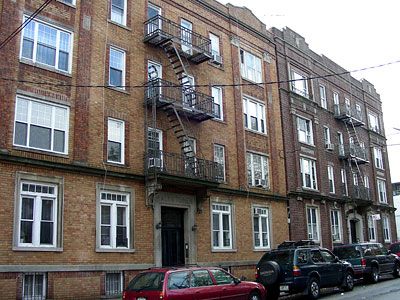 Close-up of the entry way 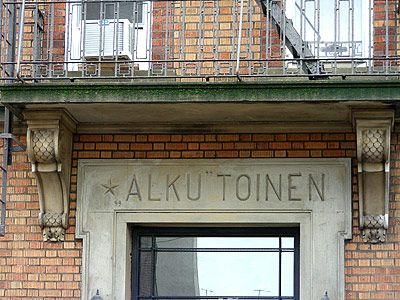 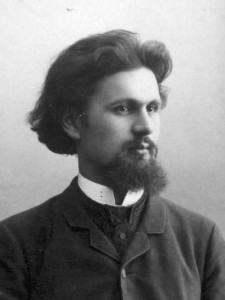 It could be argued that no American city was transformed by waves of European immigrants in the late 1800s and early 1900s to the degree that New York City was. For many of those new arrivals, their first glimpse of the United States was Ellis Island, and many of them stayed in the city to make new lives. Although it is little remembered now, Brooklyn's Sunset Park became a Finnish enclave during those years. There are still traces of the residents who once called Brooklyn's Finntown home, among them the buildings at 816 and 826 43rd Street.

Anyone who is familiar with the photographs of Lewis Hine or who has seen the film Hester Street is familiar with the living conditions of many turn-of-the-century arrivals to the city. More often than not, they settled in overcrowded tenements where poverty and sickness were pervasive.

But the Finns who found their way to Sunset Park brought different notions with them. By the early 1900s, Finntown was a something of a hotbed of Socialist thought, at least some of it inspired by the Finnish newspaper editor Matti Kurikka. In Finntown, Kurikka founded the Finnish language newspaper  New Yorkin Uutiset. Kurikka was also known his Utopian ideas, including the idea of co-operative living.

An initial group of six families contributed $500 each (a princely sum at the time) and borrowed the rest to build Alku, or "new beginning" in 1916. A second co-operative--Alku Toinen, was built the following year. The concept of nonprofit co-operative housing was such a new idea at the time that New York had no laws to regulate them. Co-ops may be ubiquitous in the city today, but they were a novelty in 1916. The two buildings are believed to be the first co-ops in the city, and perhaps the country as a whole.

Not only was the idea innovative, but the buildings themselves were a revelation. Most working-class immigrants were crowded into tenements that lacked even rudimentary sanitation, but the Finnish co-operatives had five rooms each, hot water, showers, and wide windows that flooded the buildings with natural light. The notion that these buildings could be owned by working-class families themselves was so shocking that even the New York Times appeared dumbfounded at the prospect, but conceded that "seeing is believing."

The idea of co-operative living soon caught on, and within a decade, Sunset Park was home to almost 30 co-ops, all of them Finnish-owned. The neighborhood's Finns also applied the co-operative model to other businesses, such as grocery stores and restaurants.

Finntown and its cooperatives flourished until the mid-twentieth century. At that point, there were few new Finnish immigrants coming in, and many of the younger Finns in the neighborhood were leaving. Like New York City as a whole, Sunset Park declined and what was once a Finnish enclave became increasingly a neighborhood of Chinese and Puerto Rican immigrants.

Though some of the Finnish-owned buildings have been sold over the years, others are still nonprofit co-ops. The first two buildings, Alku and Alku Toinen, are listed on the National Register of Historic Places.