This A-7B Corsair II, Bu No. 154479, was built in Grand Prairie, Texas by Chance Vought in 1968. The Vought A-7 Corsair II was developed in the early 1960s as a carrier-capable subsonic light attack aircraft intended to replace the Douglas A-4 Skyhawk. The A-7 airframe was based on the successful Vought F-8 Crusader. It was one of the first combat aircraft to feature a heads-up display (HUD), an inertial navigation system (INS), and a turbofan engine. Vought Aircraft of Dallas received a contract for the first batch A-7s in 1964. The aircraft was named “Corsair II” after Vought’s famous F4U Corsair of World War II. The World War II-era fighter was actually aircraft to have the name — the first was the O2U Corsair biplane from the 1920s. The A-7 made its first flight in September 1965 with the Navy receiving its first operational aircraft in 1966. Navy Attack Squadron ONE FOUR SEVEN, VA-147, “Argonauts” was the first to operate the A-7 in 1967. By the end of the year, the aircraft was flying over Vietnam. The 35,000 Vought employees in Dallas turned out one aircraft a day for several years. The aircraft was also adopted by the United States Air Force and the Air National Guard to replace the Douglas A-1 Skyraider, North American F-100 Super Sabre, and Republic F-105 Thunderchief. Almost 1,600 aircraft were built in 15 different models. The last US A-7 was retired in 1989. 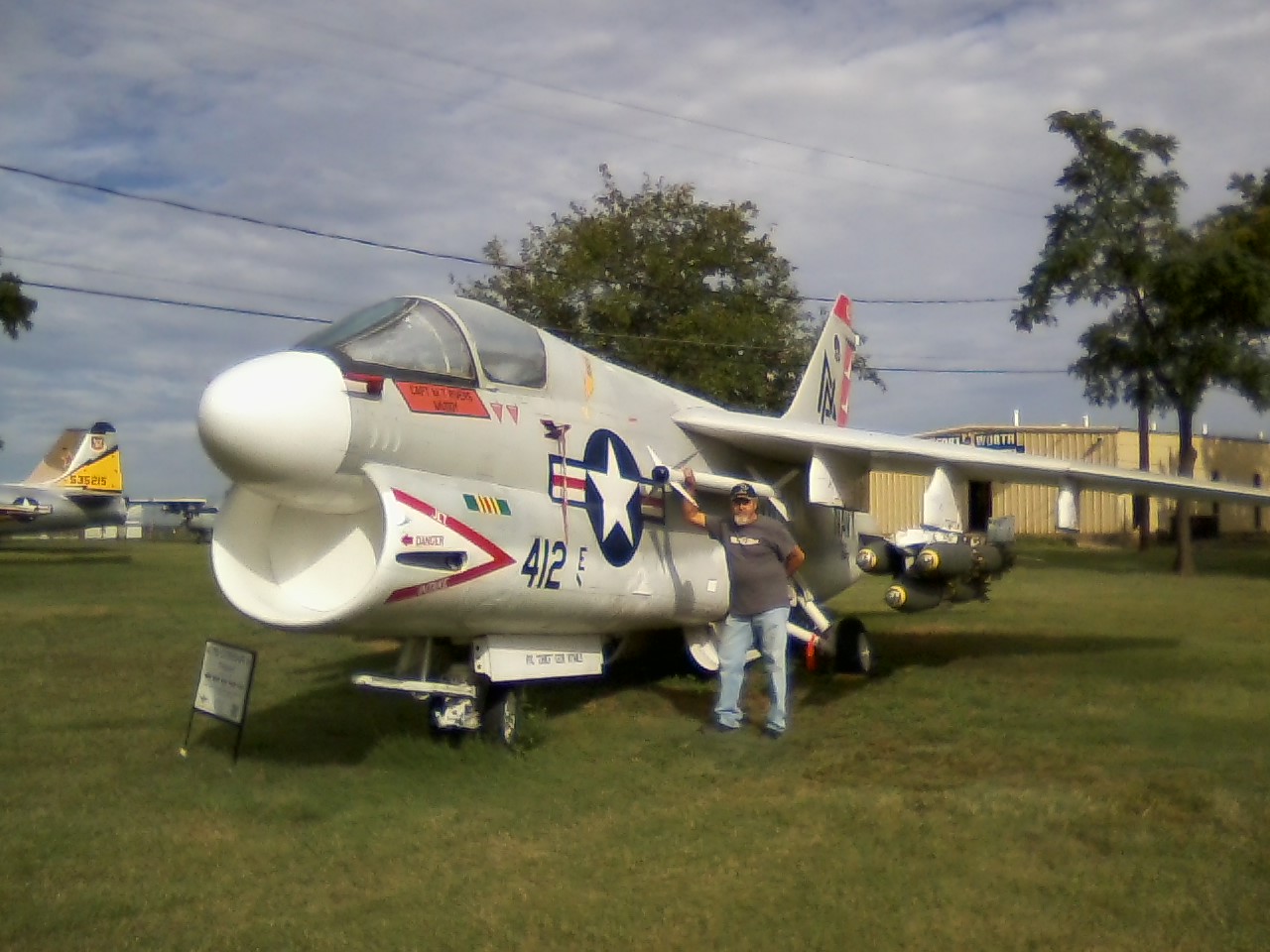 From the logbook and memories of Craig “Spike” Taylor who flew this A-7:

I had flown that particular aircraft. You prompted me to check my logbook, and these are the dates and missions that I flew the aircraft. Our logbooks were maintained by a clerk, so I cannot attest the accuracy.

1969 Date, Hours, Flying From, Mission (to the best of my recollection)

As I recall, the airplane became a “Hanger Queen” serving as a parts donor during April, May and June, when parts shortages were acute. This probably could be verified through the VA-25 maintenance records, or the aircraft logbooks if they are available.

July 15, 2.2 hours, CVA-14, Combat – Laos with FAC (I believe that it was on this hop that I chased a yellow bulldozer away from road reconstruction at least twice! (Probably it was made in Peoria IL and shipped to North Vietnam in an English freighter…). I do not think that I got any direct hits, but I slowed him down a bit with pairs of 500# bombs!

July 23, 1.8 hours, CVA-14, Night Combat – probably in Laos. During this time we were triple-cycling (3 back to back flights day and night: 2 hour brief, 2 hour flight, 2 hour debrief for a total of 18 hours a day). I dozed off in the cockpit going feet wet, and felt the shadow of Ross Underhill’s aircraft pass over me. It was a huge adrenalin shot! At 0300 I got an OK-3 pass, and needed an extra shot of medicinal alcohol from the flight surgeon.

July 24, 2.3 hours, CVA-14, From the length of the flight, this should be the flight that I went out as a spare with our sister squadron, VA-86. At the target in Laos the division leader set up a racetrack pattern (we always made our runs from separate directions to make the bad guys firing solutions difficult). After my second pass and pulling up to the racetrack pattern, a number of tracers (37mm or 57mm) came up in the direction I was flying. I rolled inverted, and pulled down about 2000 feet. Rolling upright I saw the flash of the AAC shells going off right where I would have been. I had no gun control radar warnings, and we were flying lights out. I can only surmise that they were tracking us aurally! The NVA were good!

I wish that I had kept a diary, so that I could give specific mission data. I hope that this helps. Of course, we were not assigned a specific aircraft, but flew whatever aircraft Maintenance could provide for us. We returned from cruise in late September. I flew the aircraft several times at Lemoore before transitioning to the A-7E.

It is possible that BuAer # 154479 did sustain some damage. If the logbooks show damage to the radome and radar, it is possible that it was the aircraft that encountered a 20mm dummy (blue) round, which struck the radome and radar during a dive bomb run. As I recall the round impacted the radome sideways, as though it was spent and was falling. It did inflict quite a bit of damage. In addition, the round showed no rifling. Our spook at the time surmised that it was possible that the NVA salvaged a MK 12 cannon from a downed aircraft and made their own smoothbore barrel. This may also be the reason that the aircraft was out of service for so long. But why was the round a blue dummy?

Courtesy of the FIST OF THE FLEET ASSOCIATION: http://www.fistofthefleet.org

Our Vought A-7B-3-CV Corsair II, Navy Bureau of Aeronautics No. 154479, c/n B-119, was built in 1968 in Dallas or Grand Prairie, Texas. The Navy accepted the aircraft on August 21, 1968.In October 1968, the A-7 was assigned to Attack Squadron ONE TWENTY TWO, VA-122, “Flying Eagles” at NAS LeMoore, California. The unit was also known as “Corsair College.” It carried tail code “NJ” and the aircraft number “_(researching)_”. This unit was a fleet replacement squadron.

The aircraft then served with Navy Attack Squadron TWENTY FIVE, VA-25, “Fists of the Fleet”, beginning in October 1968. It carried the tail code “AH” and was numbered “503.” The squadron made three deployments to Vietnam.

The first deployment was from February 1, 1969, until September 18, 1969, on the USS Ticonderoga to Western Pacific/Vietnam.

The third deployment was also aboard the USS Ranger from November 16, 1972, until June 23, 1973, to Western Pacific/Vietnam.