Built as part of West Virginia University’s expansion in the early twentieth century to house the College of Agriculture, Oglebay Hall remains one of the most prominent structures on WVU’s downtown campus. University officials named the hall for Wheeling industrialist and philanthropist Earl W. Oglebay, a WVU regent at the time. Similar to the calculations made by university officials today, WVU administrators hoped that Oglebay might be sufficiently honored by the building's moniker that he would make a substantial contribution to its construction. While such hopes were never realized, the building’s construction was completed in 1918 and the College of Agriculture moved to their new home shortly thereafter. The College of Agriculture moved to the new Evansdale Campus in 1961 and the university’s psychology department moved to this building until 2002 with the construction of the new Life Sciences Building. The site is notable for its association with Dean of Agriculture Henry G. Knight (who went on to head the U.S. Department of Agriculture’s Bureau of Chemistry and Soils), the Psychology Department’s Life Span Developmental Psychology Program (the first of its kind in the country), and as the location of student protests against the Vietnam War in 1970. The building received considerable upgrades and renovations in 2007, becoming the first LEED-certified (Leadership in Energy and Environmental Design) building in the state. It is currently the home of the Department of Forensic and Investigative Science and is open during regular university hours. 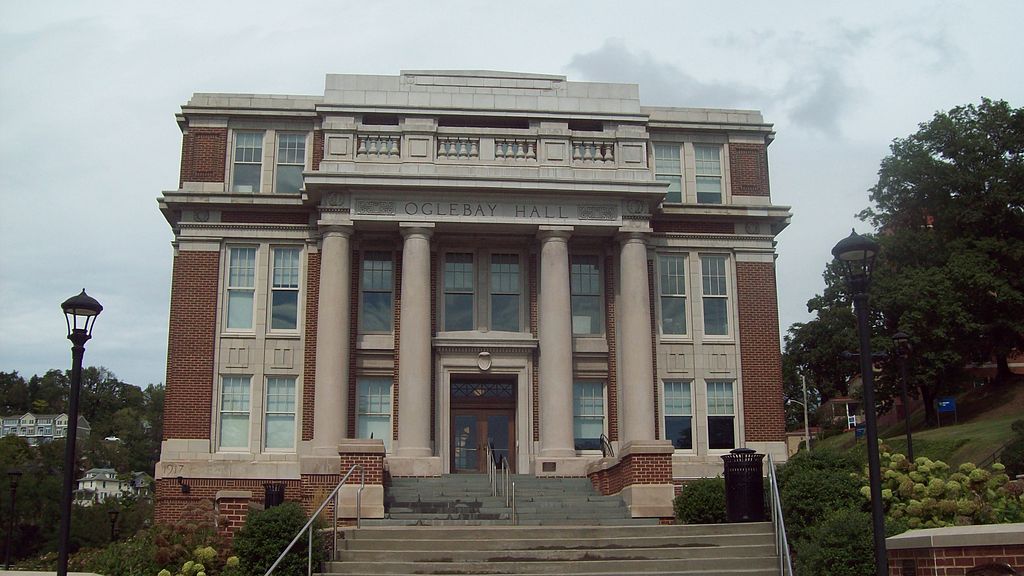 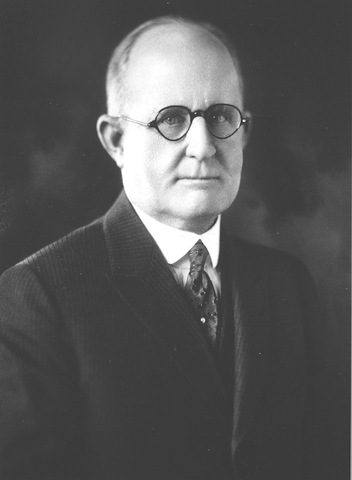 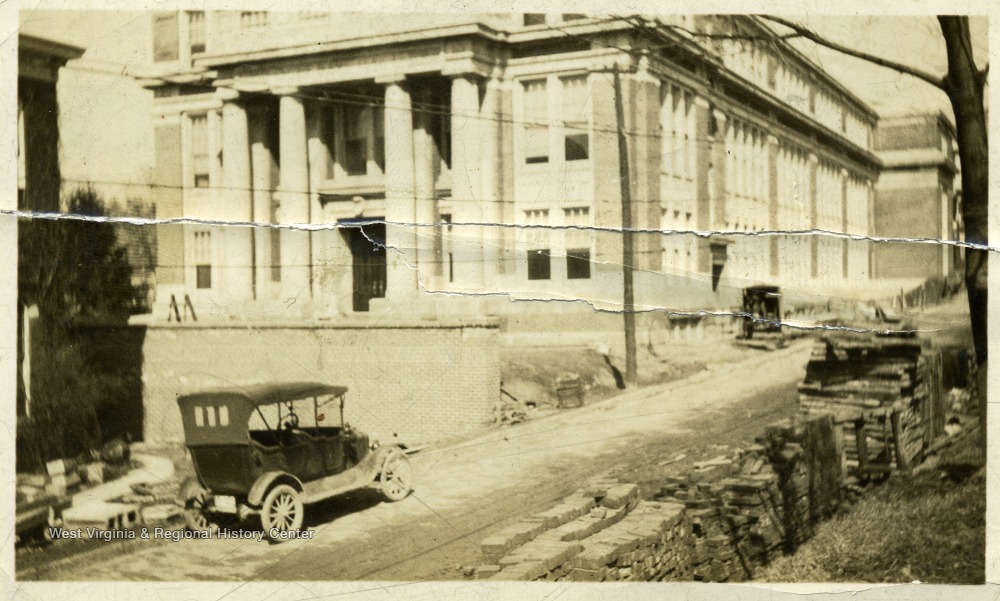 Plant pathology room in Oglebay Hall, some time between 1920 and 1930. The building originally housed WVU's College of Agriculture. Courtesy of the West Virginia & Regional History Center. 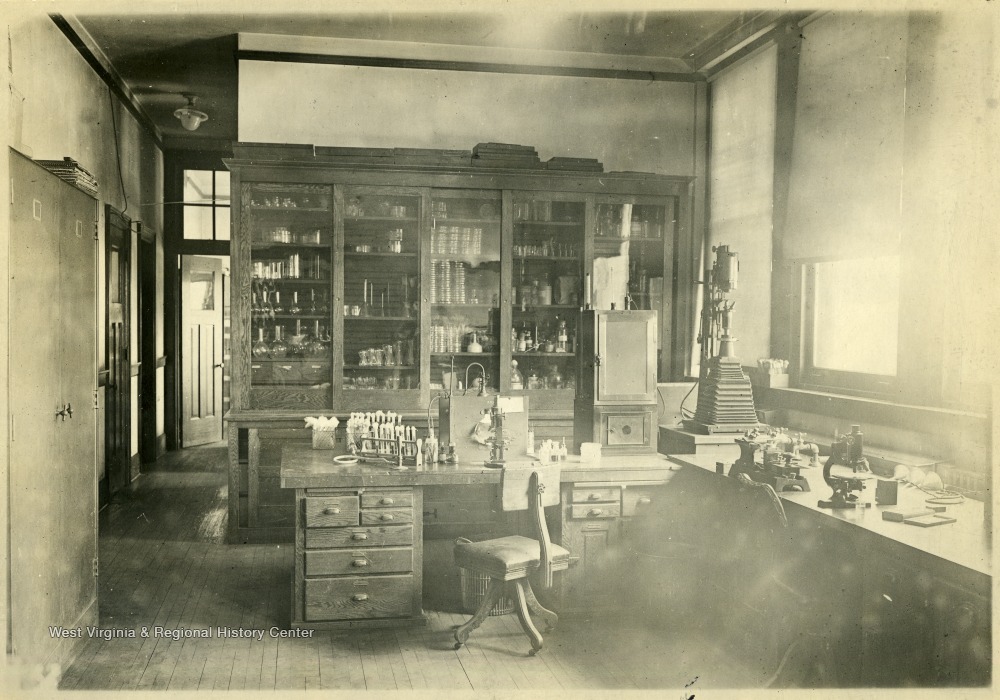 Beginning in the early twentieth century, WVU pursued an aggressive expansion of what was then its only campus under the administrations of university presidents Daniel Boardman Purinton, Thomas Edward Hodges, and Frank Butler Trotter. It was during the administration of the last that construction began and was completed on what became Oglebay Hall. The building, which sits on a slight rise overlooking the middle of what is now the downtown campus and the university bookstore, is in the Neo-Classical Revival style. The four large Doric columns to the structure’s front are particularly representative of this style, as are its pediment (triangular upper part of the building) and prominent pilasters (rectangular columns). While such features have made the structure a particularly noteworthy sight on campus, however, they were evidently not enough to impress the hall’s namesake Earl W. Oglebay. University officials had hoped by naming the building after Oglebay, a member of WVU’s Board of Regents, he might donate toward the financial outlay of the hall’s construction. Oglebay, who made his fortune in the banking and iron industries, had already contributed significant funds to his hometown of Wheeling, West Virginia and his nearby alma mater Bethany College. WVU’s leadership believed he might do the same at their own school in Morgantown. The new building’s name was still topical despite the lack of financial support from its namesake as Oglebay was the founder of West Virginia’s first agricultural education program at Waddington Farm (now Wheeling’s Oglebay Park). With this legacy to guide it, the College of Agriculture took up occupancy at Oglebay Hall shortly after its construction in 1918.

From that date until its renovation in the early twenty-first century, Oglebay Hall has enjoyed a number of connections to prominent figures and events from university, local, and national history. The College of Agriculture’s dean during its first years at Oglebay, Henry G. Knight, went on to lead the U.S. Department of Agriculture’s Bureau of Chemistry and Soils in the 1920s and 1930s. During his time there, Knight oversaw a number of notable developments in the history of the agricultural sciences. In his first year as head of the bureau, Knight appointed Hugh Hammond Bennett to lead a nationwide study of soil erosion. His timing could not have been better. Two years later a summer-long drought precipitated the conditions that led to the Dust Bowl in the Great Plains, a devastating natural disaster that left countless American farmers unable to sustain their livelihoods. The USDA (and Knight as the head of the Bureau of Chemistry and Soils) was at the forefront of the government’s response to the crisis, promoting anti-erosion strategies that Bennett developed both during his time under Knight’s supervision until 1935 and as head of the new Soil Conservation Service from that year onwards. Knight also founded the USDA’s first chemical research laboratories and oversaw the development of phenothiazine as an insecticide (a chemical compound that scientists have also found useful as a treatment for urinary tract infections, intestinal parasites, and psychotic disorders).

While Knight rose in prominence at the USDA, WVU’s College of Agriculture continued to serve as the primary source of agriculture development and education in the state of West Virginia. From its move to Oglebay Hall in 1918 to its departure from the building in 1961, it operated agricultural classes and laboratories at the site, as well as the department of home economics and the WVU Dairy (where students could purchase homemade ice cream until the building’s renovations in 2007). After the College of Agriculture moved to the new Evansdale Campus the building became the new home of the university’s Department of Psychology, which remained there until 2002. It is during this period that the psychology department first began its doctoral program, which included the Life Span Developmental Psychology Program. The study of developmental psychology was in its infancy at the time and WVU’s program was the first in the nation. As a result of the work produced through the developmental psychology program and in other areas of the field, the department has received numerous awards and consistently earns high rankings as a purveyor of graduate education.

Oglebay Hall was also the site of student protests against the Vietnam War in 1970. On April 20 of that year, U.S. President Richard Nixon announced the withdrawal of 150,000 troops from South Vietnam, a decision that many considered a move towards a de-escalation of American involvement in the conflict. Two days later, however, he authorized a South Vietnamese incursion into neighboring Cambodia and the U.S. operation into the same country soon afterward. Many in the United States considered this an expansion of the war that directly conflicted with Nixon’s campaign promise to do everything in his power to end it. The result was widespread protests against the Cambodian campaign.

While much of the public’s attention focused on the 100,000 students that protested on the Washington Mall and the four students that died at the hands of the Ohio National Guard during protests at Kent State, WVU also stood witness to student protests against the campaign. These protests, the outgrowth of cooperation between community organizations in Morgantown and student groups at the university took place in front of Oglebay Hall. While the protests were predominantly peaceful Morgantown’s police force did not consider them as such, and ultimately dispersed them with the use of tear gas. In doing so, they connected the anti-war movement in Morgantown (and Oglebay Hall itself) to a nationwide struggle against a conflict that had already claimed thousands of lives.

Since the 1970s Oglebay Hall has enjoyed a relatively uneventful existence. When the university renovated the structure in 2007, it became the first building in the state to receive certification from the Leadership in Energy and Environmental Design initiative, a metric created by the U.S. Green Building Council that stands as the most widely used current gauge for a structure’s environmental sustainability. Oglebay currently houses WVU’s Department of Forensic and Investigative Science.