According to the earliest records available, the Mount Barrien Primitive Baptist Church in Orange City was organized in 1876 in a small house on Cherokee Avenue.* (FOOTNOTE: The date in which this church was founded has long been understood to be 1880. We believe the WPA records, which were unknown sources prior to this publication, provide new insight into this historic religious organization, including the earlier founding date of 1876.) An A-shaped structure was erected on an adjoining lot and dedicated by this church in 1885. In 1939, WPA researcher Stephen Pollard observed the old meeting hall, noting the structure was unpainted and had a bell. At that time, the Church was reported as a member of the National Primitive Baptist Convention out of Huntsville, Alabama; the General State Convention in Jacksonville; and the East Florida Association District. The first clergyman was Pastor Dick Cruel from 1876 to 1879. In 1922, James Williams served as pastor. Then, in 1924 Rev. R.B. Nichols stepped in as the pastor, and in 1926, the pastor was Rev. M.J. O’Neil. In 1939, the Pastor was G.S. Austin, who joined the church in 1936. 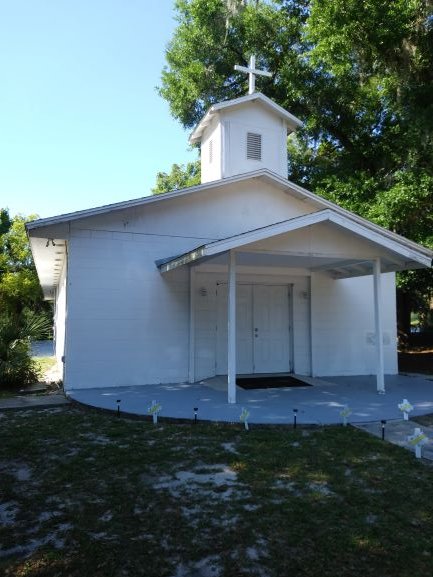 Mr. Pollard found the Church Minutes dated 1936 included two volumes. These minutes recorded church conferences, members, baptisms, burials, expenditures for supplies and equipment, pastor’s salary, election of officers, entertainment, business proceedings, and all financial records. The minutes were in good condition. He found no prior records, indicating all prior records had been lost. He also viewed the Sunday School Records dated 1936 to 1939, which included three volumes. They recorded the organization membership, lessons taught, hymns sang, attendance, offerings, prayers, activities, board meetings and times, and delegates reports.  Existing church records were located in the home of Deacon James Eleby of Orange City whose house was located two blocks from Highway 17. Anthony Tillman believes that these records were transferred to the home of his grandfather, Rev. Lawrence Desaussure, where they were destroyed in a house fire in the 1960s.

Auxiliary organizations of the church included the Women’s Home Missions and the B.J.P.U. No records were kept for these groups, but they expected to start keeping them that year (1939). Mr. Pollard interviewed Deacon James Eleby, and Deacon Henry Tyus, the oldest member, for the church history. The WPA found no written record available for much of the earliest information about the church, relying on Deacon Henry Tyus for the history. The researcher noted that the street, or dirt road, on which the church was located and on which Deacon Eleby lived, had no name and no number. It was simply called “the road around the lake.”

The Mount Barrien Primitive Baptist Church was reported as having origins as a Mission church under the Bishop at Jacksonville, Florida and in 1999, its home office was still in Jacksonville, Florida. Mount Barrien was one of the earliest African-American churches in Orange City, and the chief founders were Henry Harrison and Solomon Hall. Prominent families attended when it was first started, and the church continued to receive support in the 1960s. In 1962, the church added bathrooms to the building. About this time, Deacon James Eleby served as interim pastor. Rev. Godfrey Knight came twice a month to conduct Communion Service with ceremonial washing of the feet of the members.

In about 1967, the church building at 314 East Cherokee Avenue was sold to a Mr. Garland for $600. Garland later sold the building around 1984 to be used as a residence. The new owner, Gary Bauer, repurposed the historic cypress pews into kitchen cabinets and dining room table. He also constructed a second-floor loft and a spiral staircase. When Mr. Bauer acquired the church, the bell tower had been removed. The new owner acquired a vintage stained-glass window from a dealer in Deland to fill the center of the front gable. The former church, the oldest structure built as house of worship in the city, remains a residence today.

The congregation used the $600 received in 1967 toward building a new church on land that Pastor James and Agnes Eleby gave for that purpose on East Blue Springs Avenue just east of Holly Avenue. This new church building became the home of Mount Barrien Primitive Baptist Church.

A permit for construction of a new church was issued on November 13, 1974. The cost of construction was estimated at $12,390. The new building was built in 1975 under the direction of Rev. Godfrey Knight. The church was dedicated February 29, 1976 under the leadership of Rev. Abner Jackson; Deacons I.C. Huff, M.E. Jones, and A.M. Gibson; Trustees F. Frazier, J. Taylor, and S. Stafford; and Secretary Doris Taylor. (Rev. Jackson took the place of Rev. Knight when he retired.)

At the Sunday service on May 15, 1999, the Rev. Jackson, Sister Agnes Phillipe, and the congregation surprised Doris Taylor with special recognition of her 42 years of service as secretary to the church. The entire service was in her honor. Doris speaks of it as being one of her most beautiful memories. Also in May 1999, the church underwent a major renovation. The church constructed an enclosed baptistry, which was a welcome addition. Prior to this, the baptistry pool was located outside behind the church.

Rev. Abner Jackson served until his retirement in 2006. Elder Richard Jones served as interim pastor in 2006, being officially installed in 2007. In 2019, Elder Jones remains as the current pastor with Mrs. Joyce Taylor serving as secretary.