The Ralston Brothers Antique store was originally The Stone House and was built in 1884. The town founders used it for many purposes including a general store, a post office, and a surveyors office. 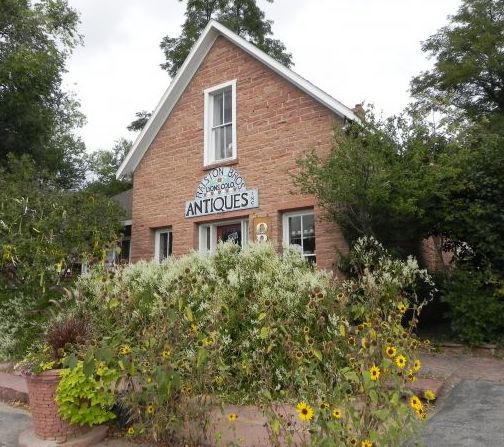 Edward S. Lyon had arrived in the area in 1880 as one of the first permanent settlers. He purchased property from Hiram T. Sawyer in the Red Hill area, now called Lyons. Lyon discovered limestone and red sandstone on his land and joined with Hiram Sawyer and Griffith Evans to form two companies, the Evans Townsite Co. and the Lyons Red Rock and Lime Quarry Co. Shortly after starting his quarry, he traveled back to his hometown of Putnam, Connecticut to search for investors and to bring his family to their new home in Colorado.1 Upon returning, he named the townsite Lyons, though it was not officially incorporated as a town until 1891.

More settlers moved to the area, and the population grew to the point Lyon needed to begin building. He gathered members of the community to build the first major structure out of local sandstone, the 1881 Schoolhouse. In 1884, Edward S. Lyon built the Stone House at 426 High Street. It was a two-story building that served many purposes. Soon after construction was completed, Thomas J. Thorne opened a general store in the building. The Stone House functioned as a post office while Edward S. Lyon served as postmaster from 1889 to 1893. Local surveyor C.H. Dieterich used the second floor for his office, and the building was used as a stagecoach stop as well.2 The building was a source of convenience for the town. People were able to pick up a few groceries, their mail, and catch up on information from stagecoach travelers all in one stop.

Edward S. Lyon began experiencing financial difficulties in the early 1890s. He failed to pay taxes on the building, and in 1898 the Boulder County Treasurer sold it for back taxes. J.H. Gilfflin purchased the Stone House that year, though there is no record of how he used the building. In 1903, C.P. Wilcox purchased the building and used it as a grocery store. He renamed the store C.P. Wilcox Groceries and Notions.3 After he opened his store, Wilcox installed a Howe Wagon Scale in front of the building. He would have used this scale to weigh the coal and seed sold at his store. He may have also charged farmers to weigh their commodities as well.

The Stone House has had six owners over the years and was purchased by the Ralston brothers, Steve and Dick, in 1974. Each of the owners maintained the historical integrity of the building and the Ralstons applied for National Landmark Status for The Stone House. The building still houses Ralston Brothers Antiques.