Church of Sts. Peter and Paul at Vysehrad

Vysehrad is a castle complex built by Vratislav II, Duke of Bohemia (1061-92, King of Bohemia after 1085) when he quarreled with his brother Jaromir Gebhart. This settlement is located on the opposite side of the Vltava River from the Prague Castle. Part of the grounds of Vysehrad includes the Church of Sts. Peter and Paul, one of only three Catholic churches that were allowed to hold services during the communist occupation from 1968-1989. Construction of the Chapter church began around 1070 and when first finished was dedicated to St. Peter. St. Paul was added as the church's second patron saint at the beginning of the 12th century. In its 900 years of existence, the church experienced many building eras, including Romanesque, Early Gothic, High Gothic, Renaissance, Baroque and Neo-Gothic. The last reconstruction on the church was in 1903 and is now the present-day appearance of the church. 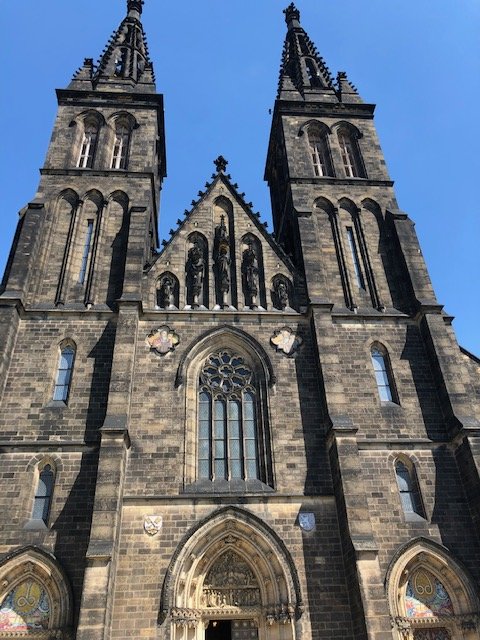 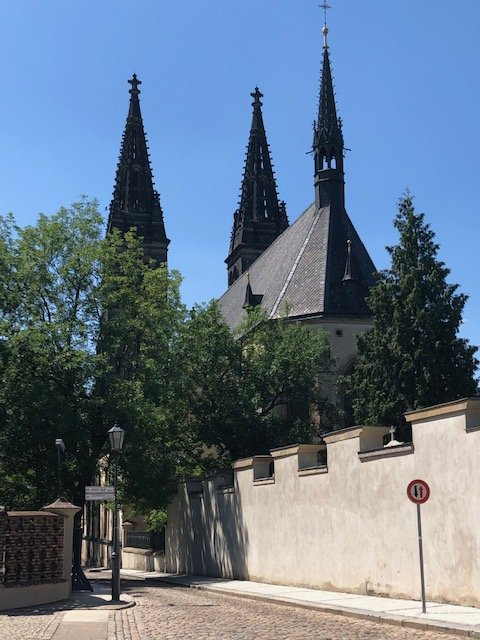 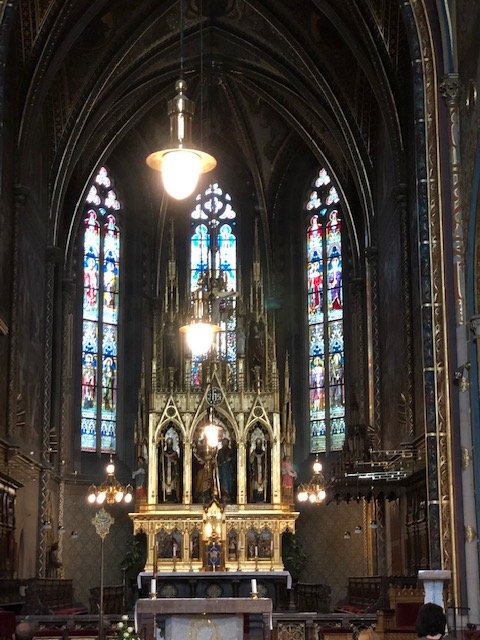 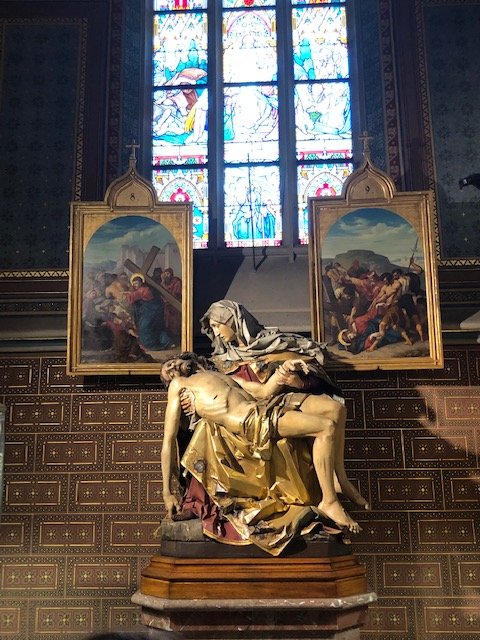 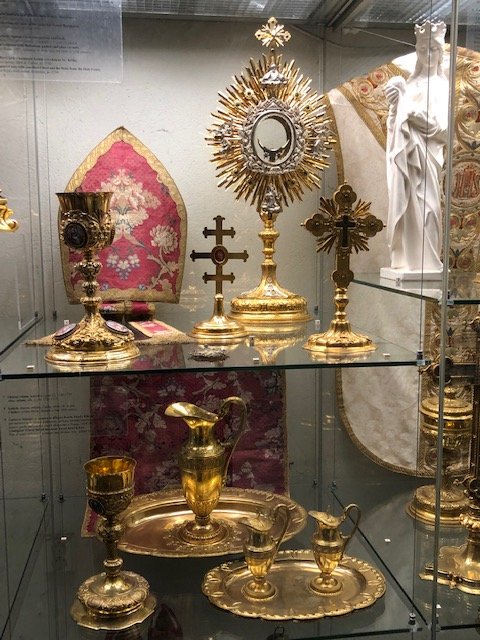 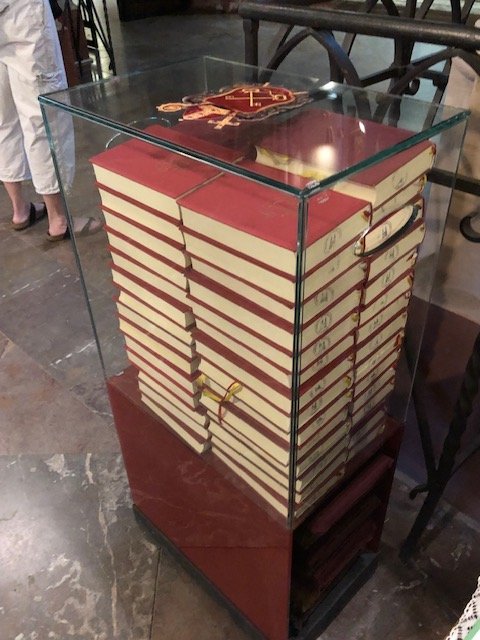 Before WW II and the Soviet takeover in 1968, the Czech Republic was mostly Catholic. In Prague alone, there are about 120 Catholic churches; however, during communism, Catholics were forbidden to attend services. In Prague, the only three churches where Catholics could attend mass were St. Vitus Cathedral, the Basilica of Sts. Peter and Paul, and Church of Our Lady before Týn (Chrám Matky Boží před Týnem). Attending these services was not easy though, as a person needed to show an ID and a pass, as well as answer many questions about why they were attending services. In addition to being closed, many Catholic churches were used by communist soldiers who destroyed the interiors and sold the religious relics for money. In addition to Catholic churches, monasteries and convents being closed, priests and Catholic intellectuals were arrested and put in prison or labor camps; many people had to worship in secret or in underground makeshift “churches.”

The Church of Sts. Peter and Paul was born of strife as well. When Bishop Šebír (Severus) of Prague died in 1067, he was succeeded by Jaromír Gebhart, who was living at Prague Castle with his brother, Vratislav II, Duke of Bohemia (1061-92, King of Bohemia after 1085). When disagreements escalated between the brothers, Vratislav decided to build a new residence for himself at a Slavonic fortified settlement on the cliff of Vyšehrad – in a deliberate move to directly oppose the grandeur of Prague Castle. The Church of Sts. Peter and Paul was built at this settlement. Original founding documents of the Chapter Church did not survive, but in the middle of the 12thcentury, a forged document by Pope Alexander II placed the original construction date as May 9, 1070.

One of the more popular stories about the building of the church is that Vlatislav is said to have carried 12 baskets filled with stones to put in the foundation of the church; it was a way to imitate how Emperor Constantine had founded St. Peter’s Church in Rome. In the 900 years of its existence, the church underwent seven stages of construction and styles. The first building stage was Romanesque, similar to the basilica within Prague Castle; the next stage was still Romanesque architectural style, but under the guidance of Duke Sobêslav, up until the year 1129 – this is when the interior of the church began to be painted and furnished. The third stage was Early Gothic, after a fire in 1249, and this reconstruction lasted until 1429.

After 1369, the fourth stage of High Gothic began and was initiated by Prague’s famous Charles IV, resuming the building plans that his mother, Queen Eliška Premyslovna had begun. In this stage, a new three-nave church was built by Matthias of Arras – the only other building of this kind in the Czech lands at this time was St. Vitus Cathedral. The original five-nave form of the cathedral has been preserved until today. According to archaeological studies, this building complex was 110 meters long; as a result, it became the largest sacred building in pre-Hussite Prague. Looted and damaged during the Hussite revolution, the Chapter church underwent another reconstruction after 1420 in the Renaissance style; however, the original plans for this reconstruction were never completed due to lack of finances and a changing mentality of the community the church served. In 1495, the church was partially repaired and consecrated again. However, by the 16thcentury the church was dilapidated and in need of major repairs; the church underwent a larger reconstruction from 1575-76. From 1607-1610, the choir was adapted and a new sacristy was built.

The final two stages include the Baroque style from 1723-1729 and the Neo-Gothic style from 1885-1903. The Neo-Gothic style is what has been preserved up to the present day. The interior decoration of the church was created by several Czech artists, including Frantisek Urban and his wife, Marie Urbanova-Zahradnicka, who painted portraits of saints on buttresses, and painted the walls with florid ornamental and figurative themes, inspired by the Art Nouveau style of Alfons Mucha.

From 1988-1994, the church underwent costly restoration repairs, most likely due to neglect during the communist era. In 1989, the Catholic church was a strong supporter of the anti-Communist movement. Only recently have all the lands owned by the Catholic church throughout all of Prague and the Czech Republic been restituted. Unfortunately, many churches today are more tourist attractions than places of worship and the Czech Republic is considered the least religious country in Europe with about 85% atheists.

Today, visitors can hear the ringing of two bells that have been preserved from the original Renaissance section of the building. One is called “St. Peter and St. Paul” and was made im the workshop of Prague’s best 16thcentury bell founder, Brixi of Cymperk in 1584. Baltazar Hoffman’s workshop created the second bell named, “Marie,” in 1621. There are 17 bells in the carillon and four big bells that can ring separately or with the carillon. Melodies are selected differently for regular days and holidays and there are 50 songs altogether stored in the memory.Mass services are held on Sundays at 9:00 and Thursdays at 18:00.