The Matewan Lockup and City Hall was constructed in 1908 by then-mayor Cabell Testerman. It is a small, one-story block building sat along First Avenue, directly across the main road from Mate Street. The facility played a role in the Matewan Massacre, as it was the headquarters for Testerman as well as Sheriff Sid Hatfield during their efforts to intervene in the dispute between the city's miners and the Baldwin-Felts Detectives who were attempting to evict them from their homes. In 1997, the building was recognized by the National Register of Historic Places as part of the Matewan Historic District. 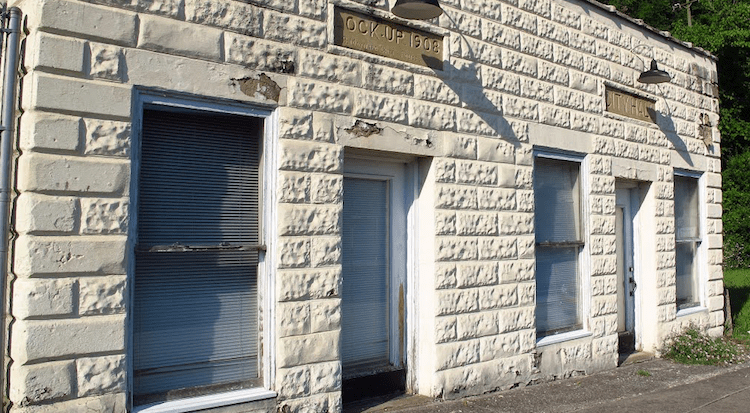 The Matewan Lockup and City Hall was built in 1908 at the request of Cabell Cornelis Testerman, the city's mayor at the time. The building was constructed out of molded blocks of sandstone and rock, with the finished product of the construction efforts resulting in a small, white, one-story building which sat along what was then First Avenue, adjacent to Mate Street where the majority of the establishments which make up the Matewan Historic District are located.

The building is notable not only for its diminutive size and nondescript architectural feats, however, but its relation to one of Matewan's most historically significant events, The Matewan Massacre. During the time leading up to the massacre, or the "Battle of Matewan," as it was known then, the dual purpose facility was under the control of both Mayor Testerman and his son-in-law, Sid Hatfield, who was appointed Chief of Police in 1919, a little less than one year before the battle. On May 19, 1920, Testerman and Hatfield sided with striking local coal miners who were attempting to unionize. After meeting at the Lockup and City Hall, they confronted the Baldwin-Felts Detective Agency who were hired by the Stone Mountain Coal Corporation to evict the miners from their company-owned homes. The confrontation resulted in a shoot-out between the two opposing groups that left ten dead, including Testerman. Sid Hatfield survived the battle, however, and those that survived retreated to the Lockup and City Hall to recover.

The Matewan Lockup and City Hall closed in the 1970s after the opening of a new City Hall building in the center of town. In 1997, the facility was recognized by the National Register of Historic Places as part of the Matewan Historic District. After its closing, the building became a tourist attraction of sorts, with people visiting to take pictures of the building. In addition, in the late 1990s through the early 2000s, individuals would spend a night in the jail, experiencing what early prisoners would have gone through during their time in the establishment. The building has since gone neglected, however, with tourists to Matewan instead focusing on sites related to the Hatfield and McCoy feud. In an effort to combat this, city council members launched an effort to remodel the Matewan Lockup and City Hall in August 2016, in an effort to revitalize interest in the building as a tourist attraction and ensure that its history is preserved.