The Pauley Bridge is located in Pikeville, Kentucky, and is suspended above the Levisa Fork potion of the Big Sandy River. Construction began on the wooden suspension bridge in 1935 and was completed in 1940 as the result of efforts made by President Franklin D. Roosevelt and the Works Progress Administration (WPA). The bridge connected the small community of Pauley to U.S. route 23. Pauley Bridge was closed in the 1980s to motor vehicle traffic, though tourists may still access it by foot or bike, and was later recognized by the National Register of Historic Places in 1992 because of its unique architecture and history. 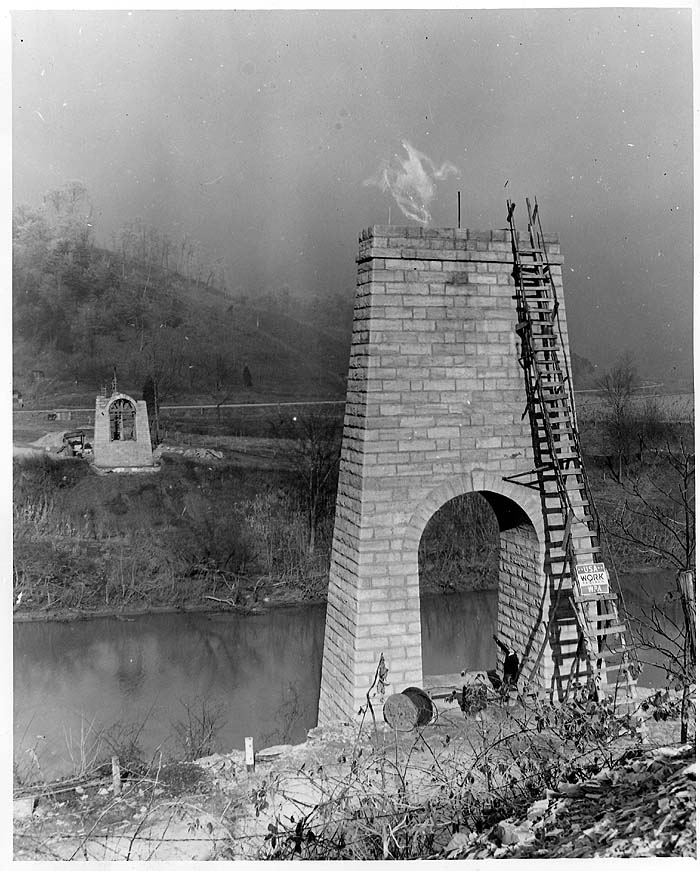 Front view of the bridge 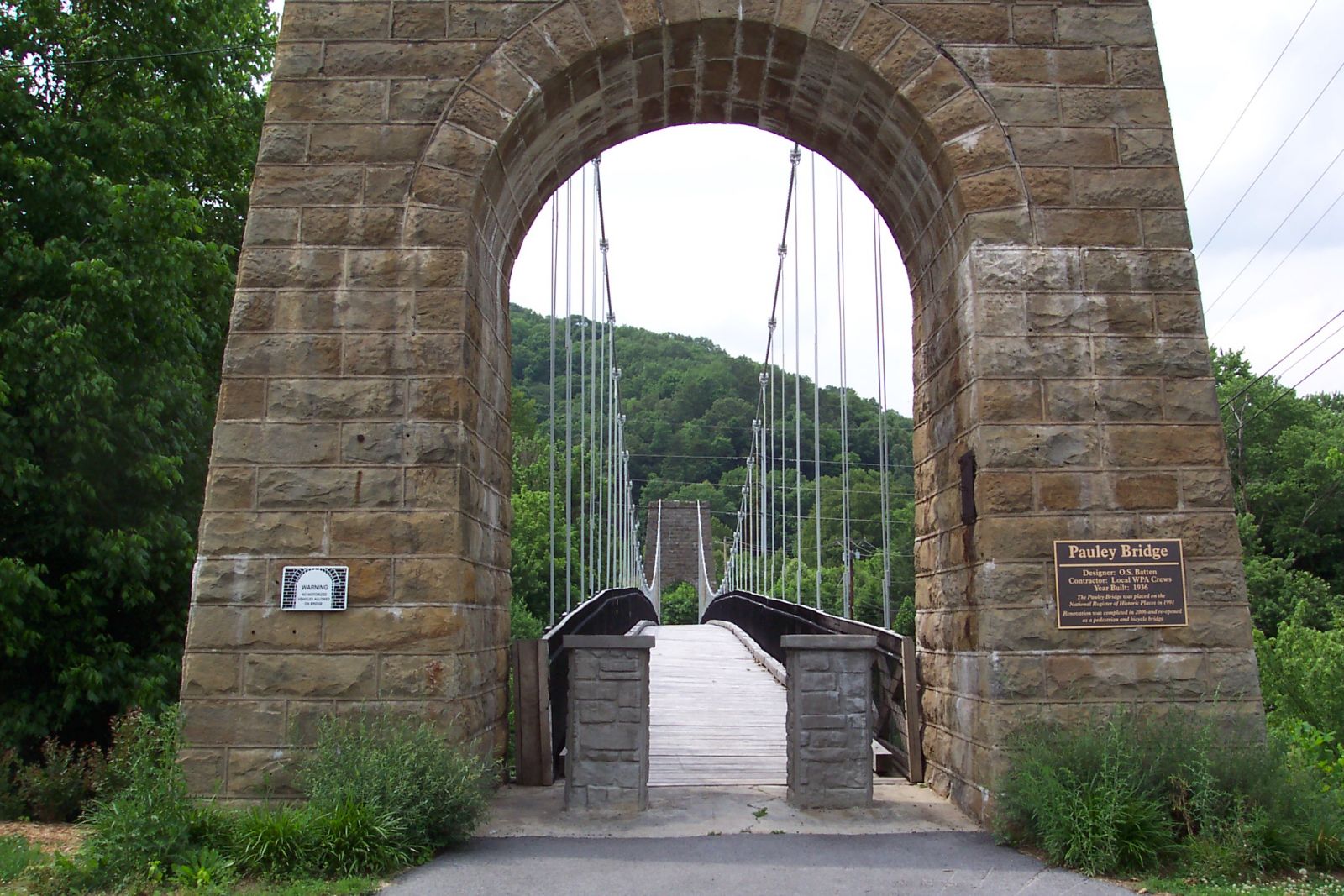 Side view of the bridge 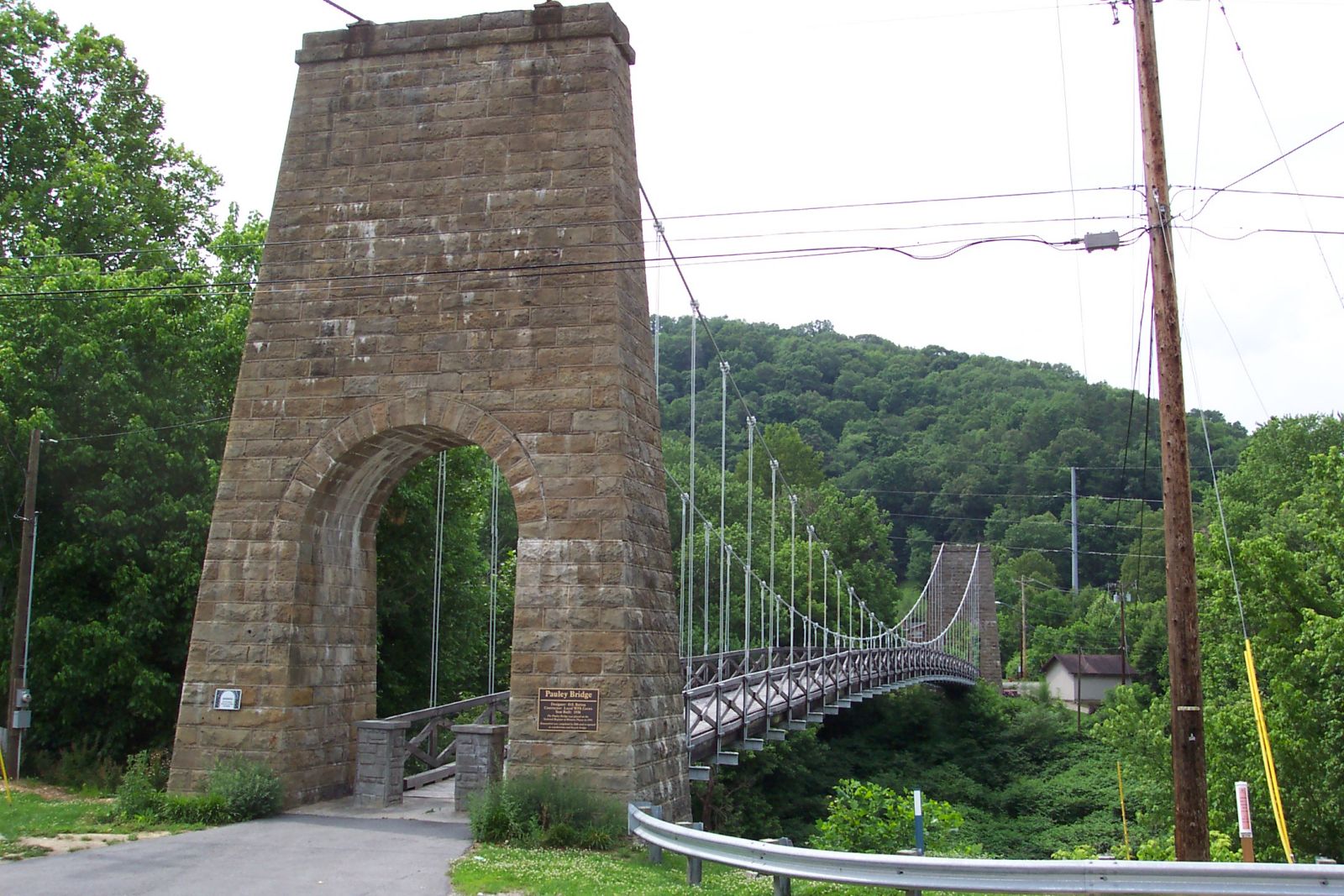 Expanded side view of the bridge 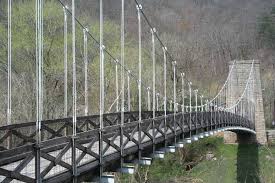 Construction began on the Pauley Bridge in Pikeville, Kentucky, in 1935 as part of President Franklin D. Roosevelt's Works Progress Administration, the WPA, which targeted underdeveloped communities across the United States in an effort to help revitalize them. The bridge, which was completed in 1940, spans the Levisa Fork of the Big Sandy River, and so its primary purpose was to connect the small community of Pauley, Kentucky with US highway 23, the main route in Pike County connected to Pikeville.

Upon its completion, the bridge was a one-lane 370 ft wooden decked cable suspension bridge which sat above the Big Sandy River. At approximately eleven feet wide, the bridge was just large enough for a motor vehicle to make its way across, though there were initial fears that the bridge was too narrow or not stable enough to support multiple vehicles at once. The bridge is also comprised of wire cables connected to large stone and concrete anchors at the ground level, allowing the bridge to remain in place. One of the most notable architectural feats of the bridge is that its base is constructed almost entirely of wood, including he floor beams, deck, and stringers, makes it one of the only bridges of its design still standing in the region. This unique design is furthered by the fact that the bridge is the only swinging suspension bridge which features rough-cut sandstone towers. This, coupled with its status as one of the few remaining suspension bridges in Kentucky as well as its connection to President Franklin D. Roosevelt and the WPA, led to the Pauley Bridge being added to the National Register of Historical Places in 1992.

The bridge attracts tourists as a result of its architectural uniqueness as well as its history. The bridge was closed to vehicles in the 1980s, though foot and bike traffic was still allowed to cross, allowing tourists to travel, view, and photograph the bridge in this manner. Since 2006, the bridge has been undergoing extensive renovations by the city of Pikeville in an effort to preserve the bridge and potentially open it up to motor vehicle traffic again.