On November 18, 1863, Abraham Lincoln stayed the night at the home of David Willis prior to dedicating the cemetery at Gettysburg. Most attendees assumed that the two hour speech of Secretary of State Edward Everett would be the defining moment of the next day's ceremony. However, the short speech Lincoln prepared while travelling to Gettysburg and while staying at this house became one of the most famous speeches in American History.

The Civil War made its way to Gettysburg in July 1863; four months later President Abraham Lincoln stayed here prior to dedicating a cemetery for the fallen soldiers of the Battle of Gettysburg. 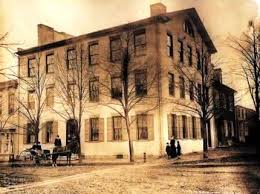 Statue of Abraham Lincoln outside the David Wills House 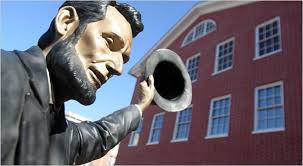 Attorney David Wills invited President Abraham Lincoln to stay at his home the night before he was scheduled to make a few remarks at the dedication of the Gettysburg Cemetery. Although the renowned orator Edward Everett was one of the most famous speech makers of the era, Lincoln's address to the assembled audience would become one of the most famous speeches in American History. Everett and Lincoln's speeches were both well-received but both were largely forgotten in the years that followed. However, influential authors rediscovered and published the Gettysburg Address in school primers and the Lincoln's speech became famous.

The home of David Wills had been at the center of the cleanup effort after the Battle of Gettysburg. Many families mailed requests to David Wills as part of an effort to locate missing sons and husbands after the battle. The dedication of the cemetery at Gettysburg, and the later fame of Lincoln's speech, transformed Gettysburg as a place of devastation to a symbol of our nation’s new birth of freedom. Lincoln's speech sought answers about meaning of the war for many families in the North who lost loved ones.

The David Wills House was opened to the public as a local history museum on February 12, 2009, Abraham Lincoln’s 200th birthday. This house offers visitors a glimpse of location where the Gettysburg Address was written. The museum features six galleries, including two rooms that have been restored to their 1863 appearance. One bedroom is the actual room that Abraham Lincoln stayed in while preparing for the cemetery dedication.