Construction of Chicopee’s City Hall began in early 1871. Upon the building’s dedication in December of 1871, the townspeople dedicated the building with a ceremony that also recognized the 72 local young men who had lost their lives during the Civil War. The dedication included a ceremony honoring those who had lost their lives in the war whose names were engraved into the two memorial tablets which stood at either side of the entrance to the building. The tablets list the names of the soldiers, date of death, location of death, and, occasionally, the cause of death. The building incorporates Victorian Gothic elements, and through the years little has been altered. Today, the original Black walnut and butternut woodwork remain along with the same stained-glass windows that were present at the time of the dedication.

Pictured is the south tablet, which says "honor the brave." 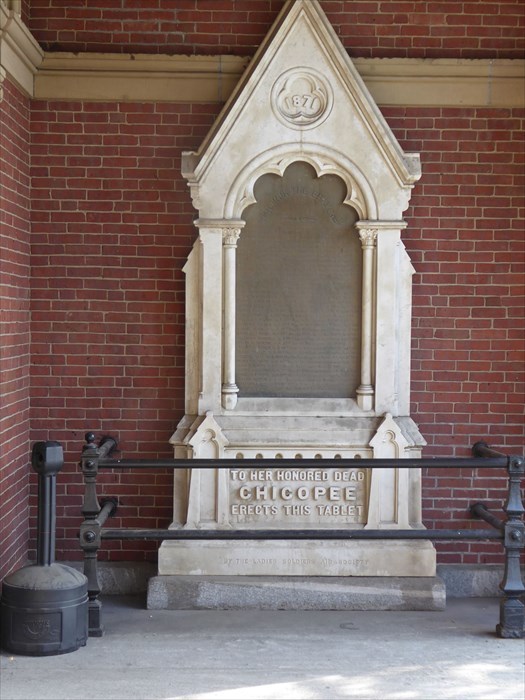 Close-up of the south tablet. 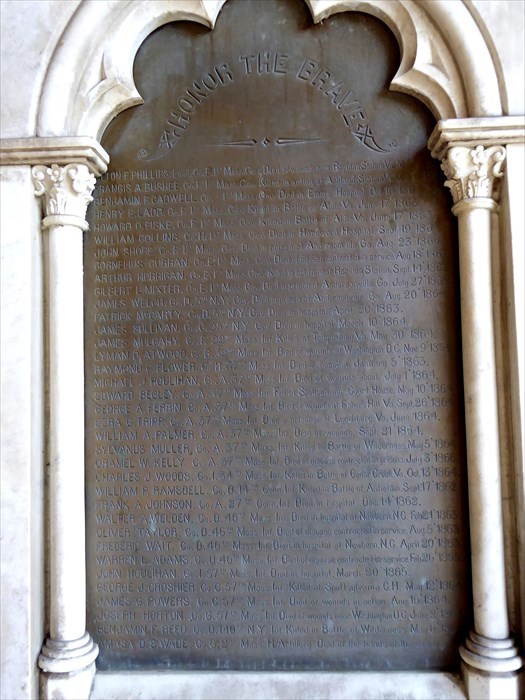 On opposite ends of the entrance to Chicopee Massachusetts’s City Hall sits a pair of tablets that lists the names of 72 men from Chicopee who died in the Civil War. These tablets also give information on the date these men died, the location of their death, and their cause of death. For example, the cause of death for one name listed is described as complications from “disease contracted in prison.”

Listed below the lists of the honored soldiers, inscribed on the north tablet, is the following: “To her fallen heroes Chicopee erects this tablet.” The north tablet is called the “roll of honor” and lists 38 members of the Union Army who lost their lives. On the south tablet, the following is inscribed below the listed names: “To her honored dead Chicopee erects this tablet.” The south tablet is identified with its list named “honor the brave,” and it features the remaining 36 members of the Union Army who perished during the war.

After the building and its memorial tablets were dedicated in December of 1871, the town’s paper described the ceremony in detail, as well as reprinted the full texts of the memorial tablets into that day’s paper.

These tablets honoring the town’s fallen soldiers is not the only piece of Civil War history here, in fact, all of the metal railings, hinges, fittings and the eagle weathervane used on the building were all cast at the Ames Manufacturing Company, famous for Ames Swords used during the Civil War.