Prague Castle is nestled on a hill overlooking the city of Prague making it a great vantage point for those that hold power over the lands. Unfortunately, this makes it easy for the castle to be used for darker purposes in its 1,000+ year history. 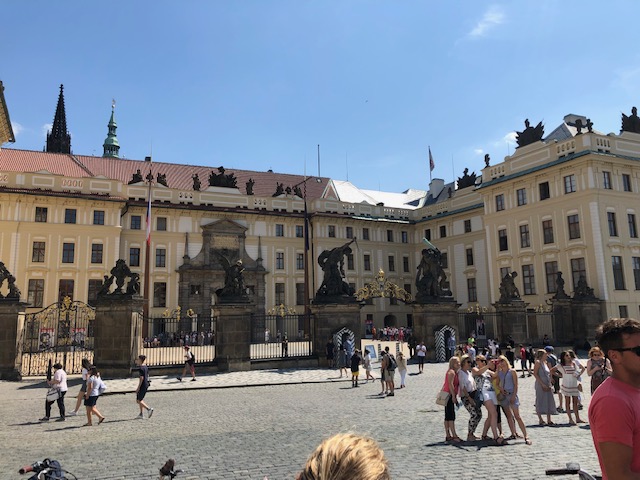 Prague Castle was first build in 880 by Prince Borivoj of the house of Premyslides. Keeping with medieval tradition the original structure had a moat and the first walled building constructed was the Church of the Virgin Mary. St. George Church and St. Vitus Church were later founded in the first half of the 10th century. Prague Castle acted as the seat of the Head of State, princes, kings, and the Prague Bishop. Prague Castle was also the location of the first convent, the order of the Benedictine nuns, in Bohemia that was located next to St. George.

In 1939 the castle took on a darker role. The Czechoslovakian president met with Hitler and was informed that his country would be invaded and it was up to him to allow it to happen peacefully or to be met with catastrophic and deadly force. He tried to resist but realized that his country did not stand a chance against the Nazi army and agreed to allow the Nazi army peaceful entry into Prague. Residence were warned to allow them to enter and many stayed inside their homes when the Nazi forces marched in and made their way to Prague Castle on March 15th, 1939.

Hitler arrived later that day. He took a tour of Old Town and then went to Prague Castle to inspect his troops. He spent that night in the castle. The castle then became the headquarters for Reinhard Heydrich until May 27th, 1942 when he was ambushed on his way to the castle. He later died from his injuries.