Originally dating from the late 1930s, this building once held the Communist government of Czechoslovakia. It is located at the end of Wenceslas Square, between the National Opera House and National Museum. The Assembly, with its sharp, geometric angles and modern glass-and-steel facade, is an architectural anomaly for the area. This building was where the demands of the Velvet Revolution were accepted in 1989, beginning the transition to post-Communism. Today it houses exhibits from the Czech National Museum and is open to the public.

The front of the Assembly Building. 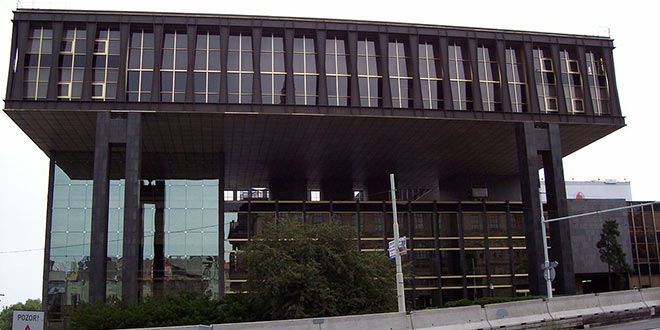 Originally constructed as a stock exchange in the late 1930s, the Communist government elected to greatly expand the building. This expansion took place during the late 1960s by the Communist government in Czechoslovakia. It is located at the end of Wenceslas Square, between the National Opera House and National Museum, in the Nové Město area of Prague. Just across the street from the Assembly is Petschek Palace, which was used as the Gestapo headquarters during Nazi occupation. The neighboring street's name is Politických vězňů, which translates as "Street of Political Prisoners". The area was originally a marketplace and now serves as a commercial, transportation, and cultural hub of Prague.

The Assembly, with its sharp, geometric angles and modern glass-and-steel facade, is an architectural anomaly for the area, which is dominated by more traditional construction. This building was constructed to withstand a nuclear attack; as such, it contains two nuclear fallout shelters. This building housed the Czech Communist government for decades, and it was where the demands of the Velvet Revolution were accepted in 1989, which began the transition to post-Communism and laid the foundations of the modern-day Czech Republic.

Until the partition of 1992, the building served as the National Assembly of Czechoslovakia.  Beginning in 1995, then-President Václav Havel supposedly rented the building to Radio Free Europe for a nominal fee. Since 2015, it has housed exhibits from the Czech National Museum and is open to the public. Today, you can see museum exhibits, take a tour of the building's old parliament rooms, or visit the Communism-themed cafe. The Assembly's many purposes over time mirror the sociopolitical evolution of Prague and the Czech Republic over the past century - it has served as a capitalist stock exchange, the seat of the Communist government, a center of post-Cold War liberalism and free expression, and finally as a public space commemorating the cultural legacy of the Czech nation.