Designed by well-known Kansas City architect James Oliver Hogg, the Neoclassical Marion County Courthouse was erected in 1901. It features architectural elements typical of the style including Corinthian columns, and a portico. In the center is a large octagonal dome that is topped with an octagonal lantern. The courthouse was the only stand-alone courthouse built in Hannibal, built simultaneously with one built in the county seat of Palmyra. After decades of debate, officials decided to divide county services and built two courthouses in both the county seat and the county's economic hub of Hannibal. 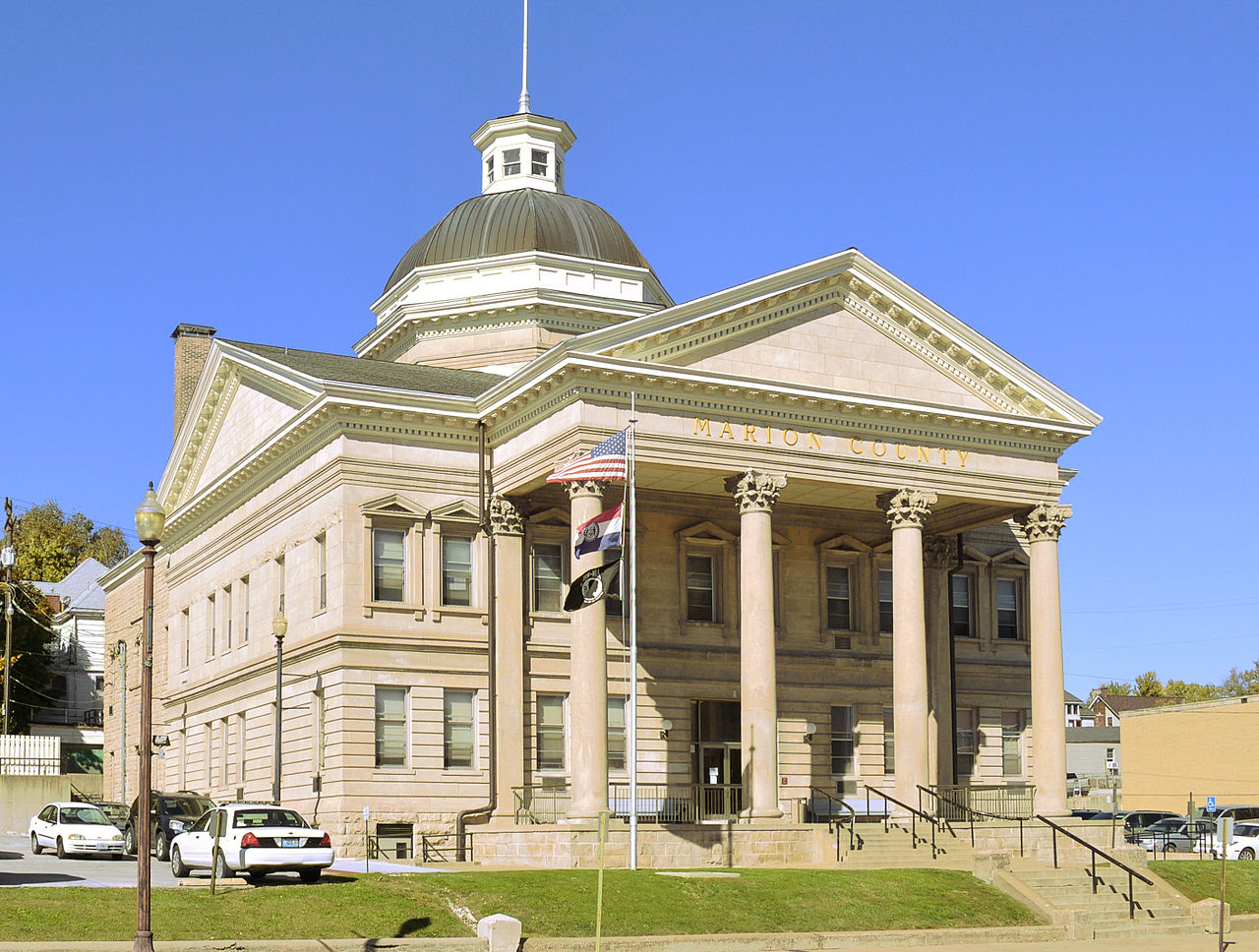 Completed in July 1901, the Marion County Courthouse is the only stand-alone courthouse constructed in Hannibal and one of two courthouses built that year in Marion County. The other courthouse arose in the rival-city Palmyra, amidst political debate between the two cities; Hannibal's population far exceeded Palmyra, the county seat, during the late nineteenth century, So, rather than relocating all of the court's activities to Hannibal, officials decided to divide the courthouse functions among the two towns, which appeared to appease everyone involved in the debate. The building arose at a time when Hannibal's economic and population boom had nearly peaked after decades of expansion, which primarily started in the 1850s.

White settlers began filtering into what is now the Marion County area (slowly displacing the indigenous population) after the 1803 Louisiana Purchase and even more so after the federal government surveyed the area in 1818. The Panic of 1819 further pushed people west into Missouri, allowing it to transition from a territory to a state in 1821. Still, most travelers crossed the Mississippi River into St. Louis and traveled to the state's interior rather than make the arduous trip north along the river to what is now Hannibal. Thus, while modern-day Marion County hosted fur traders and a few settlers, the population only slowly climbed during the first decades of the nineteenth century.

The establishment of the Missouri Territory included dividing the area into four districts, with Marion County existing as part of the St. Charles District. All civil matters and land claims had to be taken to the district court in St Charles, an onerous trip, to say the least. But, population increases led to county governments and increased courts. Missouri became a state in 1821, and four years later, in 1825, the state established Marion County with Palmyra as the county seat. Although there had been an order to build a courthouse in Palmyra in 1829, the contract was not let until 1831, and it was not until 1835 that the first Marion County Courthouse, a brick building, was completed. From 1853 to 1855, the construction of a new courthouse took place, replacing the first courthouse on the same property. The large, brick building had a tall dome reached by winding stairs that provided a panoramic view of Marion County and the Mississippi River, seemingly demonstrating Palmyra's significance.

However, by the 1830s, investors established Hannibal as a riverboat port where farmers traveled to Hannibal to receive or send goods to St. Louis from Hannibal. Although farmers had to travel along poorly maintained roads to Hannibal, the town slowly evolved into the county's primary commercial center due to its connection to St. Louis. By the 1850s, several industries began to arise in Hannibal, furthering its economic expansion and concurrent population increase. Investors viewed the town's growth and access to the river positively, leading to the construction of the Hannibal-St Joseph Railroad. In addition to such industries as wholesale grocery businesses, cigar making, pork packing, flour mills, carriage making, and various small businesses, Hannibal supported a burgeoning lumber industry by the end of the 1850s. Rafts of logs were floated down the Mississippi River from northern forests to Hannibal, where they were cut and processed before getting shipped on the railroad. As a result, Hannibal's population tripled during the 1850s so that by the start of the Civil War, Hannibal's 6,505 residents accounted for nearly half of the country's entire population (14.874); Hannibal had grown from a small settlement to a bonafide economic hub and urban center.

The genesis of Hannibal's boom occurred nearly simultaneously with the opening of Palmyra's new courthouse. Even when Hannibal only served as a popular riverside port in 1844, the county established a small Court of Common Pleas, which first only handled maritime matters but quickly grew to handle a variety of legal matters, effectively becoming a City Court. Indeed, in 1861, county officials purchased an old church building to use as the offices for the Hannibal Court of Common Pleas, the Court Clerk's office, and the office of the Probate Court; the urban rivalry had commenced.

Although the U.S. Civil War hindered Hannibal's growth, expansion continued quickly after the war ended. Hannibal stood as the nation's fourth largest lumbering center by 1870 and matured into a significant railroad center, demonstrated by the construction of a bridge across the Mississippi in 1871 and the completion of the Union Depot in 1882, effectively ending the town's complete reliance on St. Louis to reach eastern markets. Even when the significance of the lumber industry waned considerably by the 1890s, Hannibal's stance as an economic hub had been cemented, and the city's burgeoning shoe industry helped secure that role. By the early 1900s, Hannibal's population exceeded 18,000, and the city enjoyed the benefits of a streetcar line, had an established modern infrastructure (including electricity, telephone, gas, and water companies), and otherwise appeared as a modern, albeit small, city.

Throughout the decades following the Civil War, pressure mounted to build a County Courthouse in Hannibal; some even considered moving the county seat to Hannibal. Palmyra's central location within the county proved less significant because Hannibal's growth coincided with more (and better) roads. The debate created a division within the county, forcing officials to find a compromise that would appease residents and businesses in both cities, as well as rural citizens with attachments to either town. Finally, in 1900, the county decided to fund the construction of two new county courthouses, one in Hannibal and one in Palmyra. In doing so, it required a division of county services with a probate clerk, collectors, assessors, and sheriff's offices operating in both locations. Palmyra remained the official county seat and provided offices for the treasurer, road and bridge commissioner, surveyor, public administrator, and county superintendent of schools, while Hannibal continued to house the county attorney, court clerk, and Court of Common Pleas. The two towns have both served as county-government centers since the 1900 compromise.

Not long after the courthouse opened, Hannibal's pattern of growth declined significantly, peaking on the eve of the Great Depression, with a population of 22,761 (the county also reached its peak population of 33,493). Although another boom occurred during the 1950s, the overall county population continued to decline. Thus, the courthouse stands as a reminder of a time when two competing cities battled for regional superiority during a period of growth, but growth that unbeknownst to anyone had nearly peaked.

Although the Federal Building has mainly supported bars and restaurants since the 1980s, it stands with the Hannibal Courthouse as one of the few well-preserved public buildings. The courthouse has undergone an extensive, two-decade-long historic rehabilitation that began in 1982.