Originally addressed as 815 Edmond Street, this building was designed by Eckel & Aldrich, Architects and constructed in 1912. It has served as the home of the St. Joseph News-Press for over one hundred years. 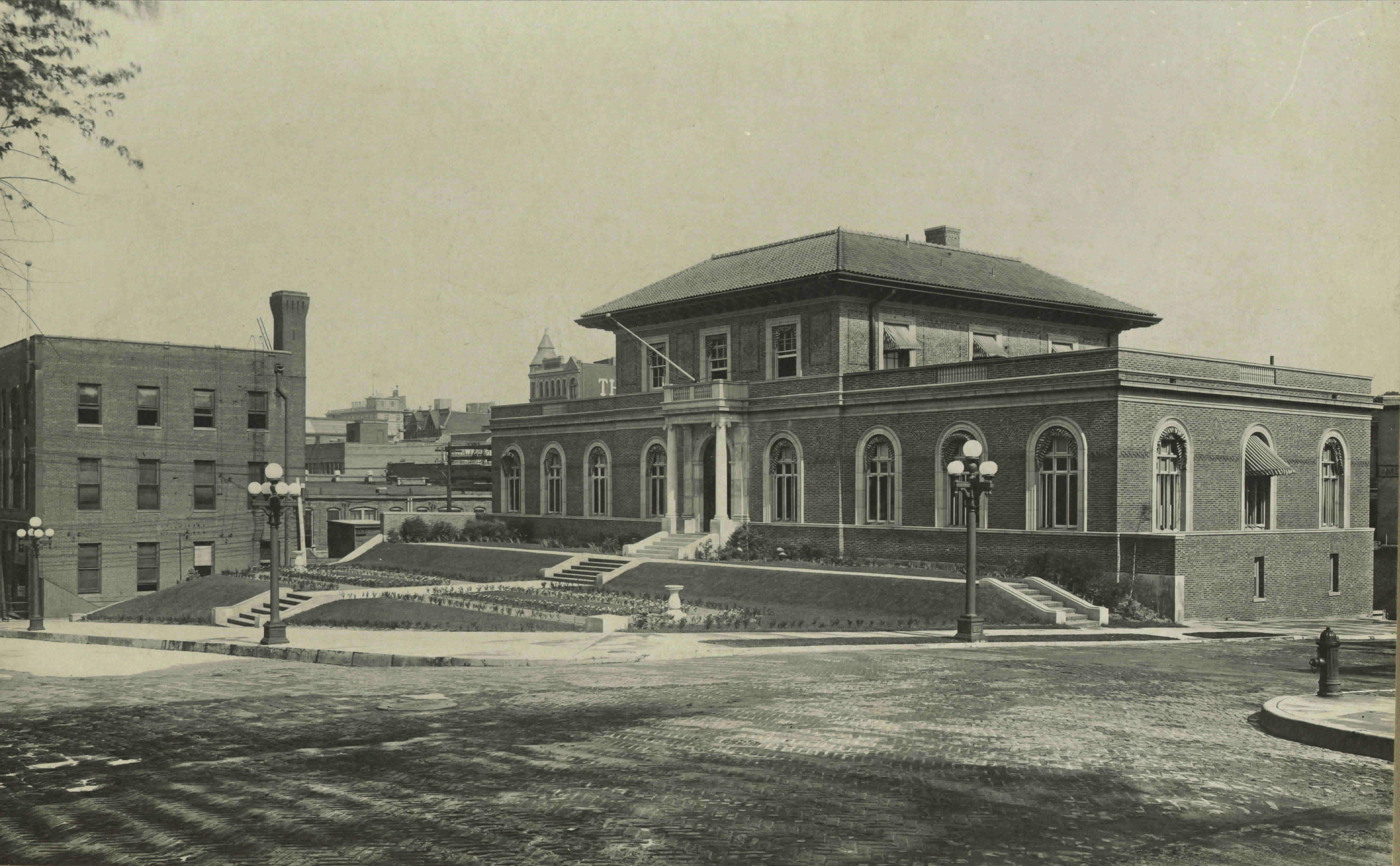 “The first newspaper, the Gazette, a weekly publication, was established in 1845, the first issue appearing on Friday, April 25th. William Ridenbaugh was the proprietor and printer, and the name of Lawrence Archer, then a prominent attorney, is given as editor. It is said that the type and press were part of the equipment of the Mormon paper, published at Independence, which had been suppressed. In 1854 Holly & Carter took charge of the Gazette, then it passed into the hands of Gen. Lucien Eastin and next to P. S. Pfouts and J. H. R. Cundiff. In 1857 these gentlemen began the publication of the Daily Gazette, the first daily newspaper issued in the city. This continued until the breaking out of the war. When it became unsafe to utter such political sentiments as the Gazette upheld, the proprietors suspended publication, laid away the pen and went to the front to do battle for the South with the sword. June 28, 1868, the Gazette again appeared, Colonel Cundifif, Mr. Ridenbaugh and Peter Nugent being the publishers. In December of 1873 the paper passed into the hands of Joseph A. Corby & Company. The next publishers were F. M. Tufts, George W. Belt and J. B. Maynard. In November of 1875 Mr. Maynard was succeeded by S. A. Gilbert. In April of 1878 the Gazette-Chronicle appeared, the Chronicle having been published by M. B. Chapman. Shortly after the consolidation, Charles B. Wilkinson and M. B. Chapman were announced as publishers. September 29, 1878, the ''Chronicle" was dropped from the name and the paper again appeared under its ancient and original title. In November, 1878, Charles B. Wilkinson assumed sole editorial and business management. March 12, 1879, it was announced that the paper had passed into the hands of the Gazette Publishing Company, a corporation that was to be under the direction of Charles B. Wilkinson, Lewis Burnes and W. E. Smedley, the latter of New York. Colonel Wilkinson was editor until July 12, 1879, when he went to Denver, where he died in January of 1881. Lewis Burnes died November 17, 1879. Then the management of the paper was in the hands of James N. Burnes. Jr., until January 1, 1886, with the exception of a brief period, from June to September, 1883, when it was managed by George E. King. Maj. John N. Edwards was the editor of the paper from June, 1883, until April, 1886. Mr. Burnes was succeeded as manager by Charles F. Cochran, January 1, 1886, who, after the departure of Major Edwards, was the editor as well as the manager until he was elected to Congress in 1896. He was succeeded as manager by Frank Freytag, Jr., who remained in charge until July 1, 1900, when he was succeeded by Chris. L. Rutt. On August 1, 1900, the Gazette and Herald were consolidated under the name of Gazette-Herald, with Chris. L. Rutt as manager and Frank B. Moore as editor. The owners were the Burnes estate and William M. Wyeth. About a month afterward the property passed into the hands of Walter B. Holmes of Memphis, Tennessee, who conducted it two months and then sold it to Charles B. Edgar and others who at that time published the Daily News. Mr. Edgar published the Gazette-Herald from the Daily News plant, with Chris. L. Rutt as editor, until March 30, 1902, when he sold the paper to Lewis G. Gaylord, of Colorado Springs, Colorado. From the time of its consolidation until its sale to Mr. Gaylord, the Gazette-Herald was published as an independent newspaper. Mr. Gaylord dropped the hyphen and "Herald" and published the Gazette as a Democratic paper until November of 1903, when he sold it to a syndicate of Republicans, who are now publishing it as the organ of their party. Elmer E. E. Mcjimsey is the editor.”

“The Monday Morning News was started August 20, 1877 by Isaac Pfeiffer. Colonel Wilkinson took charge of the paper after several issues and made a hit with it. The last issue of the Monday Morning News appeared in June, 1878, when Colonel Wilkinson assumed editorial charge of the Gazette. In July, 1878, a week or two after its suspension, the material and franchises of the Monday Morning News were purchased by George E. King, and used by him in publishing an illustrated weekly. In October following he sold out to Judge Andrew Royal and W.M. Patton, who continued its publication under the original name of Monday Morning News. This, some time after, was changed to Western News by Judge Andrew Royal and George H. Cross. It was, at first, a small four-column sheet. September 3rd following, this was enlarged. April 19, 1881, the paper was purchased by W.F. Bassett and J.W. Spencer, who enlarged and otherwise improved it. Gilbert J. Spencer succeeded W.F. Bassett in the partnership. In 1888 the paper was sold by J.W. and G.J. Spencer to Byron Dunn and George W. Martin of Maryville. In July of 1889 the property was acquired by Carles M. Palmer and E.B. Haskell. C.M. Shultz was placed in charge of the paper, and continued to manage it until August of 1894. In September of 1894 Charles B. Edgar became associated with Messrs. Palmer and Haskell and published the paper until October of 1903, when he sold his interests to a company headed by Louis T. Golding of New York. The publication is now called The St. Joseph News & Press, and represents the consolidation of the Daily News & Evening Press. The Press was established in August of 1902 by W.H. Turner and Howbert Billman of Chicago and was published for about 14 months, when it was absorbed by the News corporation. Mr. Golding is now the publisher of the News & Press and Cris. L. Rutt is managing editor.”

This tour showcases some of architect Edmond Eckel's works in St. Joseph, Missouri.