Designed by Edmond J. Eckel, during that time the Eckel and Mann Firm, in the Richardsonian Romanesque style in 1889. The construction of the building is primarily red brick, The institution arose out of the desire by the large German population in St. Joseph to establish their own bank. On the facade, you will find zoomorphic grotesques, gargoyles, and Eckel's signature wreath motifs. 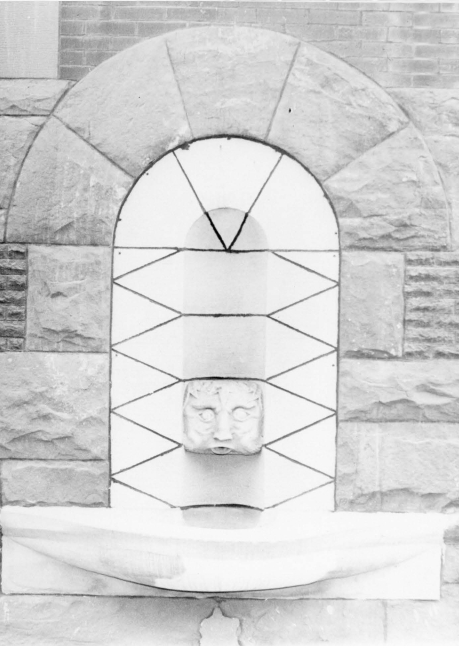 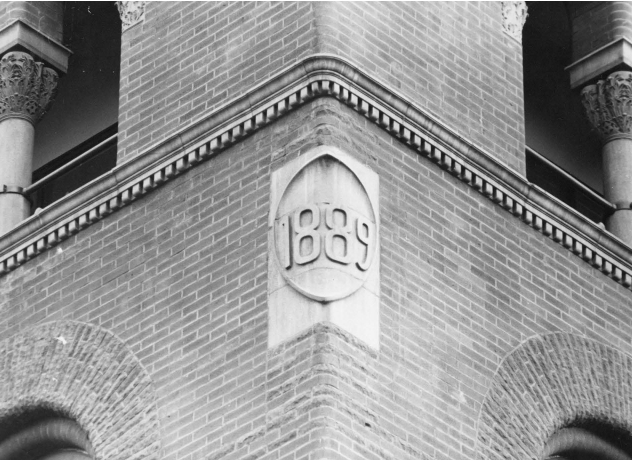 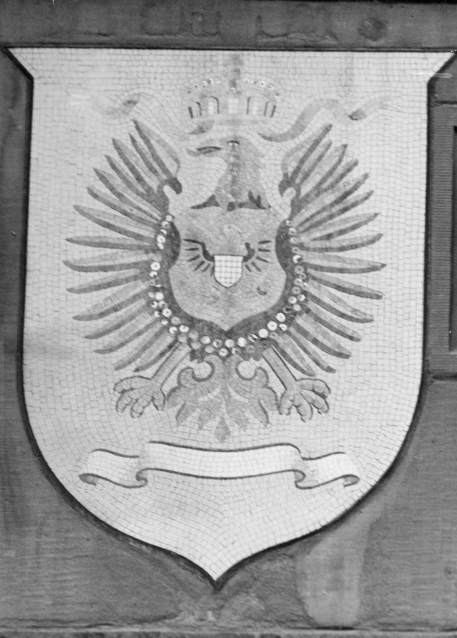 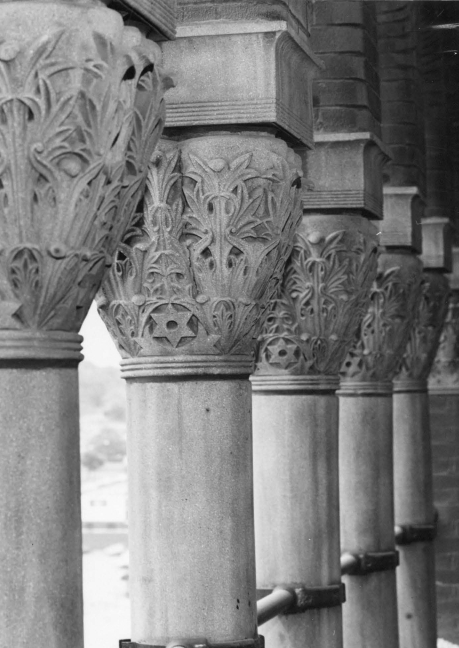 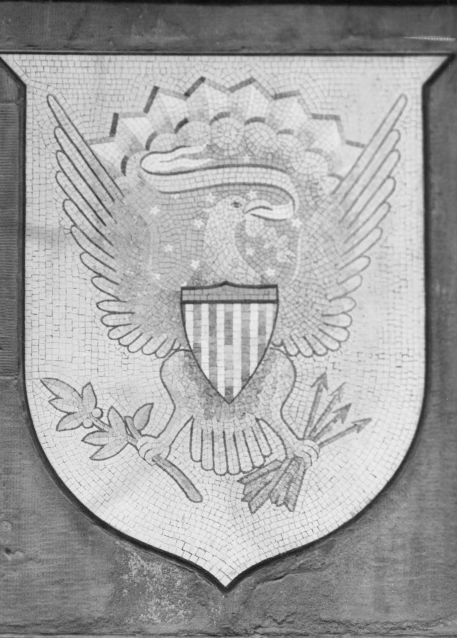 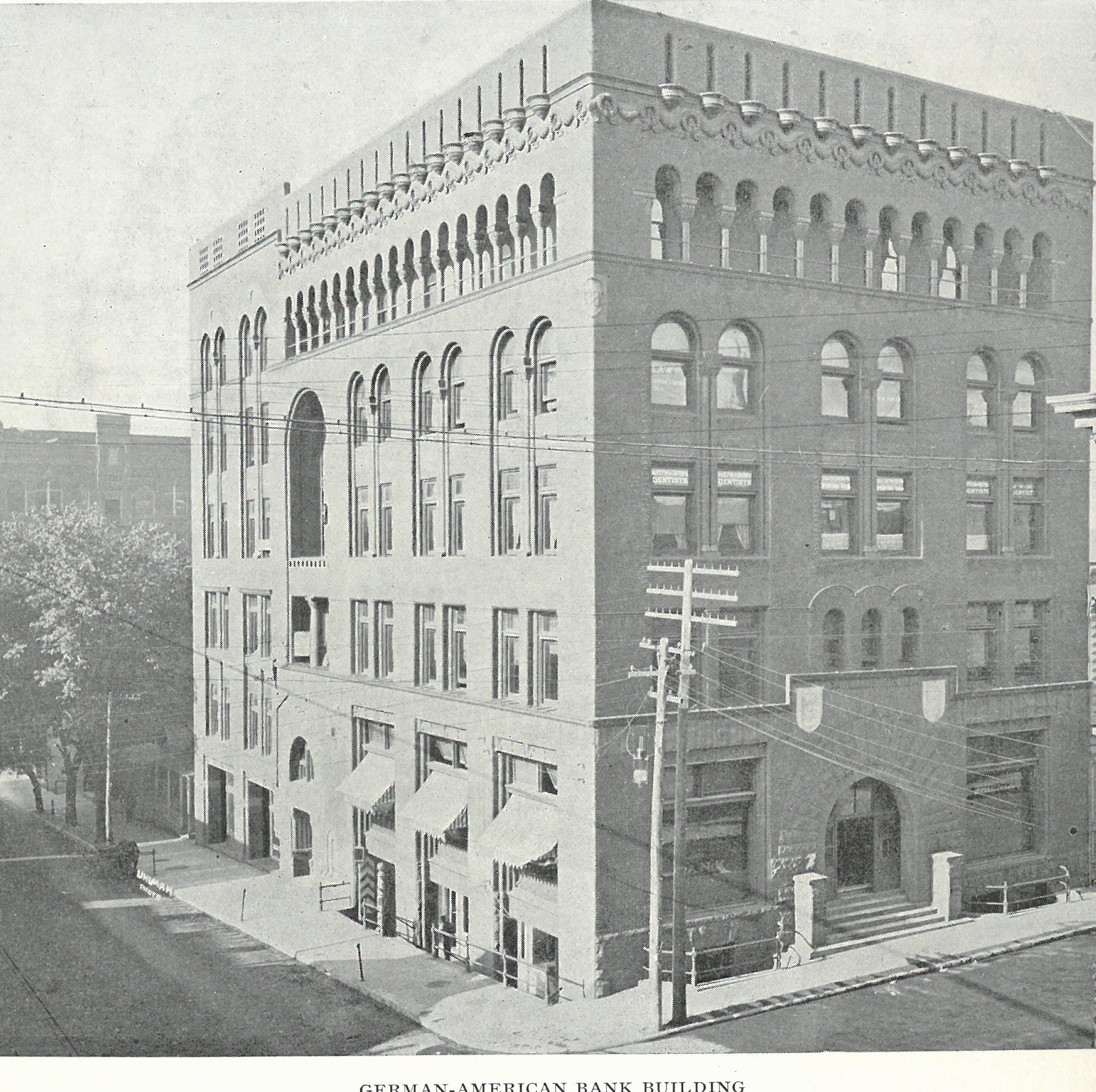 St. Joseph has a strong German heritage. German immigration to Missouri was consistent throughout the 1800s, but reached its peak in the 1870s-1890s with the Wars of German Unification. The fertile Missouri River Valley provided German immigrants with land similar to their homeland around the Rhine River, which earned the area the nickname of the Rhinelands. With St. Joseph being the westward terminus for the country, many entrepreneurs found their way to the city.

Prussian immigrant, Frederick Smith, was one of the earliest settlers in the St. Joseph area, platting the city out for its founding in 1843. As German immigrants favored abolition, the influx of Germans into Missouri altered the predominant southern slave owning population of the state, increasing tensions leading into the Civil War. After the war, due to the large German population in St. Joseph, civic infrastructure was developed to serve the community, including a German-English School, Heckel’s Benevolent Home for German Immigrants, the Volksblatt newspaper, and the German-American Bank.

The German-American Bank was founded in 1887, but it quickly outgrew its original location at 114 North Fifth Street. In 1889 the directors of the bank hired Eckel and Mann to design a new building at the corner of Seventh and Felix Streets. As this was the height of Ellis’ work with Eckel and Mann, the building was one of the first skyscrapers in the city with red brick Richardsonian design, open loggia, archways, and gargoyles and bas reliefs throughout. Its construction was delayed as plans for a grand hotel behind it failed to come to fruition.

The German-American Bank served the German speaking population of St. Joseph until the onset of the First World War. As anti-German sentiment rose in the United States, it quickly became dangerous to identify with the culture of your homeland. WWI marked the end of the “hyphenated American.” You were either fully American, or you were the enemy. As such, the German-English School was renamed the Longfellow School as German language courses were removed from the school district and the German-American Bank became the American National Bank in 1918. The German and American crests which adorned the main entrance were covered until restorations in the 1970s. In 2015 Mosaic Life Care purchased the building. After extensive renovation and restoration, the building now serves as Mosaic's administrative offices.

This tour showcases some of architect Edmond Eckel's works in St. Joseph, Missouri.

Towers of St. Joseph: The Local Architecture of Harvey Ellis

Harvey Ellis was born in Rochester, New York to Dewitt and Eliza Haseltine Ellis on October 17, 1852. He was the eldest of four brothers, the youngest passing away in infancy. He attended West Point, but was discharged due to failing grades in 1872. Harvey was artistic throughout his youth and after leaving West Point joined a group of artists in Rochester creating and teaching art. They formed the Rochester Art Club, one of the oldest continuing clubs, in 1877. The year of the club's founding, Harvey joined the architectural firm of his brother, Charles. Harvey's art gained national attention and his architectural stylings came to define Rochester. The firm of H. & C.S. Ellis operated in Rochester from 1877-1885, constructing civic and residential buildings throughout their hometown. The brothers consistently made the news, Harvey as a renowned artist and Charles as a member of the school board. Their mother, Eliza, passed away on September 13, 1884 and by the beginning of 1885, the firm became embroiled in a bribery case. Charles was indicted on January 29 on charges of bribing a public official to secure the contract to build the county jail. The trial was messy and heavily publicized and by March, Harvey had left Rochester for Minnesota. After spending some time in St. Paul, Harvey joined the firm of Leroy Buffington in Minneapolis in 1887. Buffington became famous for inventing the skyscraper and was the premiere architect in the Midwest through the 1880s. As Ellis was an award winning architect and artist at the time, it is likely Buffington sought him out for his work. Their styles worked well together and Buffington provided a shining reference for Ellis when he and his wife adopted a Swedish orphan they named Charlie. Harvey Ellis came to St. Joseph in 1889, hired by Eckel and Mann to draft plans for the St. Louis City Hall. Ellis was the highest paid employee at Eckel and Mann from 1889-1891, splitting his time between St. Joseph and St. Louis as construction on the City Hall commenced. Mann and Ellis moved permanently to St. Louis in 1891, creating numerous works for the city until 1893 when Ellis returned to Rochester and restarted the firm with his brother as Charles S. and Harvey Ellis, Architects. Harvey passed away January 2, 1904 leaving a legacy of art and architecture.