The New York Yacht Club building was constructed in 1900, at the height of the country's Gilded Age excess. Its founders were among the wealthiest businessmen in the United States. The building, which replaced an earlier and smaller facility, occupies land donated by J. Pierpont Morgan, himself a "Commodore" in the Yacht Club. The Neo-Baroque building, adorned with numerous reference to the sea and sailing, is listed on the National Register of Historic Places. 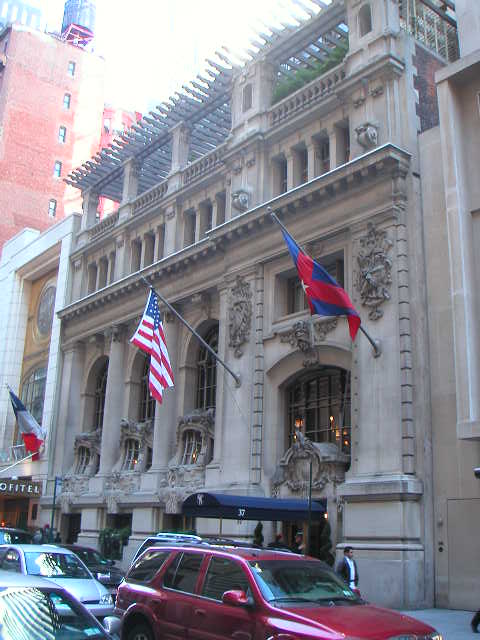 Detail of the Yacht Club's windows, inspired by galleons and with seaweed dripping over the edge 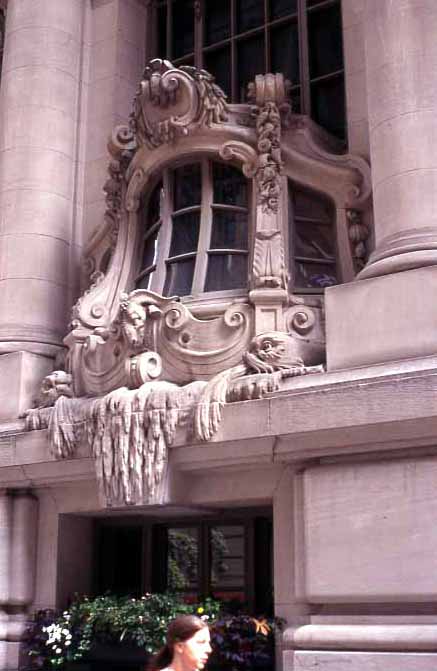 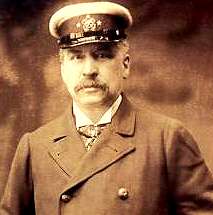 The New York Yacht Club's first clubhouse was built in 1845 in Hoboken, New Jersey. The club eventually outgrew its original facility and then moved to several other locations throughout New York and Connecticut. By 1898, the club was meeting on the second floor of a house on Madison Avenue that was filled with maps and model ships.

That year, J. Pierpont Morgan, who was then serving as Commodore, or President, of the Club, announced that he would donate three lots on West 44th Street for the construction of a new clubhouse.

The new clubhouse was designed by Warren and Wetmore, the same firm which designed the exterior of Grand Central Station. The firm was chosen after a competition that included more than a dozen architects. The final design included three huge, galleon-style windows on the front that bowed out over the sidewalk and appear to drip seaweed. Nautical imagery permeates the building, leading the New York Times to state that "except for the absence of motion, one might fancy oneself at sea."

But the centerpiece of the building, as its members intended, is its model room. Members asked the architects to design a room of approximately 3,800 square feet, with high ceilings, and space for 300 people. The model room remains the heart of the clubhouse; filled with maps, charts, and dozens of models--many of members' own yachts--the model room is, for all purposes, the club itself.

The building is a New York City Landmark, a National Historic Landmark, and is listed on the National Register of Historic Places.