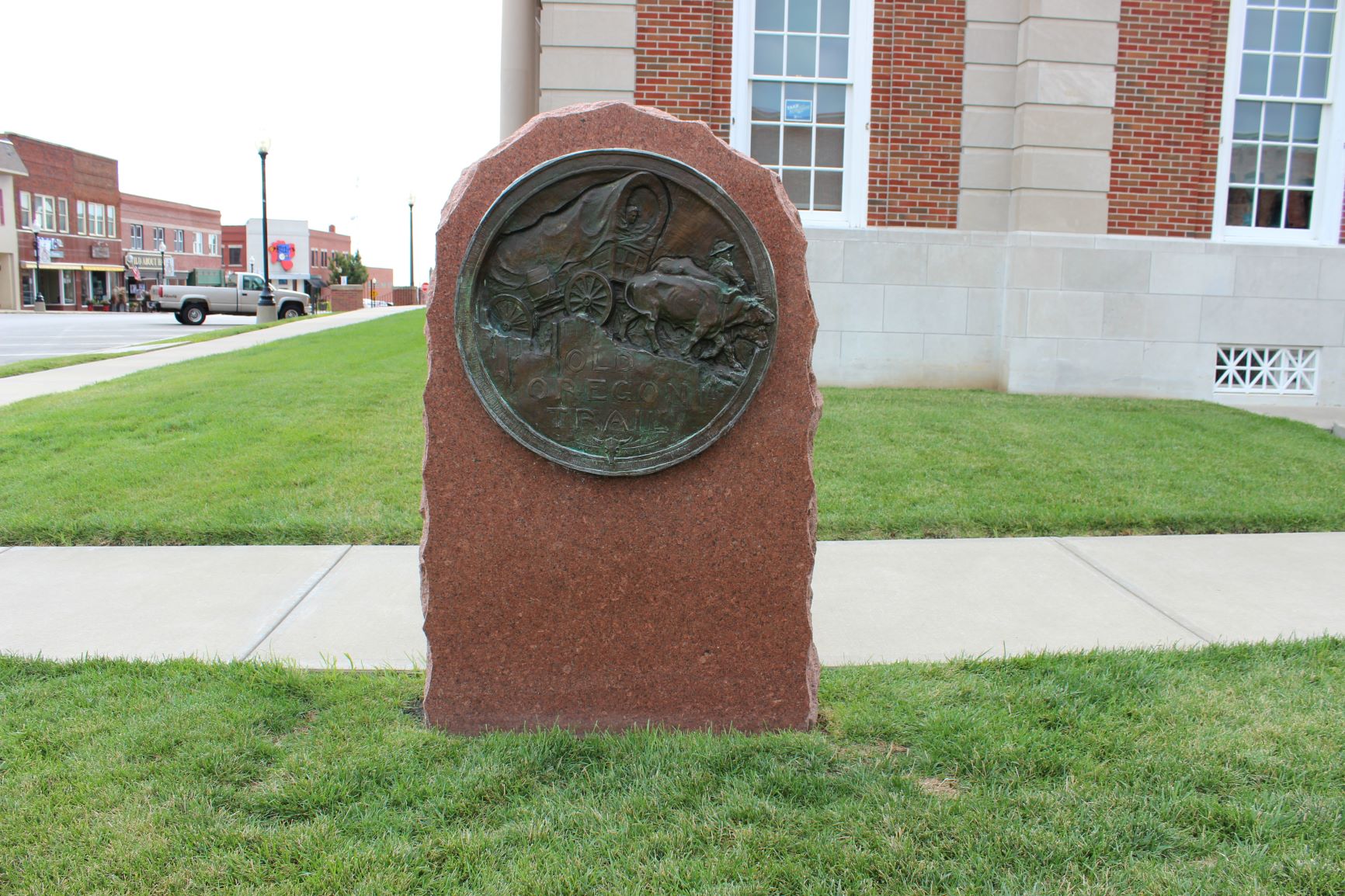 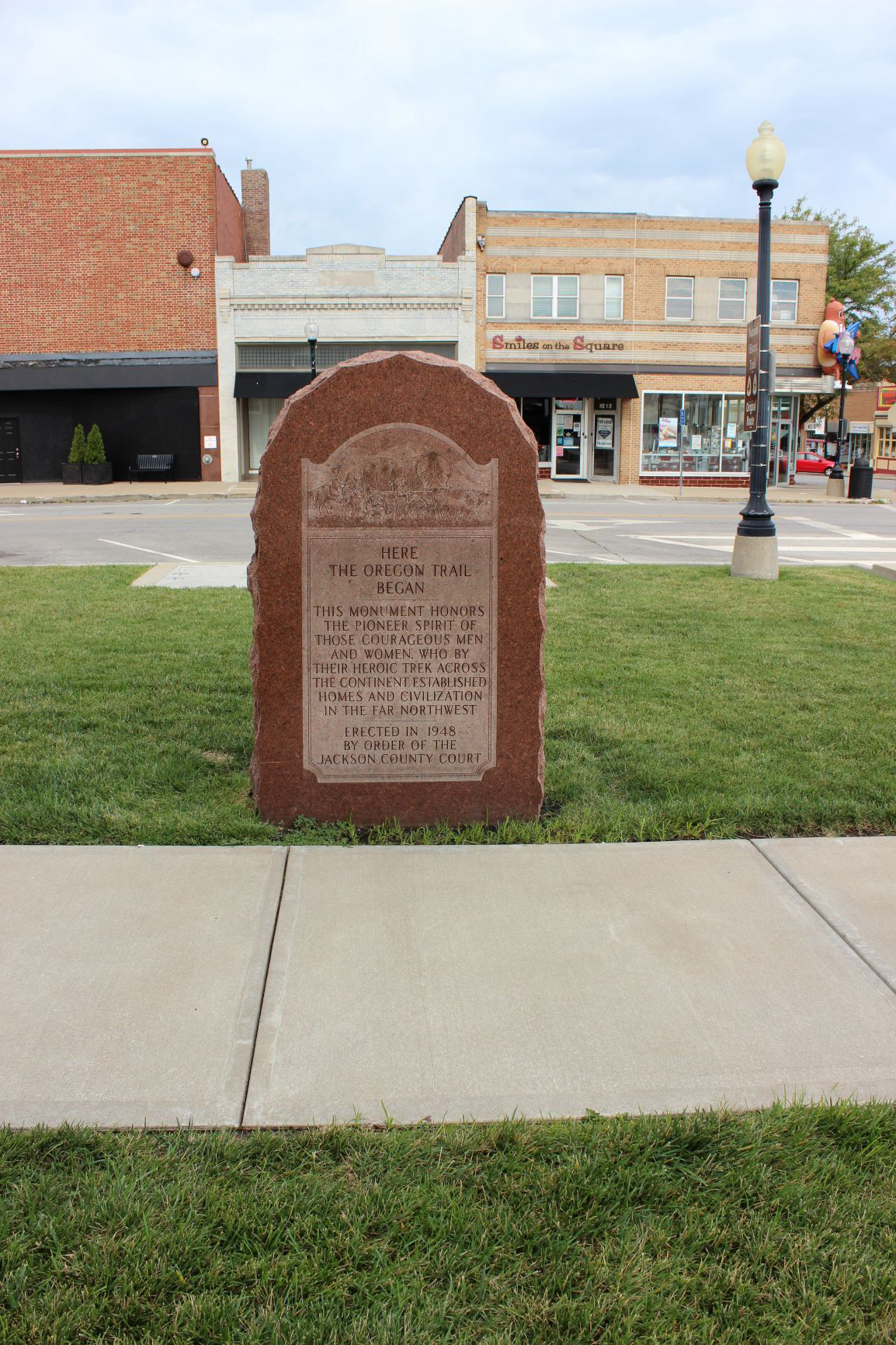 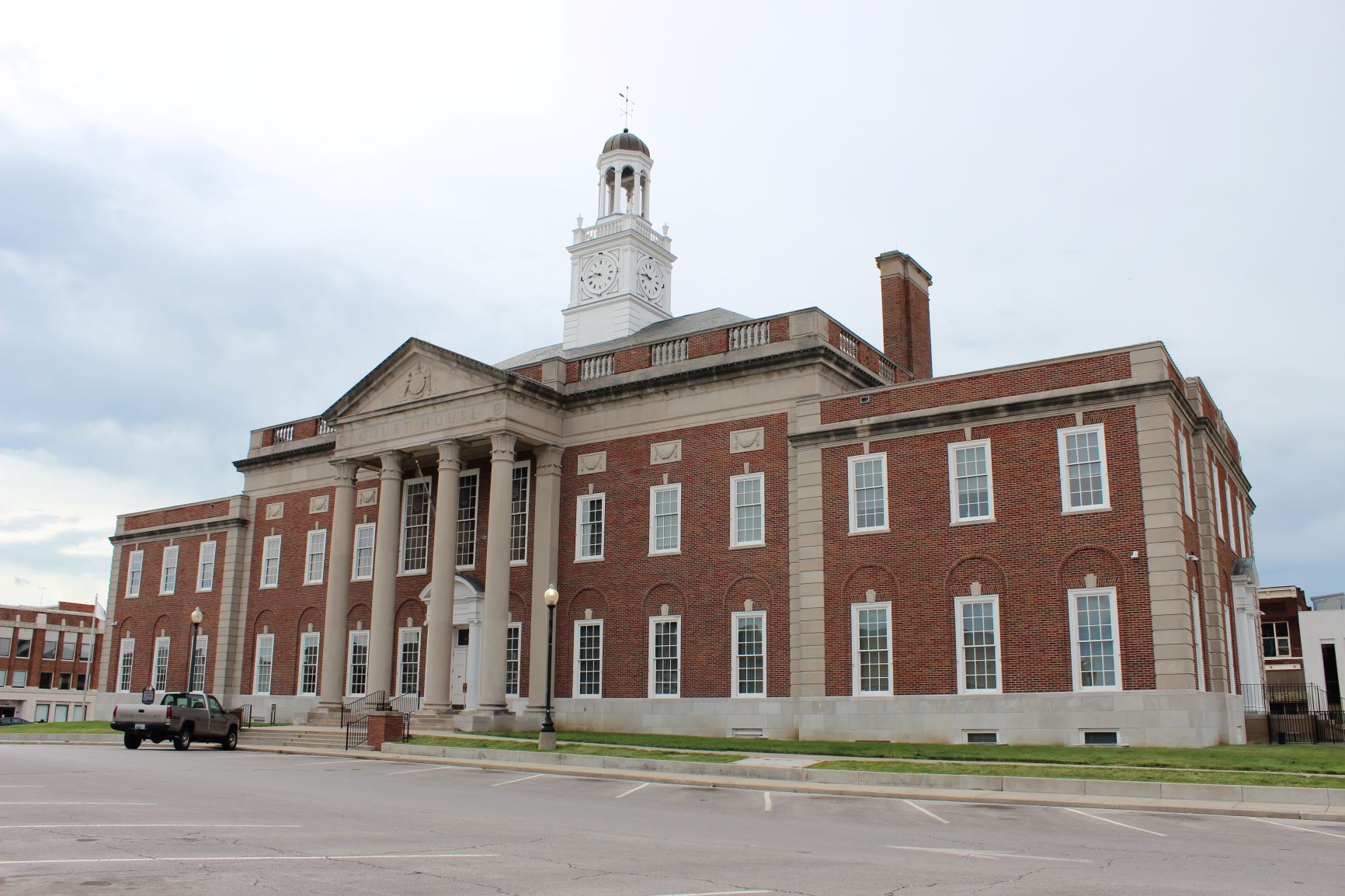 Avard Tennyson Fairbanks sculpted the Old Oregon Trail medallion in 1924 while teaching art at the University of Oregon. It depicts the hardships that the artist's ancestors and nearly 500,000 others experienced while traveling westward on the overland trail by covered wagon in the mid-19th century.

One 1852 migrant, Ezra Meeker, traveled back eastward along the trail in 1906 to seek the preservation of the Oregon Trail route. His efforts inspired Avard Fairbanks to sculpt a covered wagon drawn by oxen on the trail. In 1923 the Old Oregon Trail Association (OOTA) commissioned Fairbanks to design the organization's logo. That design was then cast as this 36-inch bronze medallion.

The medallion depicts a man driving the team of oxen that pull the covered wagon over rocky terrain. His wife rides inside the wagon, holding their infant child. Fairbanks placed a pioneer mother and baby inside the wagon at the top and center of the design to commemorate his grandmother. But Fairbanks' depiction of the trail experience was shaped as much by popular culture at the time of its sculpting as by historical reality. In fact, women and children typically walked along beside the wagons to spare their teams, particularly on rough terrain.

Fairbanks' depiction of trail life appears to have been influenced by W.H.D. Koerner's famous 1921 illustration Madonna of the Prairie. Koerner’s illustration was used as the cover image for Emerson Hough’s popular novel The Covered Wagon. Koerner’s instantly popular illustration portrayed the beautiful young heroine seated on a wagon box with the opening of the wagon cover forming a halo around her face. Koerner’s illustrations inspired the costuming for a silent film adaptation of Hough’s novel, which became the first western “epic” film. In the year before The Covered Wagon movie was released, only fifty identifiable western films had been made; in the year following its release, 150 westerns were made – and the industry maintained that level of production until it was eclipsed by television in the 1950s. Adaptations of Koerner’s covered wagon imagery pervaded the massive advertising for the movie. This gave Madonna of the Prairie a significant role in shaping public perceptions of settler women. It also appears to have shaped Avard Fairbanks’ conception of pioneer women in this medallion and in other pioneer monuments that he sculpted over the next 50 years.

The OOTA originally planned to use Fairbanks' Fairbanks’ design to mark the Oregon Trail route from Independence, Missouri, to Seaside, Oregon. An Old Oregon Trail medallion was soon cast in bronze and installed in historic Broadway Bridge in Seaside, near a Fairbanks medallion depicting the Lewis and Clark Salt Works. A copy of that medallion was placed in this Oregon Trail monument in Baker City, Oregon, the hometown of OOTA founder Walter Meacham. Fairbanks also reproduced the scene, renamed The Pioneer Mothers, for installation on the reverse of his 1928 Pioneer Mother statue for Vancouver, Washington.

Fairbanks' covered wagon design also was selected to print on a series of metal signs marking the Oregon Trail route. The states of Oregon and Idaho both ordered copies of the markers. But these smaller highway signs were not durable enough for highway use, and apparently were never installed.

In more recent years, Fairbanks' descendants have recast Old Oregon Trail for various sites along the Oregon Trail. The artist’s son, David Fairbanks, donated this casting of the medallion to the Independence-based Oregon-California Trails Association (OCTA). Two decades later, the OCTA and Jackson County, Missouri, installed the medallion on the lawn of the Historic Truman Courthouse on June 7, 2016. It was placed on the reverse of a stone marker first installed in 1948 marking the starting point of the Oregon Trail. The medallion's dedication ceremony also honored the 100th anniversary of the National Park Service.

Avard Fairbanks sculpted the Old Oregon Trail medallion in 1924 to commemorate settlers' experiences migrating westward on the overland trails. Over the past century, that medallion has been recast for various sites along the former trail route.