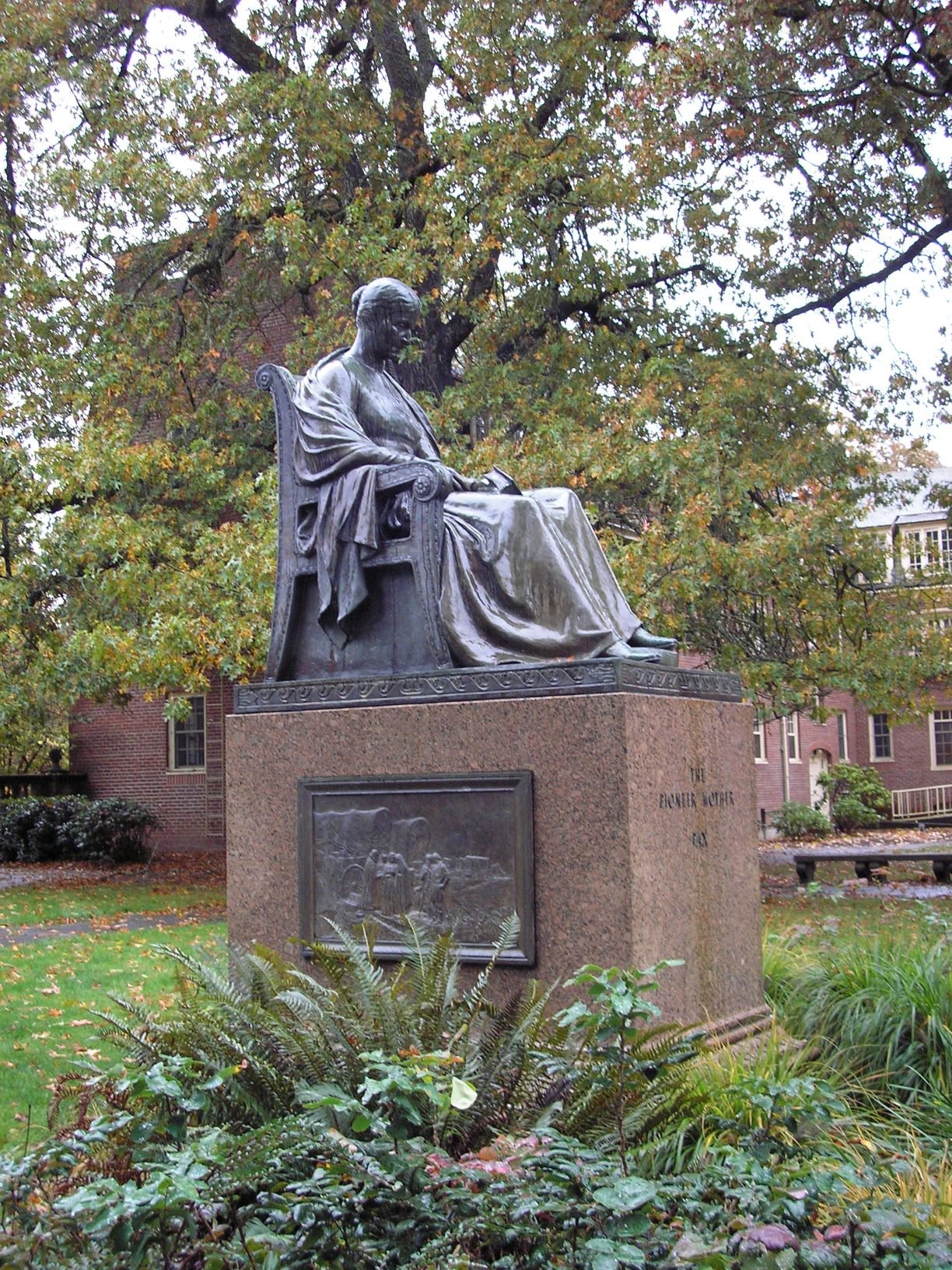 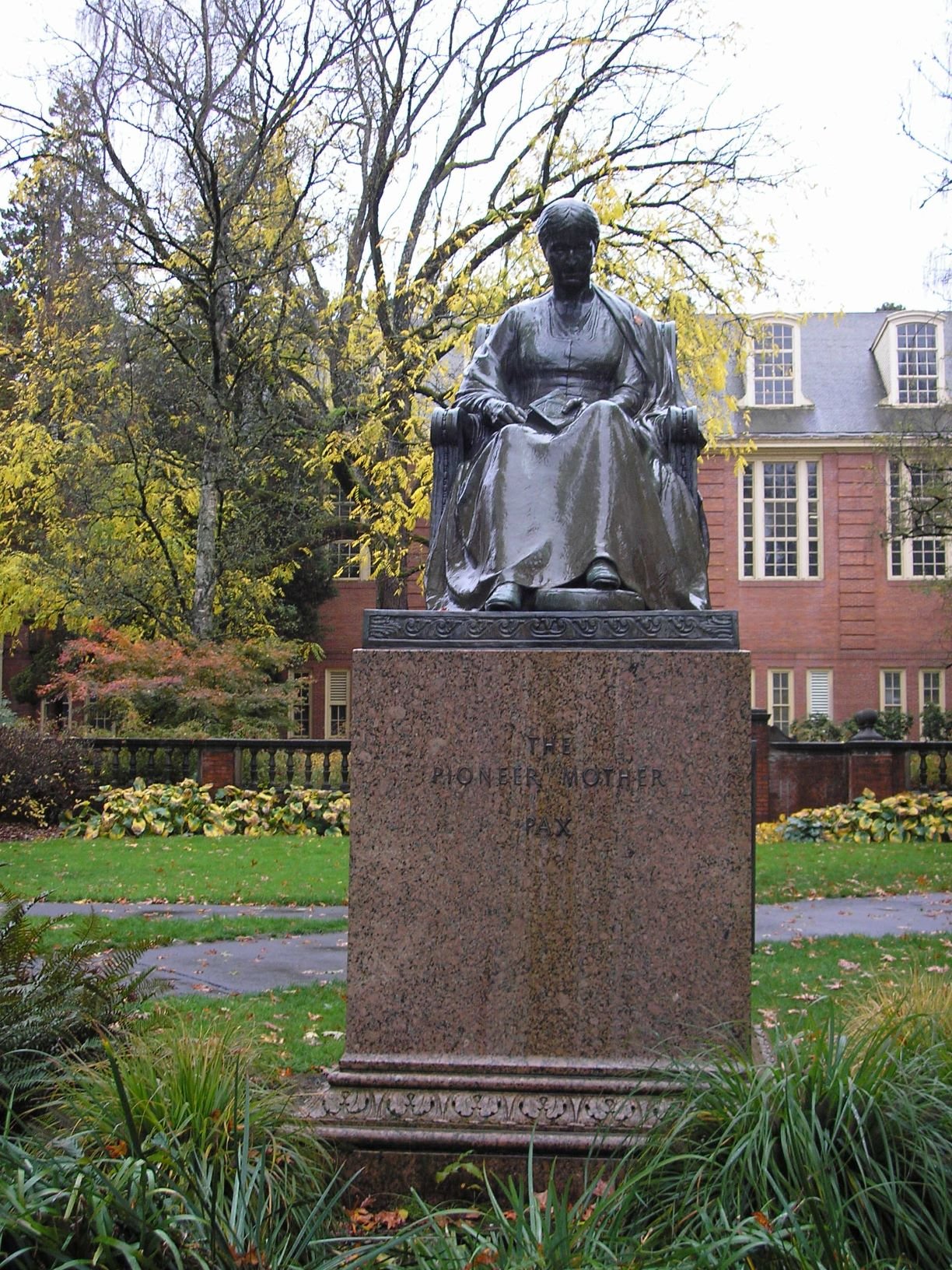 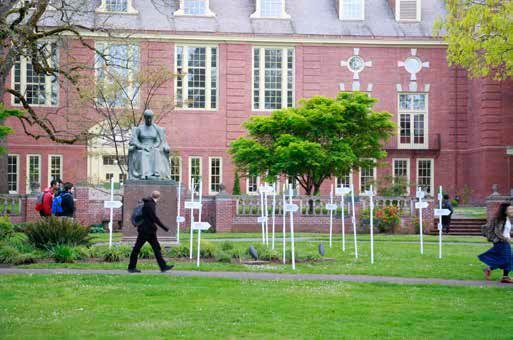 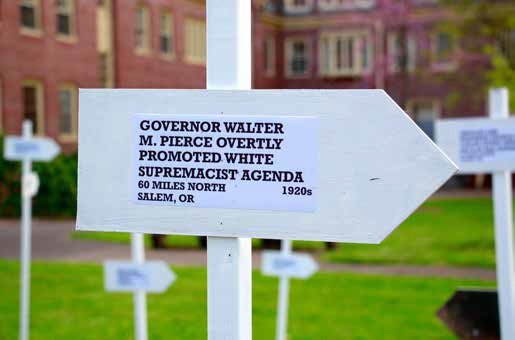 Dozens of public monuments celebrating frontier women in sunbonnets were erected between World War I and World War II. Most pioneer mothers sculpted in the late 1920s are depicted actively guiding their children westward. In this statue, donor Burt Brown Baker instead asked sculptor Alexander Phimister Proctor to depict an elderly woman resting from her labors, gazing contemplatively at the partially-open book in her lap. But like other pioneer monuments erected in this period, the Pioneer Mother celebrated white women bringing Euro-American “civilization” to the western United States. In recent years, students and faculty at the University of Oregon have begun to challenge its glorification of manifest destiny.

In the late 1920s, cities throughout the western United States put up statues honoring white “pioneer mothers.” Two of the best known were the widely publicized “Pioneer Woman” competition for Ponca City, Oklahoma, and the Pioneer Mother equestrian grouping in Kansas City, Missouri. New York City attorney Burt Brown Barker admired both those project. He decided to donate a pioneer mother statue to his home state of Oregon. In contrast to the Ponca City and Kansas City monuments, though, Barker did not the Oregon statue to emphasize the hardships of frontier life. Rather than memorializing the “battles and sorrows of pioneering” portrayed in other pioneer memorials, the donor explained to the sculptor that he wanted this statue to remember pioneer women as “they sat in the evening glow resting from their labors.” For

The completed statue depicts an elderly woman seated in a chair. She contemplates a partially-open book resting in her lap. By depicting the pioneer woman seated in an ornate chair resting from her labors, the A. Phimister Proctor emphasized frontier women’s domesticity. That image was in marked contrast to the active male Pioneer carrying a rifle and whip that Proctor had previously sculpted for the University of Oregon campus. That Pioneer Father—as he became known—stood posed to conquer the frontier.

Soon after commissioning the Pioneer Mother, donor Burt Brown Barker moved back to Oregon. He was appointed vice president of the University of Oregon with the understanding that he would not have to live in Eugene, and that he would not be paid. Instead, he and university president Bennett Hall agreed that his salary would help cover the costs of the pioneer mother statue.

The statue depicts Oregon’s pioneer mothers as the donor recalled his mother and grandmothers “drinking in the beauty and peace of the afterglow of [their] twilight days.”2 But the sculptor did not completely abandon his own interest—shared with many Americans at the time—in the hardships that women faced on the overland trail. On the left and right sides of the statue’s base Proctor installed bronze bas-reliefs depicting hardship and sorrow. In one, pioneers bury a dead family member beside their covered wagons. In the other a male pioneer cracks his whip over a team of oxen straining to pull a covered wagon up a steep slope. His wife is seated inside the wagon, clad in the sunbonnet typically associated with pioneer women.

On the front of the pedestal appear the words “The Pioneer Mother” and “PAX,” the Latin word for “peace.” On the back of the base is an excerpt from a letter written by donor Burt Brown Baker to sculptor A. Phimister Proctor soliciting what became the Pioneer Mother statue. In it, Baker dedicates the statue to the memory of “my mother, Elvira Brown Baker, a pioneer of 1847, in the sunsets of her life.” “But,” the plaque concludes, “to us there lives that spirit of conquering peace which I wish posterity to remember.”

What did Baker mean by a “conquering peace”? Elsewhere in the letter from which this epitaph was drawn, Baker described the ideal pioneer mother as a “helpmeet in blazing the westward trail that the course of empire might take its way, as the God of civilization has ordained.”3 In other words, pioneer mothers assisted pioneer men in the project of Manifest Destiny. Like many white Americans of that era, Baker believed that white settlers were responsible for spreading Christian “civilization” to a supposedly “savage” frontier. Thus female settlers like Baker’s mother were agents of the conquest of indigenous peoples.

One hundred years after their erection, the Pioneer statue stood in a highly visible location. The Pioneer Father is considered an important campus landmark and is included in campus tours for prospective students. The Pioneer Mother, though located only about 100 yards away, was in a less heavily traveled part of campus and few students know she exists.

In recent years, students and faculty began to question the legacy of white racial dominance at the University of Oregon. In April 2018 students created a temporary art installation called Peace (PAX) for Who? They surrounded the statue with white signposts documenting acts of racial injustice that occurred in the region. The art installation drew public attention to an often ignored statue. It also encouraged viewers to consider the racial implications of Burt Brown Baker’s tribute to early Oregon settlers.

In June 2020, protesters tore down the Pioneer Mother and "Pioneer Father" statues. The University of Oregon moved the statues to storage as it considered alternate ways to display the statues.