The Morris-Butler House is located in a neighborhood in Indiana known as the Old Northside, which is surrounded by Pennsylvania Street, College Avenue, 16th Street, and I-65. The Morris-Butler house, which is a Second Empire-style home, was designed by an architect named Diedrich A. Bolen. Diedrich built the home between the years of 1864 and 1865 for the Morris family. John D. Morris, the son of an Indianapolis pioneer, purchased a lot from Butler University’s founder Ovid Butler, in the Old Northside. Restorations have been made to the home, and it looks much like it did when the renovations were complete. Now, several educational programs, cultural events, and holiday performances are held at the home.

Frontal view of the home 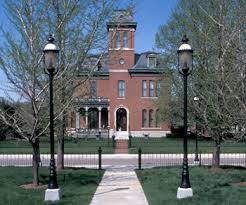 One of the rooms in the home 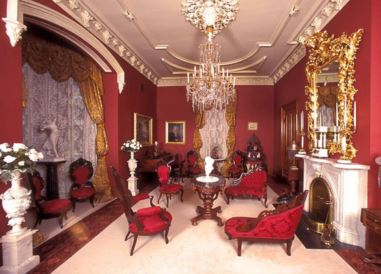 The Morris-Butler House is located in a neighborhood in Indiana known as the Old North Side, which is surrounded by Pennsylvania Street, College Avenue, 16th Street, and I-65. Many of those who were wealthy would build large houses on the lots that lined Meridian Street. Those who were not able to afford a lot on Meridian Street bought lots on nearby streets; this caused a residential expansion into what is now known as the Old North Side, along Pennsylvania Delaware, and Alabama Streets.

The Old North Side neighborhood soon became less attractive to the city’s wealthy population in the 1920s. The automobile became the major mode of transportation, and the city’s prosperous residents began to move even farther away from downtown to purchase larger lots. The residential landscape of the western half of the Old North Side began to change as profitable buildings and elegant apartment buildings replaced homes along Meridian, Pennsylvania, and Delaware streets. There was a housing shortage during and after World War II, and it led to the division of many larger homes into apartments. By the 1960s, landlords had begun to neglect the homes, and many people had vandalized the homes. By the mid-1970s, over half of the original houses of the neighborhood had been demolished.

The Morris-Butler house, which is a Second Empire-style home, was designed by an architect named Diedrich A. Bolen. Diedrich built the home between the years of 1864 and 1865 for the Morris family. John D. Morris, the son of an Indianapolis pioneer, purchased a lot from Butler University’s founder Ovid Butler, in the Old North Side. John Morris worked with the railroad as an agent and worked with the Capital City Planning Mill ten years later. When the economy saw a depression, John Morris defaulted on a loan, which led to bankruptcy in 1867. After the Morris family went bankrupt, they moved to Woodruff Place, a home that no longer exists today.

The Morris-Butler Home eventually fell into disorder because Florence Butler became a hoarder. When Miss Butler would order groceries, she lowered a basket with money from an upper window, to pay the delivery man. She would do this so the delivery man wouldn't have to enter her home. Many of the pieces from the house were sold at an auction after Florence passed away, and most of the furnishings in the museum are not from the original house.

The Park avenue Gallery operated the Morris-Butler House from 1957 to 1964. Many artists rented apartments and studios and shared a gallery space in the stairway and front hall. A man named Eli Lily urged the Historic Landmarks Foundation of Indiana to purchase the home, and he offered $22,500 to purchase and list it in the National Register of Historic Places. Due to lack of finances, the Morris family did not finish the interior spaces, so a restoration crew finally completed the job with architectural glass, hardware, and doors.

Today, the Morris-Butler House looks much like it did upon completion. The restoration work included repairing damaged floors, washing the darkened brickwork, and adding a new slate roof. The Morris-Butler home was opened to the public in 1969, and it now hosts several educational programs, holiday performances, and cultural events.