Charles Lundberg came to Austin in 1872 during a period of substantial Swedish immigration into the city. He built this bakery in 1876, choosing a location that was near Texas state offices and downtown businesses to attract potential customers. The bakery changed hands among several other families of Swedish immigrants through the Great Depression. The business faced competition from grocers and chains as the tradition of purchasing bread on a daily basis gave way to customer preferences for convenience. The original bakery closed in 1936 and the building was home to a variety of businesses in the decades that followed. Today, the historic building is home to the Old Bakery and Emporium which serves as a visitor's center, art gallery, and consignment shop. 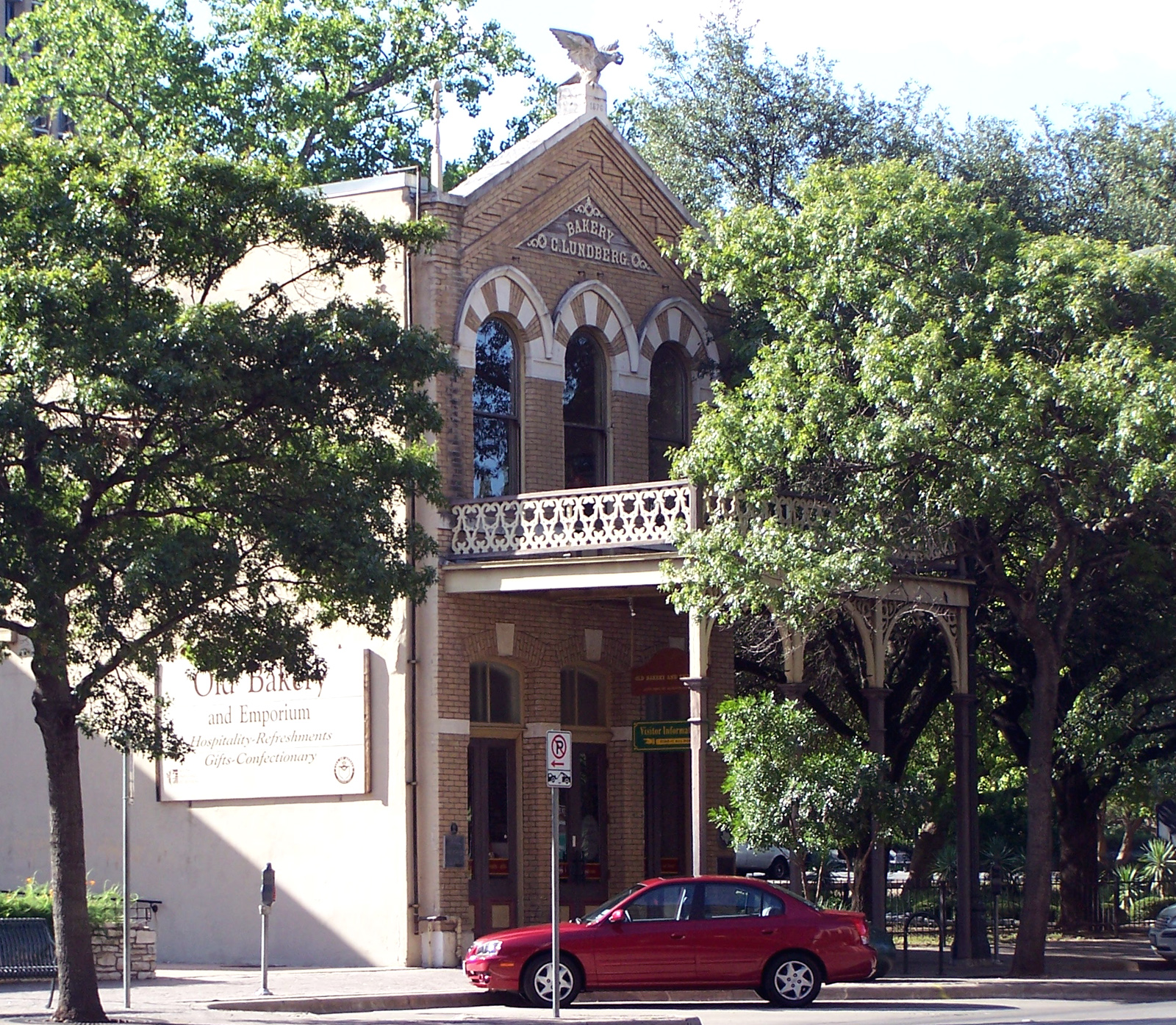 1890s photo of the Lundberg Bakery in Austin, TX. 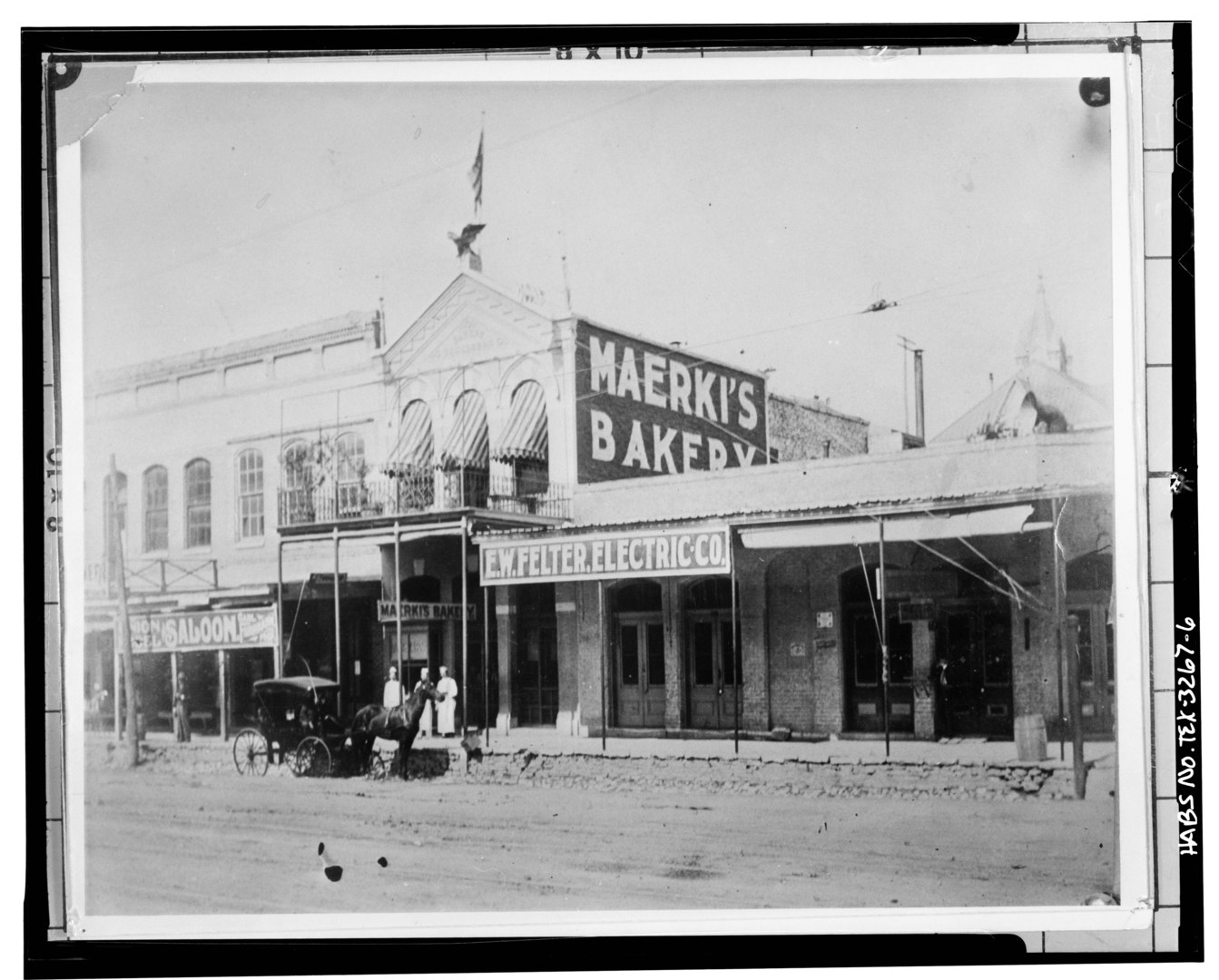 The limestone and brick Lundberg Bakery was built in 1876 by Swedish immigrant and baker, Charles Lundberg (1835 - 1895), who had settled into Austin during 1872 at a time when several Swedes moved to the Texas interior. Indeed, the bakery along with the Swedish Hill Historic District and Texas Wesleyan College are reminders of that Swedish influence.
As early as the mid-1830s, Swedes emigrated to Texas. When Swen Jaensson arrived 1844, he acquired a plantation near modern-day Houston and befriended Sam Houston, who urged him to recruit Swedish immigrants to settle the sparsely populated Texas interior. Roughly twenty-five Swedes moved to the Houston area in 1848 but subsequently departed as a group for the Austin area. Over the next several decades, notably after the Civil War and before the Depression of 1873, numerous Swedish immigrants erected homes and opened businesses in downtown Austin; the Swedish enclave grew to become known as Swede Hill.
Lundberg arrived during this time, in 1872, and quickly enjoyed success as a baker in downtown Austin. He built the bakery in 1876 in the heart of the business and government districts of Austin, which gained him a noticeable amount of attention and notoriety; one can find numerous newspaper blurbs mentioning his name during the 1880s.
Lundberg died in 1895, leaving the bakery to his wife. She sold the bakery to Swedish national Henry Maerki, who lived there and ran the bakery with his wife until 1906 when they moved back to Sweden. In 1906, Maerki sold the bakery business to George Siglhofer whose name can be found in the sidewalk in front of the bakery.
The building functioned as a bakery until 1936 before finding itself the home to a variety of businesses, all the while suffering from aging. By the late 1960s, the state made plans to construct a new Texas Department of Transportation building on the property, but the Heritage Society Guild in Austin came to the rescue of the historic building after performing excavations next door and uncovering the foundations of a former state capitol building that was constructed in 1882.
The building has benefited from public and private funding since the late twentieth century, allowing it to be restored and updated. Today, it operates under the name "The Old Bakery and Emporium" and houses the Lundberg-Maerki Historical Collection. One will find a consignment store and an art gallery that showcases pieces from local artists, as well as an Austin visitor information center for tourists.