The Colonial Dames of America erected this Tupelo monument in 1923 to commemorate the arrival of Spanish explorer Hernando De Soto. De Soto and his men spent the winter of 1540-1541 in northeast Mississippi during their extended expedition in which they explored what is now the southern United States today. De Soto is credited as the first person of European descent to discover and cross the Mississippi River. Half of the men who began the journey with De Soto died during the expedition owing to disease and conflicts with Native tribes. After De Soto died in 1542 along the Mississippi River, his men decided to end the expedition. Diaries from De Soto's expedition only offer the perspectives of the Spanish explorers, but they remain one of the best sources of information related to the people of this region in the 16th century. While the Spanish Crown claimed vast sections of land, they also regarded De Soto's expedition as a failure owing to the lack of obvious mineral resources and concentrated their colonization efforts in other parts of the Americas. 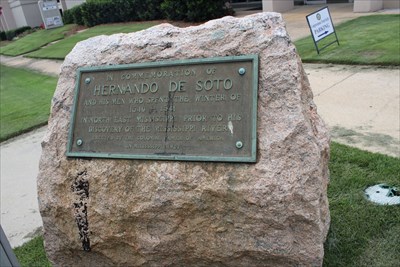 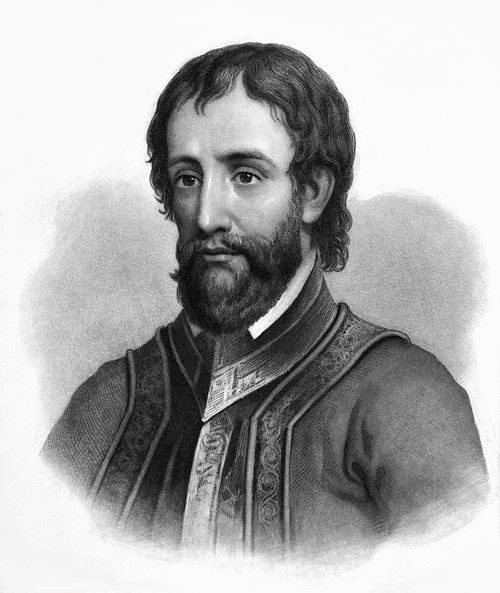 De Soto is believed to have explored territory from Florida to Arkansas and is credited with being the first explorer of European descent to discover the Mississippi River. The monument was erected in 1923 by the Colonial Dames of America and consists of a bronze plaque fixed to a pink granite boulder.

In 1539, De Soto began his expedition through territories that today make up the southern United States, landing with his men in Florida. From there he made his way westward through Georgia, Alabama, Mississippi, and most likely Arkansas. De Soto and his men had several battles with Indian tribes in the area, leaving them low on supplies.

De Soto and his men spent the winter of 1540-1541 in northeast Mississippi, near the Chickasaw Indian tribe. When spring arrived, De Soto demanded men from the tribe to help carry supplies. The Chickasaw refused and attacked De Soto's camp, destroying much of their remaining supplies. De Soto continued with his mission despite the lack of supplies, continuing west toward the Mississippi River. The location where De Soto crossed the path that later became the Natchez Trace Parkway is marked on the trail today. This location is near the city of Tupelo, where the monument is located.

Hernando De Soto died from a fever on May 21, 1542, on the banks of the Mississippi River. Before his death, De Soto appointed Luis de Moscoso Alvarado to take over once he had passed away. Once De Soto had passed, the leaders of the army decided to end the expedition. The men headed for the Spanish colony of Mexico City. De Soto started his expedition with 700 men, but by the end of the journey, only 300 to 350 remained.